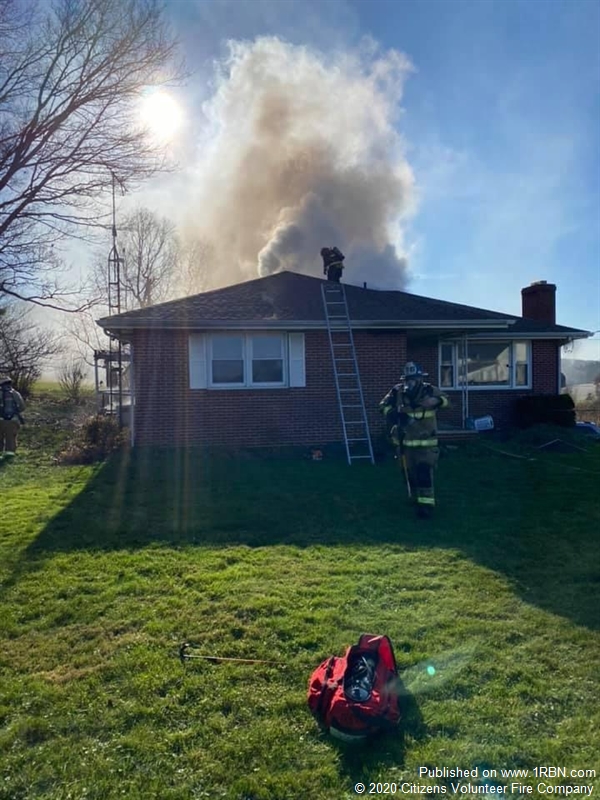 Photo by Citizens Vol. Fire CompanyCrews arrived with heavy smoke showing from the rear of the building and made an aggressive attack on the fire. 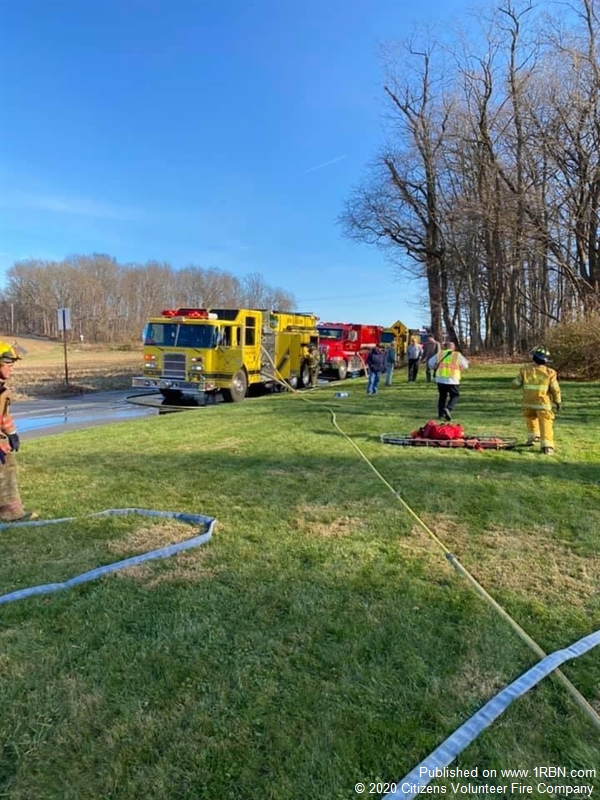 Photo by Citizens Vol. Fire CompanyThe first-arriving engines and tankers from Airville and Fawn Grove placed two cross-lays in service and made an initial attack on the fire before being joined by crews from Stewartstown and other companies.

Engines from Eureka (54), Airville (55), and Citizens of Fawn Grove (56), as well as tankers from Felton (77), Eureka, and Airville, trucks from Eureka and Red Lion (77), the heavy rescue from Shrewsbury (61), and a BLS ambulance from Eureka were dispatched.

Brush 54-2 from the East Hopewell Twp. building arrived with heavy fire and smoke showing from an enclosed porch to the rear of the structure and requested the working fire assignment, a tanker task force, and a second alarm. The driver of Brush 54-2 used the 300-gallon water tank to hold the fire at bay until additional help could arrive.

Tanker 56 from Fawn Grove was the second-arriving piece of apparatus on the scene, and the crew stretched a one-and-three-quarter inch cross-lay to initiate an interior fire attack. Tanker 55 and Engine 55-2 from Airville and Engine 56 from Fawn Grove arrived next. Tanker 55 supplied Tanker 56 with water and the crew from Engine 56 pulled another cross-lay off of Tanker 56.

Engine 54-2 and Truck 54 from Stewartstown arrived next, and the crew went to work with two cross-lays and made a search of the building. Eureka firefighters located and extricated two cats from the basement of the residence. Both survived and are expected to be okay.

As the first-arriving crews began to get the fire under control, the assignment was held to what was on scene. Extensive overhaul was performed by the crews on the first-alarm assignment, alongside crews from North-Hopewell Winterstown and Whiteford (Harford County). Resources from Dallastown, Maryland Line (Baltimore County), Rawlinsville (Lancaster County), Norrisville (Harford County), and New Bridgeville arrived and either assisted with manpower, water supply, or performed other duties before being released.

After approximately two hours of operation, the box was placed available. A crew from Eureka VFC remained on scene until the PSP Fire Marshal could arrive and perform their investigation. Thanks to the aggressive work of the companies on the scene, the bulk of the fire damage was held to the 'Charlie' side of the structure, with smoke and water damage throughout.