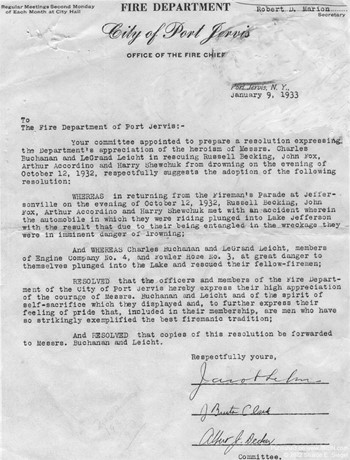 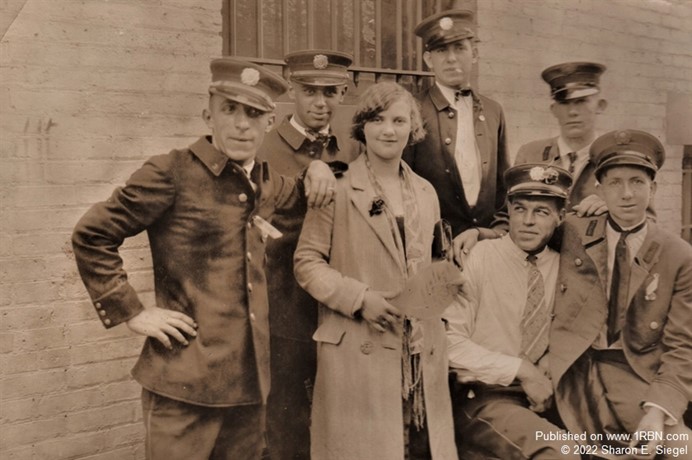 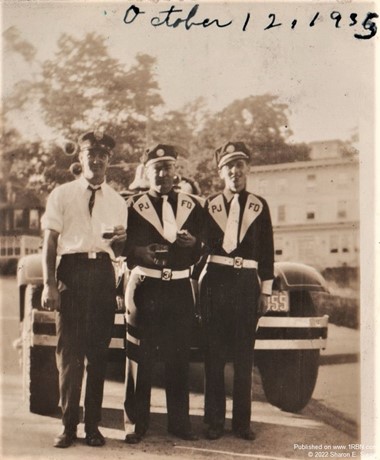 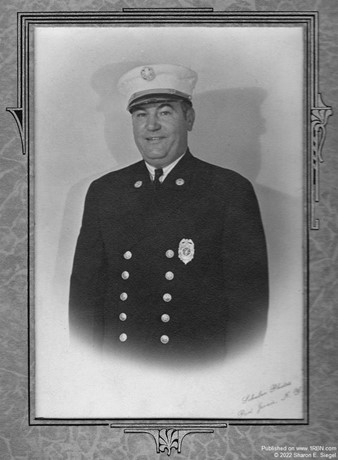 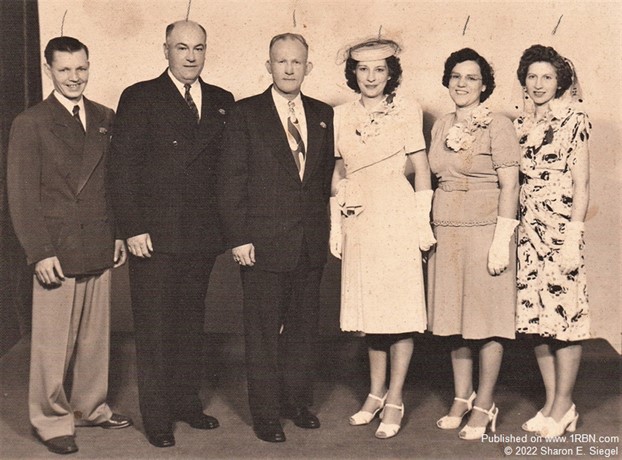 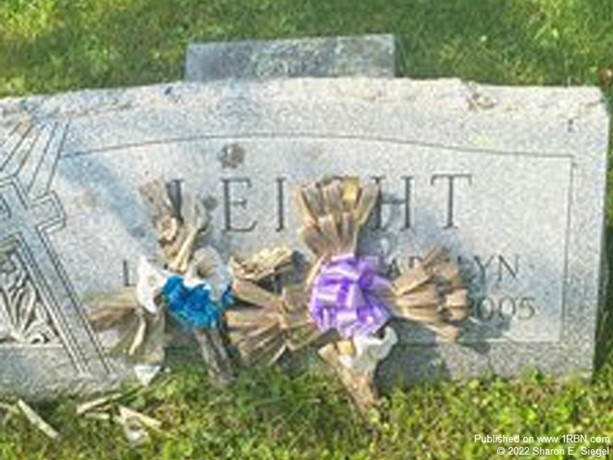 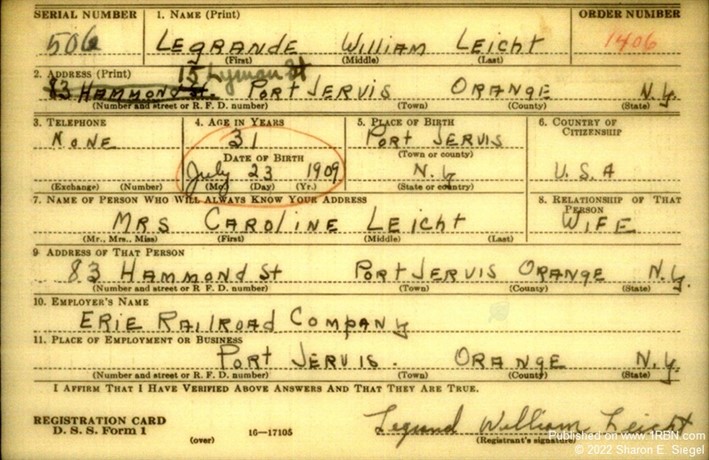 Photo by Sharon E. SiegelLegrand William "Bucky" Leicht lived a life of service, in many ways, as did his fellow firefighter Lester Buchanan, both of whom were commended for lifesaving efforts as firefighters in 1932 and went on to provide decades of firefighting and other vital services. 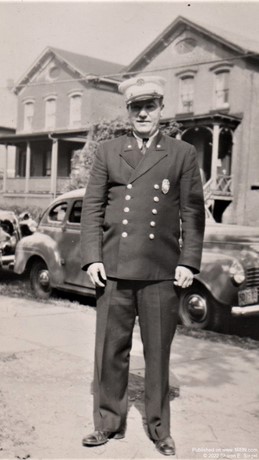 PORT JERVIS, NY – The year was 1932. The day, October 12th. The weather “beastly” according to news reports about an accident that imperiled the lives of six Port Jervis firefighters that evening, two of whom were later recognized as heroes.

The six firefighters were members of Port Jervis Fire Department and among the 125 who had traveled from Port Jervis to participate in Sullivan County’s Fourth Annual Volunteer Firemen’s Association Parade in Jeffersonville that afternoon. It was Sullivan County’s largest parade to date, with the streets and sidewalks filled with participants and spectators.

A newspaper article noted the day’s weather was seemingly “the very worst of the whole year”, yet 1300 firemen (rather than the 900-1000 that had pre-registered) turned out for the parade. An additional “couple hundred ladies and others” were said to have accompanied them, having joined others along the parade route.

Following the afternoon parade, six of PJFD’s firefighters – Russell Becking, John Fox, Arthur Accordino, Harry Shewchuk, Charles Buchanan, and Legrand Leicht – were traveling in a new Chrysler sedan to a dinner at the Lake Jefferson Hotel. They lost control of their vehicle as another car approached theirs, and their sedan plunged down an embankment and into Lake Jefferson.

An article in the Sullivan County Record, dated October 13, 1932, reported the young firemen as having “lost direction” as another car approached theirs on a curve. Their sedan went over a wire cable railing near the hotel, tumbled down a 25-foot embankment, and came to rest on its left side – submerged in Lake Jefferson. The car and its occupants landed about six-feet under water, near a lake shore.

The article noted that the car had not sustained much damage, and its lights had actually remained on, even under water. The lives of the firemen, however, were greatly endangered.

Five of the firemen somehow managed to make their way out of entanglement in the car. The driver of the car, Russell Becking, remained stunned and inside. According to the news article, Becking had hit his head against the car and sustained a gash to his forehead. Two of the firefighters who had been traveling with this driver dove back into the water, dragged him out of the car and laid him on shore where artificial respiration was applied.

These two rescuers, Charles Buchanan and Legrand Leicht, were later presented by PJFD with a commendation for their heroism. The commendation was prepared by an appointed city committee that was asked to express in a resolution the appreciation of the city’s fire department for heroic actions taken by the two to rescue their fellow firemen.

A letter to Port’s fire department, signed by committee members Jacob Lehn, J. Bueta Clark, and Albert J. Decker and dated January 9, 1933, states that Buchanan and Leicht rescued Russell Becking, John Fox, Arthur Accordino, and Harry Shewchuk, saving them from drowning on the evening of October 12, 1932. It respectfully suggests the adoption by the fire department of the following resolution:

“WHEREAS in returning from the Fireman’s Parade at Jeffersonville on the evening of October 12, 1932, Russell Becking, John Fox, Arthur Accordino and Harry Shewchuk met with an accident wherein the automobile in which they were riding plunged into Lake Jefferson with the result that due to their being entangled in the wreckage they were in imminent danger of drowning;
And WHEREAS Charles Buchanan and Legrand Leicht, members of Engine Company No. 4, and Fowler Hose No. 3, at great danger to themselves plunged into the Lake and rescued their fellow-fireman;
RESOLVED that the offices and members of the Fire Department of the City of Port Jervis hereby express their high appreciation of the courage of Messrs. Buchanan and Leicht and of the spirit of self-sacrifice which they displayed and, to further express their feeling of pride that, include in their membership, are men who have so strikingly exemplified the best firematic tradition.”

Charles Elmer Buchanan: Born January 1, 1909 in Port Jervis, NY. Died September 8, 1988. Buried Pine Hill Cemetery, Sparrowbush, NY. Charles Elmer Buchanan lived at 106 Front Street, Port Jervis, NY at the time of his WW II Army Registration in 1940, Serial #397. In the late 1940s he married Carrie M. Aber Buchanan, who had four children – Thomas F. Hazleton, Leonard H. Cooper, Barbara Jean Sutton, and Joyce M. Freund. He worked for the Street Department, City of Port Jervis in his younger years, and in the yards for the Erie Railroad in his career. While in the Army, he served in WWII and was on the ground and served in battle during the Battle of Normandy. One of Charles Elmer Buchanan's brothers (James Lester Buchanan) served as Chief of Port Jervis Fire Department from 1942-1953.

Legrand William “Bucky” Leicht: Born July 23, 1909 in Port Jervis, NY. Died December 5, 1978. Buried in Hainesville Cemetery, NJ. Legrand William “Bucky” Leicht was born to William and Etta Leicht at St. Francis Hospital, Port Jervis on July 23, 1909. He was a lifetime resident of the area and lived at 15 Lyman Street at the time of his death. Legrand worked for the Erie Lackawanna Railroad and he and his wife had a small restaurant on Front Street/Jersey Avenue, Kay’s Lunch. It was through his work on the railroad that Legrand registered for military service in 1940, Serial #506, and assisted in supplying needed military supplies as a citizen. Legrand was a member of First Presbyterian Church of Port Jervis and a life member of Delaware Engine Co. No. 2. His wife was Carolyn “Kay” Kent Leicht. He had two sons, William and Kenneth Leicht, and one daughter Sandra Leicht Scott, all born at home in Port Jervis, NY. His sisters were Mary and Sarah.