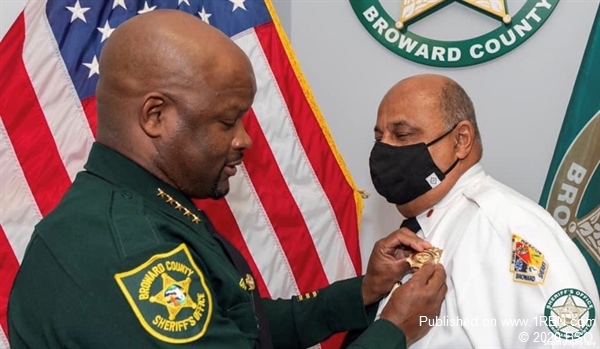 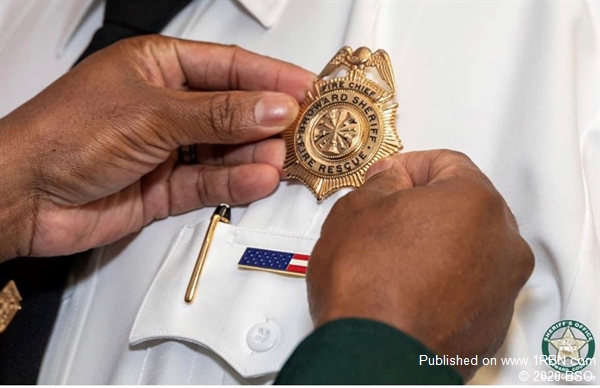 Photo by BSOCloseup of Fire Chief Gregory Holness receiving his badge as he is appointed Chief of Department of Fire Rescue. 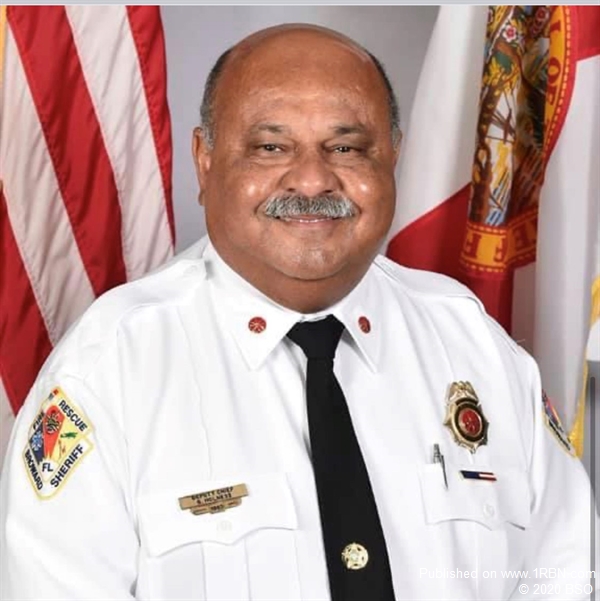 Broward County, FL - The Broward Sheriff’s Office again makes history as Sheriff Gregory Tony announces the appointment of the first Caribbean-American as the next chief of fire rescue following the retirement of Fire Chief Joseph Fernandez.

In a statement, Sheriff Tony remarked, “I am pleased to announce the promotion of Deputy Chief Gregory Holness, a pillar in the Caribbean-American community, to chief of the Broward Sheriff Fire Rescue and Emergency Services Department. Throughout his 37-year career he has demonstrated sound leadership and is highly respected by BSO employees.”

Chief Holness, 59, began his career in 1983 as a paramedic and a member of the then Broward County Emergency Medical Services, which later merged with the Broward Fire Department to become Broward County Fire Rescue, and in 2003 became part of the Broward Sheriff’s Office to become Broward Sheriff Fire Rescue and Emergency Services. During that time, Chief Holness has risen through the ranks serving as a captain, acting battalion chief, operations district chief, assistant chief and most recently deputy chief of administration.

In 1994, Chief Holness was transferred from the field to the bureau of logistics where his responsibilities included the review, specification and purchase of fire and EMS equipment. He was also the primary architect of a nationally recognized Regional Logistics Program still currently in existence. His additional achievements included the co-development of the Common EMS Protocol, as well as many trade journal contributions and assisting in the development of a national standard on airway management. He was promoted to assistant chief in 2004 and transitioned to oversee areas such as Support Services and the operational districts of Lauderdale Lakes, Central Broward and Port Everglades.

Chief Holness has a bachelor’s degree in organizational leadership from Saint Thomas University and is a graduate and past vice president of the BSO Executive Leadership Program. He is also a graduate of Florida International University’s Strategic Management Institute, as well as the Florida Emergency Services Leadership Institute. Chief Holness currently is a member of the International Association of Fire Chiefs and Florida Fire Chief’s Association. Throughout his career, Chief Holness has received numerous commendations from municipal and civic organizations, not-for-profit enterprises as well as local public schools. In 2013, he was selected as the Community Partner of the Year by Boyd Anderson High School in Lauderdale Lakes for his contributions to the educational community. Chief Holness has long been a mentor to both departmental employees as well as local community members and shows no signs of slowing down.

Chief Holness' commitment to the fire service and relationships with community leaders will certainly take the Broward Sheriff's Office Department of Fire Rescue moving in an ever-forward direction.