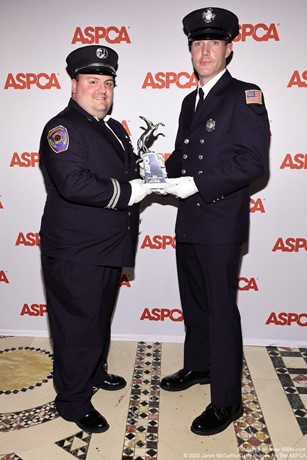 Photo by Jamie McCarthy/Getty Images for The ASPCA

Discovering two of the dogs were unconscious and barely breathing, the firefighters immediately began chest compressions and cooled off the dogs with a fire hose. The dramatic rescue was captured on video, inspiring people nationwide.

The rescued woman and all three dogs survived their ordeal thanks to these heroic firefighters’ skill and quick thinking. The collaborating departments—who serve more than 14,000 residents combined—acted not only on their duty but also on their deep compassion for people and animals in need.