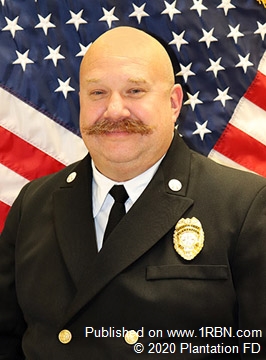 Lubow is a 26-year veteran of the Department who worked his way from volunteer firefighter to a full time paramedic with the EMS Division.

Ezra joined the fire department in 1994 as a volunteer firefighter. In 1997 he left the volunteers and became a full time employee as a paramedic with the EMS Division.

Lubow also serves as the Department’s Health and Safety and Infection Control Officer. This year he was tasked by Mayor Stoner to coordinate the City’s response to the Covid crisis.

He also recently developed and implemented a Podcast to help keep Plantation residents informed about the Coronavirus and the City’s activities regarding the response.

Lubow also operates his own Podcast entitled “A Paramedic’s World” which can be found on Apple Podcasts, Spotify, and Google Podcasts. He holds a Bachelor’s degree from Columbia Southern University in Occupational Health and Safety and is working toward his Master’s degree in Emergency Management.

He lives in Coral Springs with his wife Erin and two children Asher and Alora.