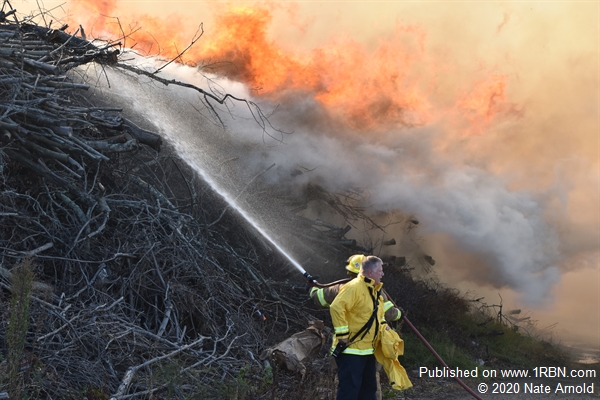 Photo by Nate Arnold Crews were fighting an uphill battle against fire and wind. 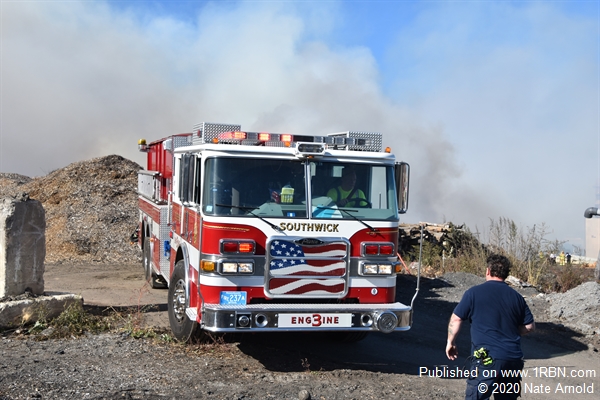 Photo by Nate Arnold The smoke column was reportedly blowing as far North as South Hadley, a town in Hampshire County some 25 miles North of the fire scene. 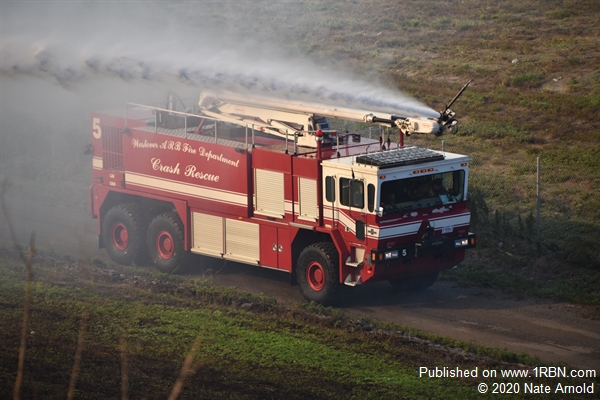 Photo by Nate ArnoldEven Aircraft Rescue and Firefighting vehicles were involved in this effort!

Agawam, MA - A compost pile spontaneously combusting at the Bondi's Island Landfill in Agawam on a sunny, windy Thursday afternoon in October began what would become the largest and most complex, logistically, firefighting operation in recent Hampden County history.

Agawam fire crews were summoned to the yard waste disposal area of Bondi's Island at 1:00 P.M. on October 15th, when passersby on Route 5 and Interstate 91 noticed large volumes of smoke starting to rise from the landfill. The first Agawam crews on scene encountered three large, 15-foot high by nearly 300-foot long, compost piles burning, with more piles beginning to smolder.

A second-alarm was sounded, bringing all remaining Agawam firefighters to the scene and moving West Springfield into town for coverage. Complications in the fire fight arose almost immediately and multiplied quickly. First, the only hydrant on the property was the equivalent of five stories below the fire ground, down the hill and 3000-feet from the burning piles. Second, the annoyingly strong and persistent wind was blowing from the south and fueled both the fires' intensity and spread. Third, the fire was burning with such intensity that the landfill operator, Covanta's, on site crews were fearful of using their heavy equipment to tear apart the piles which would have expedited the fire fighting operation.

Several more alarms were sounded to bring in enough equipment from neighboring departments so as to set up a four engine relay pumping operation, but even that wasn't enough. The state's large incident mobilization plan was activated to set up a tanker shuttle operation to overcome the water supply issue on site and this tanker shuttle operation would become the largest in Hampden County history, involving over two dozen departments from Northern Connecticut and Western Massachusetts and stretching into a five day event.

When the fire was finally declared extinguished on Monday morning, over two million gallons of water had been pumped on the fire and nearly 30 separate fire departments had taken part in the operation with over 100 firefighters involved in a round-the-clock fire fighting effort.