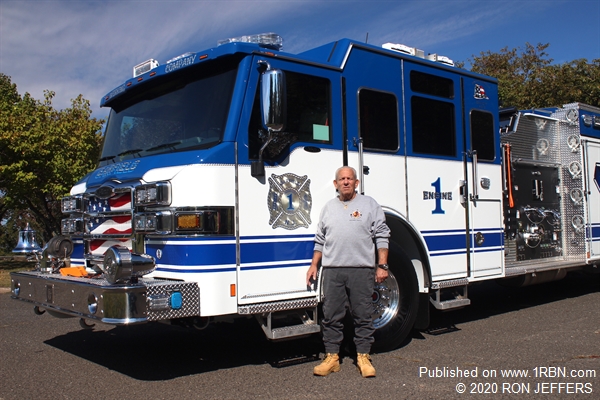 Garfield, NJ - On an October Sunday morning, members of Engine Co. 1 assembled at their quarters for training and to go over their newly delivered Pierce top-mount pumper. Along with active members, retired company firefighter Rich Wolfson also stopped by to see his old-time friends, younger members and the new rig. He became the center of a conversation concerning a recent “job.” This firehouse has a lot of memories for Wolfson, and many others that were not officially company members, but still became part of the firehouse.

Wolfson became a volunteer firefighter with Company 1 in 1974. He retired from the department in 2010, and is currently employed as a senior fire investigator. Wolfson loves his job, which is evident with his many conversations on investigation procedures. He has also been a life-long fire scene photographer.

In the mid-1980's, Wolfson decided to assemble a small group of photographers, at Company 1's firehouse, that shared his interest of fire scene photography. His purpose was to promote the fire service, especially in New Jersey, and to utilize photography for investigation purposes, training, fund raising and to document the brotherhood of the fire service.

This group of photographers met one Sunday afternoon, when Company 1 housed a white Hahn quad apparatus and, in 1985, the New Jersey Metro Fire Photographers Association was formed, with 12 members.

Garfield Company 1 is part of the photo organization's history and part of Wolfson's life. Younger members of the company may not know this part of their firehouse history. Many of the club's regular and committee meetings were held here. Photo night rehearsals were also part of the back room club activities. In addition, many good times, bonding, and a lot of laughs.