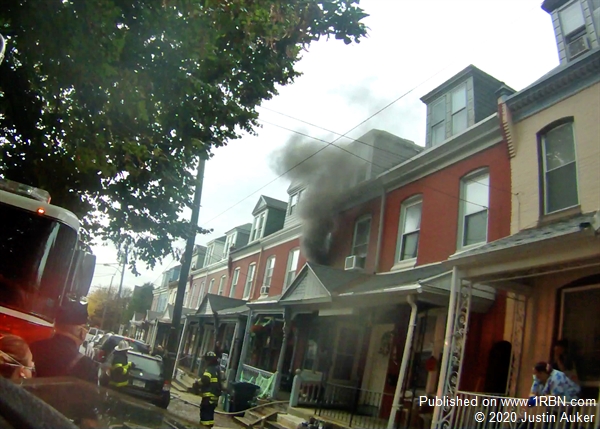 Photo by Justin AukerFirefighters from Engine 9 and Ladder 1 arrived nose-to-nose at this bedroom fire on Thorn Street in Reading.

Reading, PA - On Friday morning, October 16th, several companies from the Reading Fire Department were sent to the fire academy for training on confined space rescue. Around 10:20 A.M., the Berks County Department of Emergency Services call center began receiving calls reporting a house on fire in the 800 block of Thorn Street.

Ladder 1 and Engine 9 arrived with smoke showing from the second floor of a two-and-a-half story MOR dwelling. As firefighters began a hose stretch into 830 Thorn St., the occupants reported that everyone was out of the home. Chief Stoudt (Car 1) arrived and requested an Engine and Rescue be released from training.

The fire was located in a second-floor bedroom in the middle of the home. All searches were clear and no injuries were reported. The fire was placed under control at 10:40 A.M. The Fire Marshal's Office is investigating. Units from West Reading and Muhlenberg Twp. were also requested to assist.