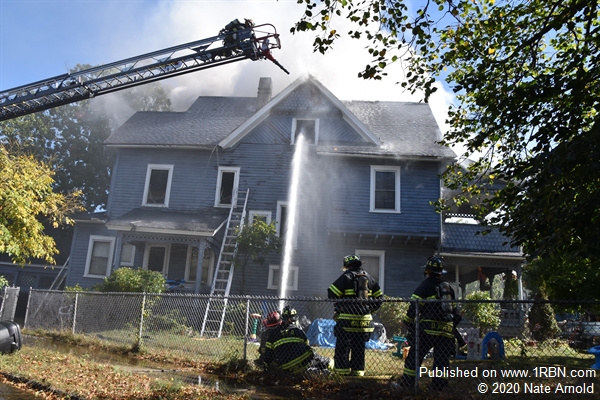 Photo by Nate Arnold A ground monitor is played into the 'Bravo' side as Truck 2's ladder pipe waits for water. 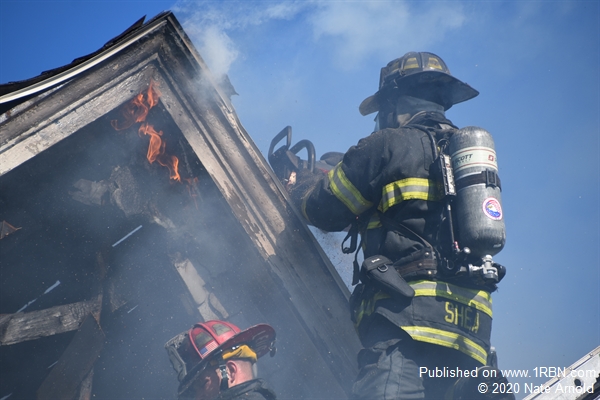 Photo by Nate Arnold FF Brendan Shea of the Rescue Squad works to open a hot spot at the peak of the roof on the 'Alpha' side.

Springfield, MA - A fire reported shortly after noontime on Thursday, October 8th, burned the attic of a large, three-story Victorian style home in the Hill-McKnight neighborhood of Springfield and displaced four residents along with injuring one firefighter.

Crews arrived on scene at 169 Princeton Street to find heavy smoke and fire venting from the attic and second floor of the large wood-frame home and began stretching lines to initiate an interior attack. Once on the second floor, companies encountered a hoarding/Collier's Mansion condition that slowed their progress, but they made every effort to get lines to the attic.

The hoarding condition, however, grew worse the higher up the men went and with fire now venting from the roof line, Princeton St. command ordered all members to evacuate the building and switch to a defensive attack for safety reasons. Once outside, crews stretched large caliber lines to multiple sides of the building and opened up Truck 2 and Truck 4's ladder pipes to darken down the main body of fire.

Companies had the fire under control within 45 minutes, but then set about the arduous task of heading back inside to overhaul the building and check for extension. The overhaul operation alone stretched well into the afternoon and resulted in one member of the SFD receiving non-life-threatening injuries, but requiring transport to a local hospital for treatment.

The cause of the fire remains under investigation and the displaced residents were assisted by the Red Cross.