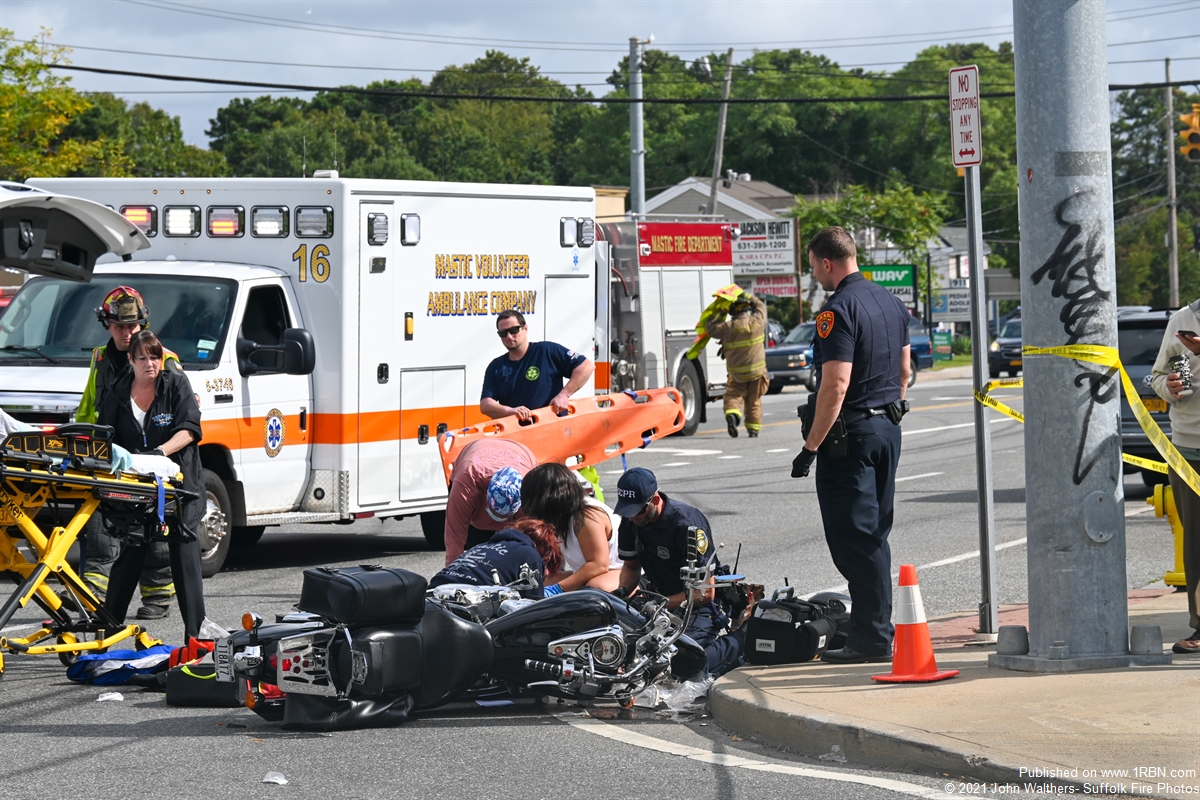 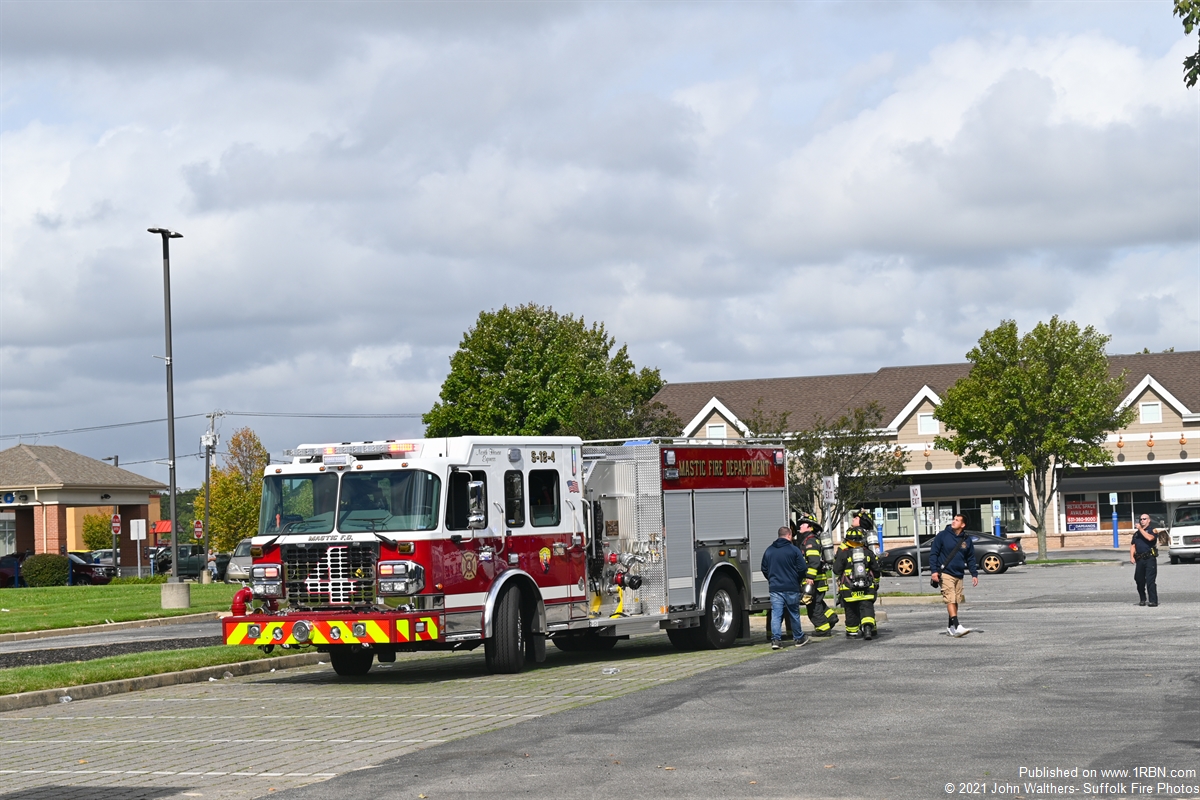 Photo by John Walthers- Suffolk Fire PhotosMastic FD Engine 5-12-4 standing by for a helicopter landing at a recent motorcycle crash. 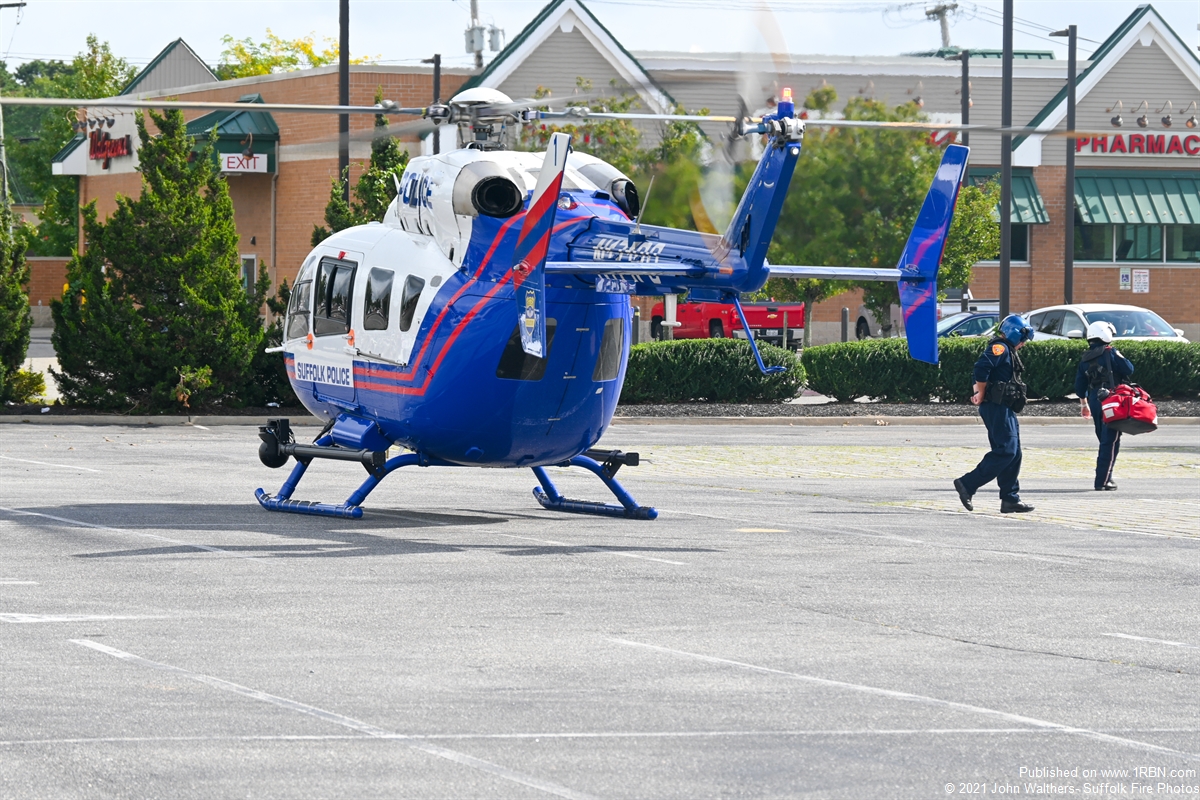 Photo by John Walthers- Suffolk Fire PhotosA Suffolk Police Medevac helicopter lands and the flight medic walks over to assist a motorcyclist who was injured in a crash. 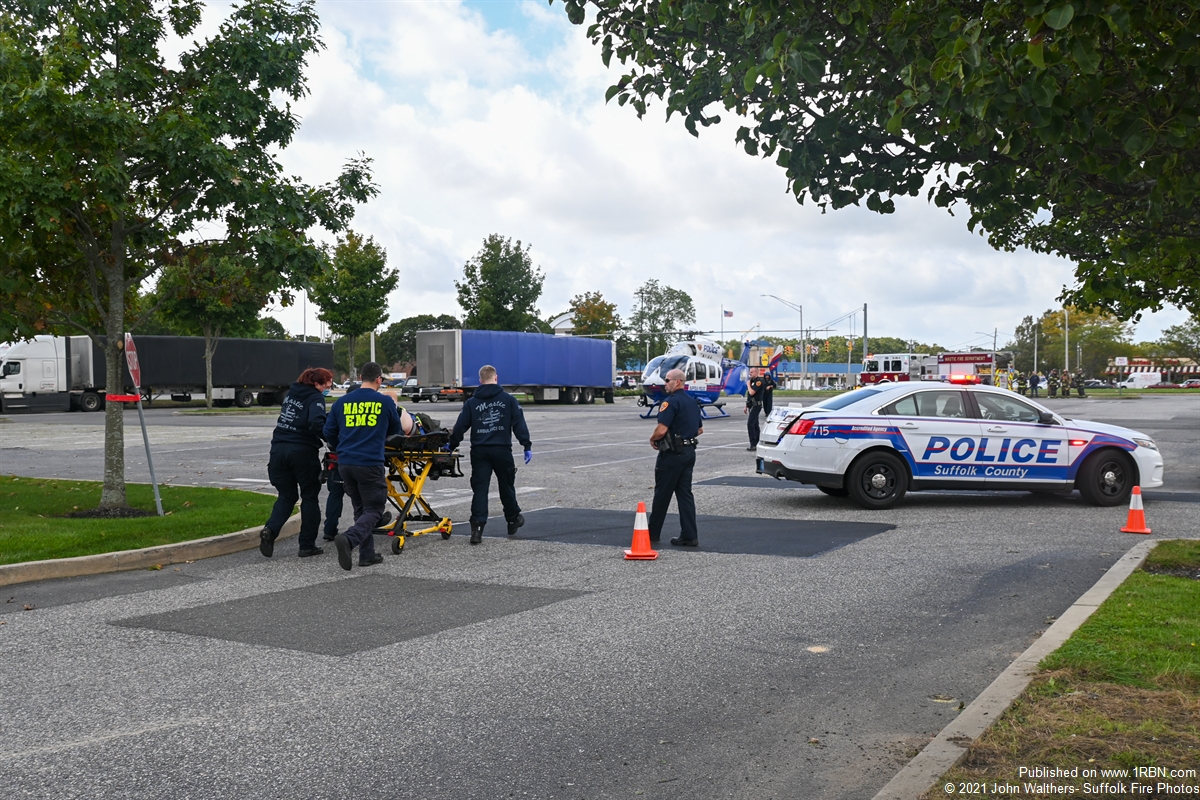 Photo by John Walthers- Suffolk Fire PhotosEms personnel bring a patient to an awaiting helicopter at a recent motorcycle crash . 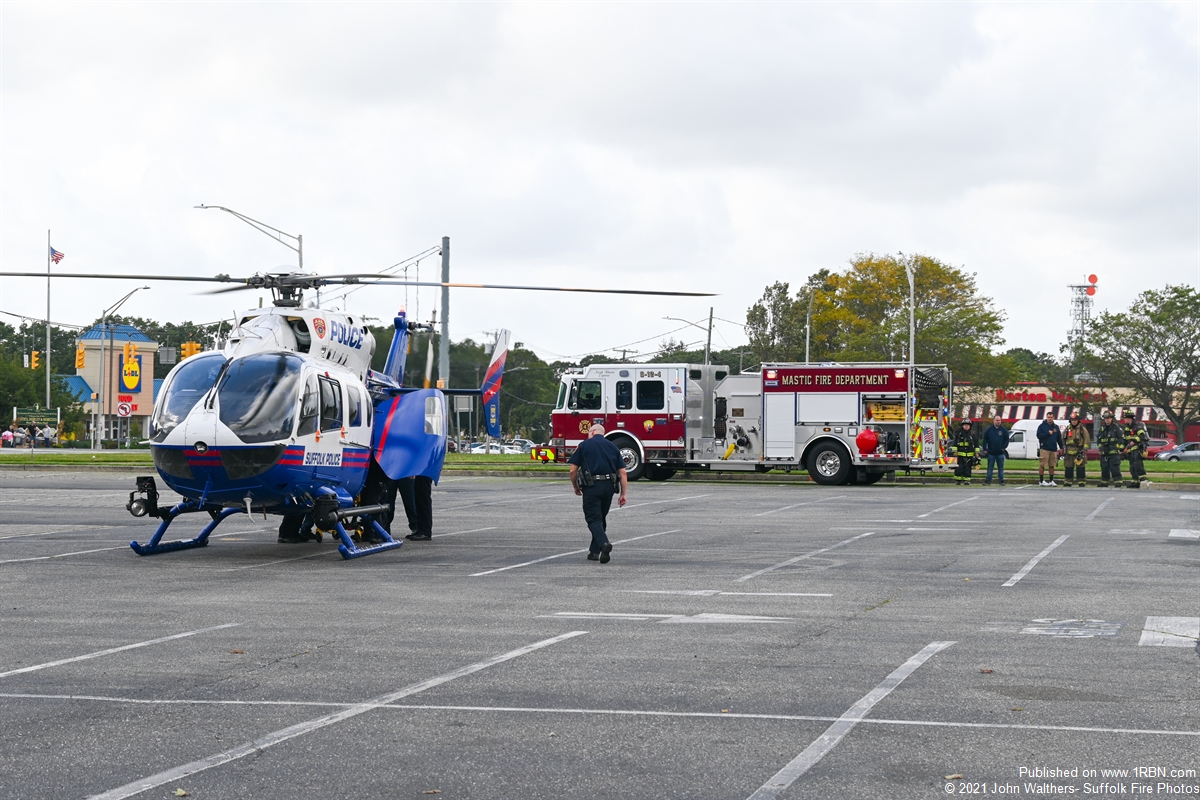 Photo by John Walthers- Suffolk Fire PhotosMastic Engine 5-12-4 stands by while a patient from a motorcycle crash is loaded into a medevac helicopter. 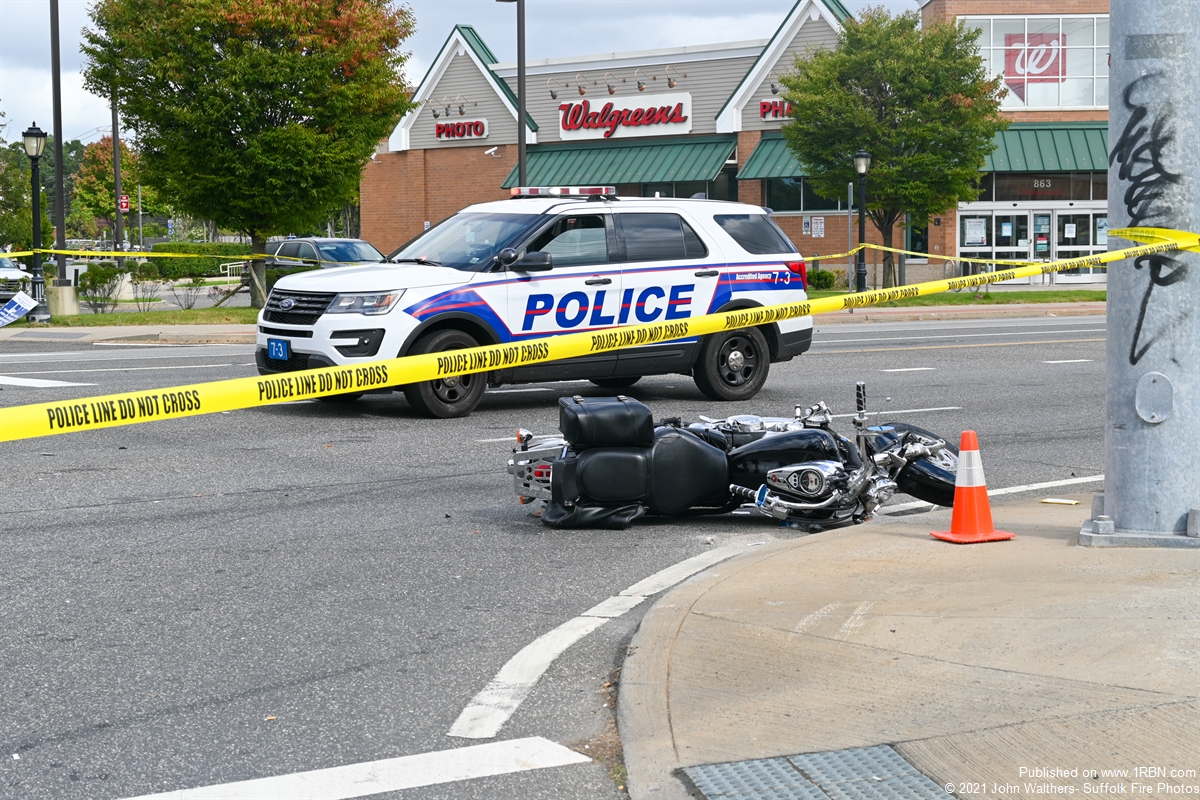 Photo by John Walthers- Suffolk Fire PhotosA motorcycle lays on the ground behind police tape after a motorcycle crash in Shirley on Montauk Highway recently. 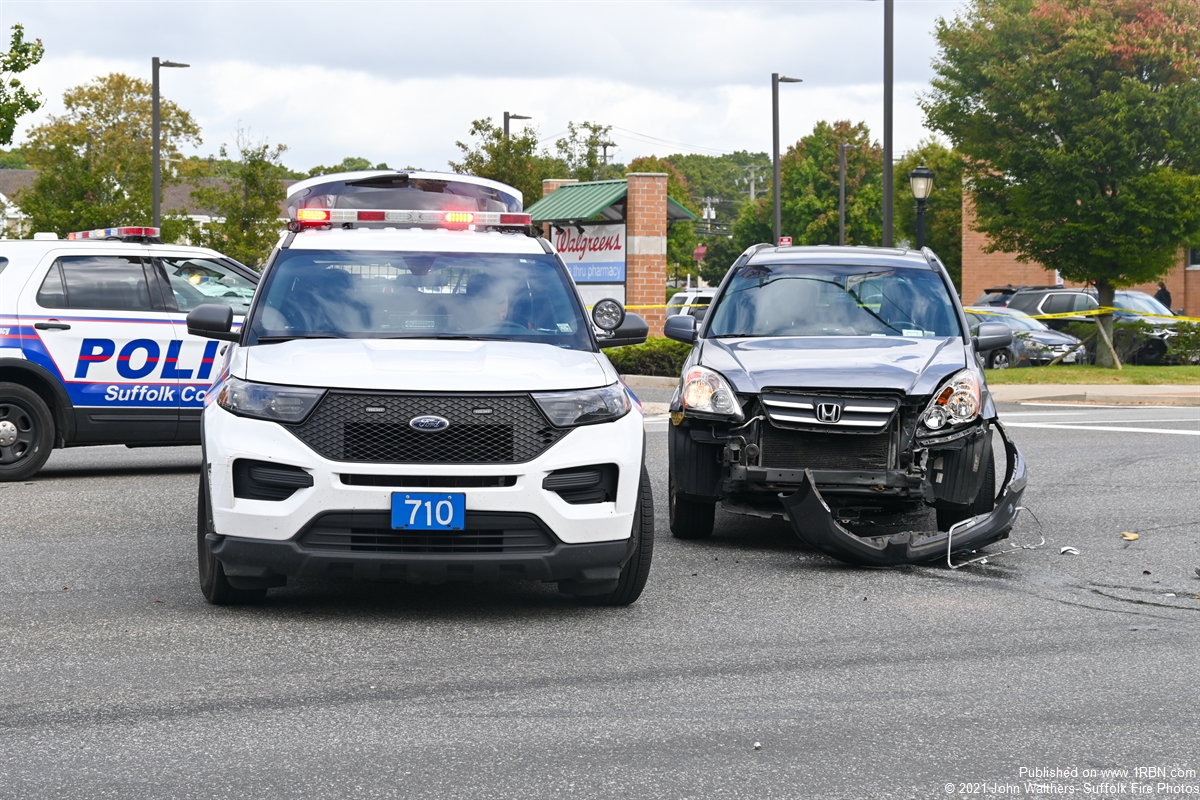 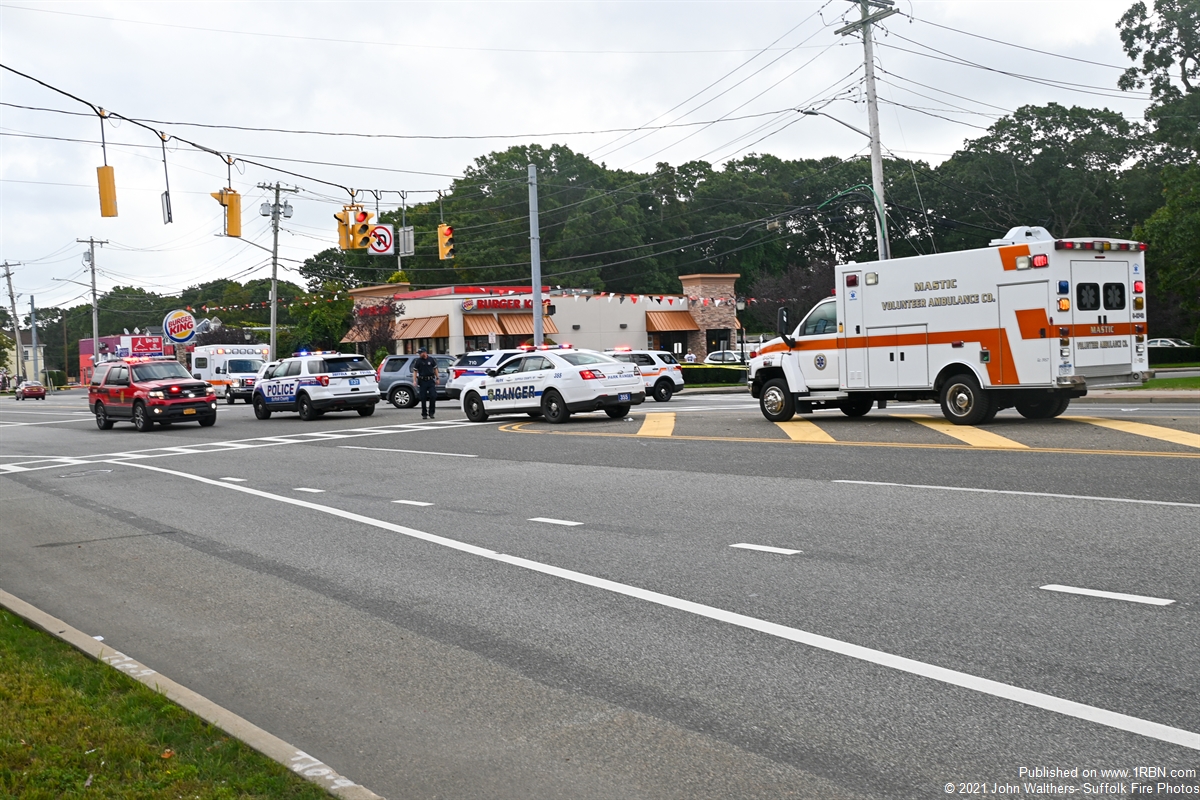 SHIRLEY, NY - On Saturday, October 9th at about 11:10 A.M., chiefs from Mastic Ambulance and Mastic FD were activated for a report of an MVA involving a motorcycle at Montauk Highway and Aletta Place. Based on additional details, the call was quickly upgraded to a general alarm for Mastic FD. Suffolk County PD also dispatched officers from the 7th precinct to the scene.

On arrival officers advised that they were going to need a medevac for the motorcyclist, with Mastic FD assisting in securing a landing zone at Applebees on Montauk Hwy. in Shirley. Assistant Chief of Mastic FD, Gene Martucci, had command of fire operations and arrived to the scene to find officers treating the rider. He immediately directed the first due engine to go to the landing zone and assist Suffolk Police with securing the parking area for the incoming helicopter. Engine 5-12-4 secured the landing zone.

Engine 5-12-1 was directed to come into the scene and assist over at the accident, which was across the road from the landing zone. Chief Martucci advised that they would need to assist with securing the scene, but that PD was most likely going to hold the scene for an investigation so they would not be able to clean up fluids or debris. Engine 1’s crew also assisted at the landing zone as needed. Fire Police 80 assisted Suffolk Police with traffic control.

The motorcyclist was treated for a serious leg injury by Mastic Ambulance crew members and the flight medic and then packaged and brought over to the helicopter for transport to Stony Brook Hospital for further treatment.

Suffolk Police kept the road closed for several hours while they investigated, and once complete, Mastic FD was called back to clean up the fluid spill.