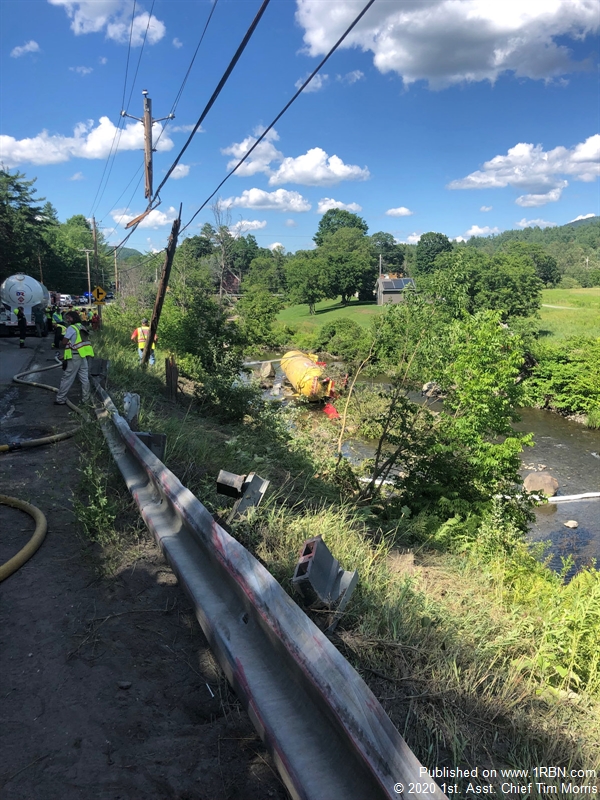 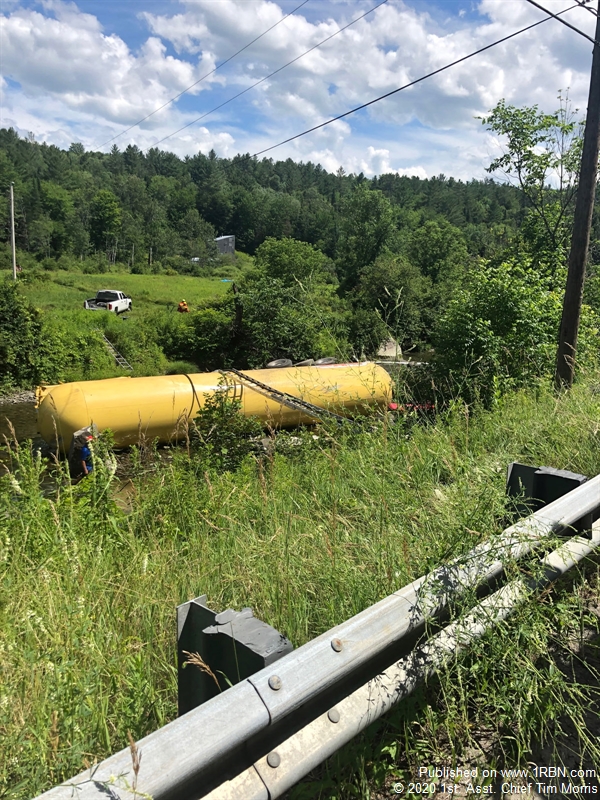 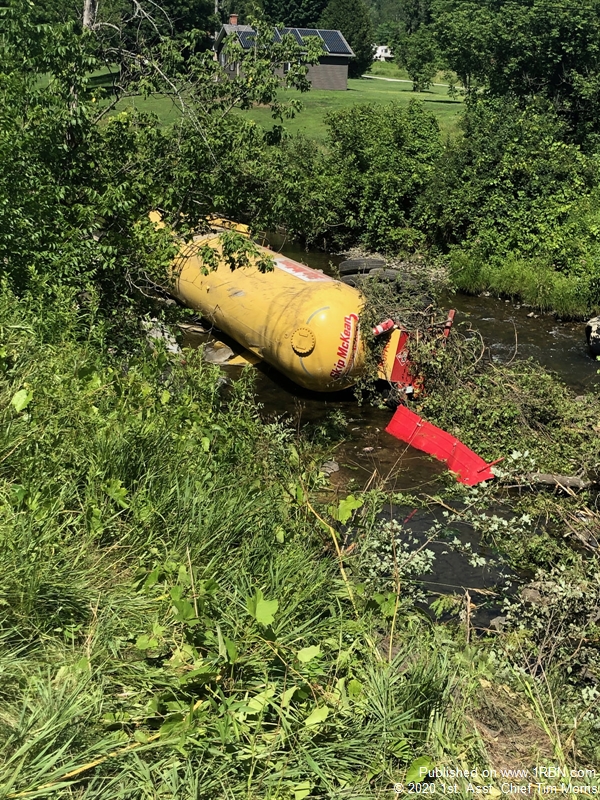 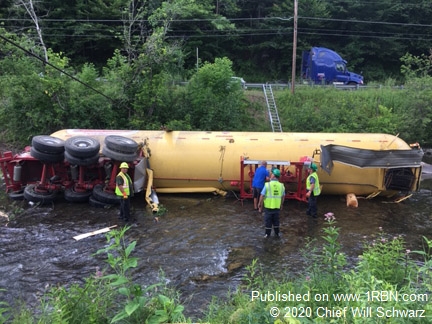 Photo by Chief Will Schwarz 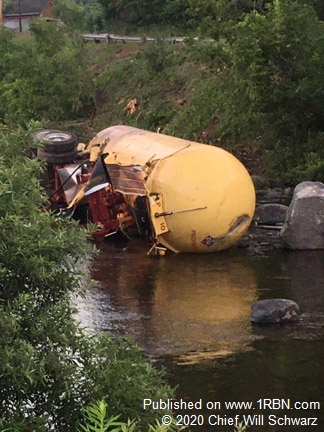 Photo by Chief Will Schwarz

Marshfield, VT - On Monday, July 20th at 7:17 A.M., alarms sounded for a TT unit rolled into the river near Onion River Rd. in Marshfield. Initial reports received indicated a propane trailer in the river, while further reports received enroute stated the driver was out of the vehicle with no injuries and that the trailer unit was not leaking.

The first units on scene at 7:23 A.M. found the driver of the truck standing in the roadway. U.S. Rt. 2 was fully blocked, the tractor was on its side resting on the center line. The driver indicated that he was hauling a full load of odorized liquid propane, approx. 12,500 gallons. Initial size up showed only a very small vapor leak from one of the pressure relief valves on the top of the tanker. This vapor leak was already icing up and diminishing in intensity. EMS crews arrived and conducted patient assessment. The driver of the TT unit suffered only minor scrapes and bruises and refused transport.

At 7:30 A.M., Marshfield Command requested assistance from the Vt. State Haz Mat Response Team and a Decon Trailer with spill equipment from Berlin Fire Dept. Command also requested additional help from Vt. AOT & Washington County Sheriffs Dept. to aid with traffic control and setting up a detour. It was obvious from the start that U.S. Rt. 2, a major east/west artery, would remain closed for most of the day. Green Mountain Power was also contacted. The power was shut down in the overhanging wires at 7:56 A.M. Vermont State Police and the DMV Investigation Team conducted the accident investigation.

By 9:15 A.M. it was determined that we had an extended duration Haz Mat incident. Heavy truck recovery specialists were contacted around 8:00 A.M. and were enroute to the scene. All residents within 500 yds. of the crash site were kept informed, however there was no mandatory evacuation notice given out. The small vapor leak was not a threat, the scene was well controlled within the first 30 minutes.

Upon arrival, Berlin Fire units deployed a set of river booms. This was a precautionary measure just to catch any fluids that leaked from either the brake systems or the rear axles of the trailer. Vt. Haz Mat Units conducted a thorough visual inspection of the trailer. Although the container was heavily damaged, it remained intact with no breaching.

Between 12:00 P.M. and 1:00 P.M., crews arrived from Dead River Co. along with a subject matter expert from the Propane Gas Association of New England (PGANE). Working closely with the Vt. Haz Mat Team, a plan was developed for the removal of product from the tank. At approximately 1:45 P.M., pumping ops began the transfer of product into another TT unit. The pumping operation successfully removed approximately 7,400 gallons of liquid propane form the trailer. Due to the position of the tank, this was the extent of the effective pumping operation. At 3:32 P.M., the decision was made to halt the pumping operation and move to a flaring operation. Rt. 2 was cleared of equipment at this time and power was restored to the electrical grid. The flaring operation continued until midnight and was successful in removing another 1,800 gallons of product from the tank.

On Tuesday morning, July 21st, crews gathered on scene to finish the job. Marshfield Vol. Fire Dept., the Dead River crew, Byron Breda from PGANE, the towing and recovery crew, GMP with traffic control, and VSP worked through the day to complete the work. By 12:45 P.M. the trailer was up righted in the riverbed, enabling pumping ops to resume product recovery. At 5:20 P.M., Marshfield command advised that all product had been removed from the trailer and recovery of the trailer from the river was commencing. By 5:59 P.M. the trailer was out of the river and was being readied for transport on a large flat bed trailer. At 7:47 P.M., Marshfield command advised that all fire units were cleared from the scene, returning to quarters.