Orange Firefighters Honor Deceased Members With Service; Two additional members added to the list of firefighters who have died as National Fallen Firefighter Weekend is marked 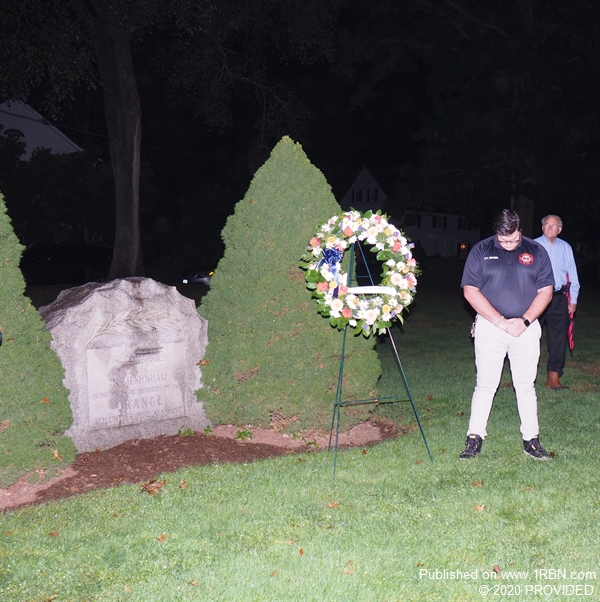 Photo by PROVIDEDFirefighter Nicholas Brown bows his head as he stands next to the memorial wreath as Orange firefighters celebrate members who have died.

Fire Chief Vaughan Dumas noted the difference in the timing and circumstances of this year’s service as he addressed members. Night was falling and members stood quietly with their heads bowed, their faces masked and with some distance between members.

“Had it not been for their contributions,” Dumas said of past members, “we wouldn’t have the foundation we have today.”

Dumas noted that the service couldn’t be held on Memorial Day because of the coronavirus, but that Tuesday was an appropriate day because it came in the middle of National Fallen Firefighters Weekend, which runs from Sept. 27 through Oct. 4. In addition to the Orange ceremony, Vaughan thanked firefighters for participating in a state ceremony that added Fire Marshal Tim Smith to a memorial list at the Connecticut Fire Academy in Windsor Locks. Smith died in the line of duty in January.

“We can never repay the sacrifices of these courageous firefighters,” he said. “We only acknowledge that they gave all for us. Help us to go forward today having received from these short moments of prayer and meditation a small measure of personal aspiration to be like them in daily small ways.”

Dumas noted that in addition to Smith, Elfo Pol’s name was being added to the list of firefighters being remembered. Pol passed away in June.

After Vaughan’s comments, he and Deputy Fire Chief Charles Sherwood read the names of the firefighters who had passed away. Those names were: