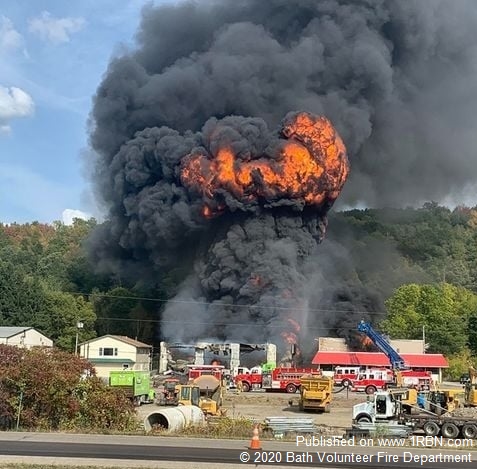 Photo by Bath Volunteer Fire DepartmentA fireball and heavy smoke fill the sky when one of several barrels of oil exploded from the intense heat. 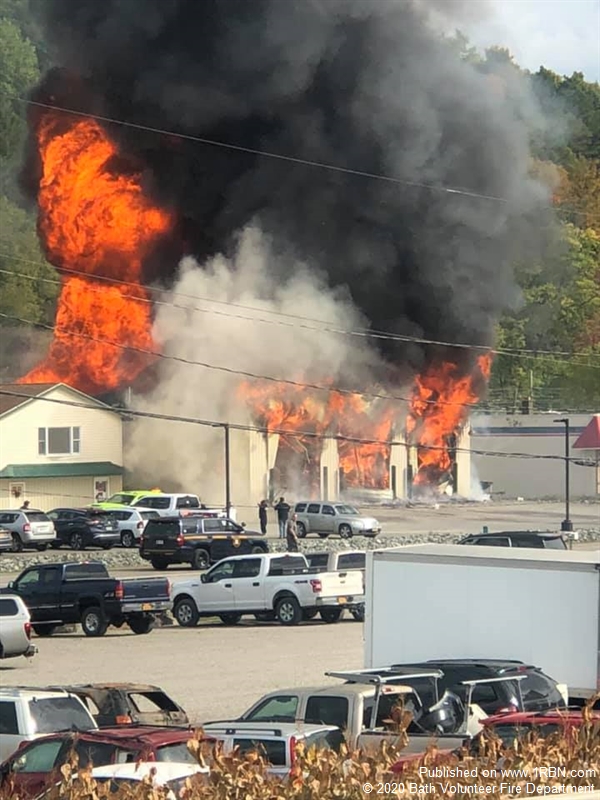 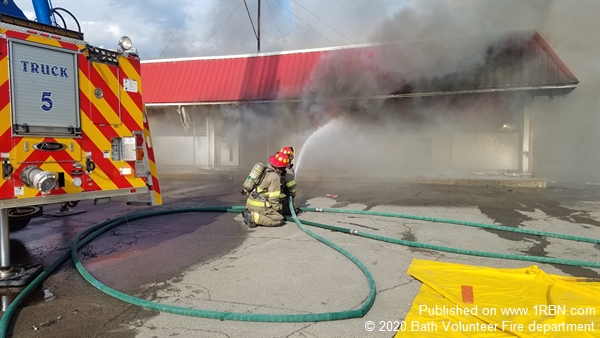 Bath, NY - On Thursday, September 24th at 2:50 P.M., the Bath Volunteer Fire Department was dispatched for a working structure fire at T&R Environmental Services Haz Mat building, located next door to T&R Towing on Route 415 North of the Village of Bath.

Large plumes of heavy black smoke could be seen for miles. Assistant Chief Sean Walruth was first on scene and immediately started calling for mutual aid tankers for water and manpower. In all, 16 departments were called to aid in our effort to bring the massive fire under control.

The building housed the team's response equipment and trailers, as well as large tanks of used oil and several barrels of oil, hydraulic oil and other maintenance fluids. T&R Environmental Specialist is a division of T&R Towing of Bath which is next door, but was undamaged in the blaze.

Originally, T&R Environmental Response Haz Mat building was fully involved in intense flame and heavy black smoke. There were several large fireballs that went high into the sky from the barrels of oil that were exploding. Crews were set up to try to protect the T&R office and dispatch center and the Fred Roberts Auto Parts buildings located on each side of the Haz Mat building. The dispatch building was saved, however the intense heat got into the Fred Roberts Auto building, totally involving that as well due to the heavy load of oil, paint, paint thinner and other flammable materials inside the auto parts store.

It took roughly four hours to bring the fire under control and a few hours more to mop up and extinguish the fire completely. By the time Bath units returned to quarters and got the equipment back in ready condition for calls it was approximately 11:30 P.M. The cause of the fire is currently under investigation.

Bath Volunteer Ambulance was on scene in case of injuries and to monitor firefighters through the duration of the fire. Law enforcement agencies went door to door to local homes in the immediate area to evacuate them to safety.

Brian Polmanteer, who is the owner of T&R, wants to extend his gratitude to all the departments and everyone that came to help in his time of need. He is just grateful none of his employees or any of the firefighters were seriously hurt during the fire. One of the employees was treated at the scene for minor burns.

The Bath Volunteer Fire Department is extremely grateful to all the mutual aid departments that came to help battle this inferno, and the department's ladies auxiliary, The Fireflies, for making sandwiches and bringing drinks to the scene.

We also would like to thank the following businesses who donated food and water to all of the firefighters: Sav-A-Lot, Rico’s Pizza, Angry Oven Pizza, Pizza D, Big D’s & Chef T’s, Pilot Truck Stop, Southern Tier Provisions, Maybe Baby Burgers, and Tractor Supply. A special thanks also to Mary Seager, a neighbor of the fire station, who came and helped make sandwiches.