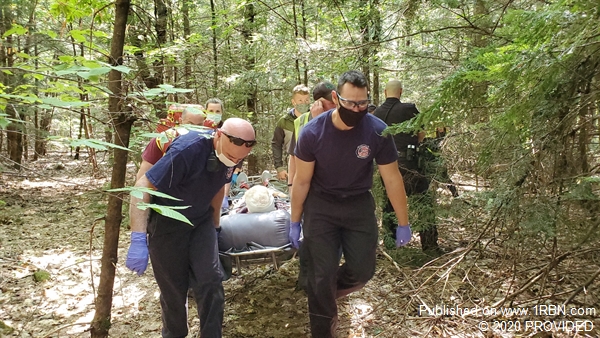 Involved in the accident was a husband and wife from Marlborough, NH. They were riding tandem when the ATV rolled onto its side and on top of the wife, causing the 82-year-old female to receive a severe head injury. After paramedics stabilized the patient, she was carried out of the woods and transported to Concord Hospital.

Fire Chief Robert Vezina would like to thank all who assisted and aided in the successful mitigation of the two-hour incident, most significantly Dunbarton Fire Department, Weare Police Department, and Goffstown Fire Dispatch.

The Hopkinton-Everett multi-use Trail System is an expansive network of multi-use trails beginning at the parking area off Winslow and Ray Roads in Dunbarton, NH. Six distinct loops wind outwards towards Stark Pond and Everett Lake, passing over hills and crossing streams and rivers at several points. In addition to the 24 miles of cut trail, numerous dirt and woods roads offer trail users plenty of territory to explore.