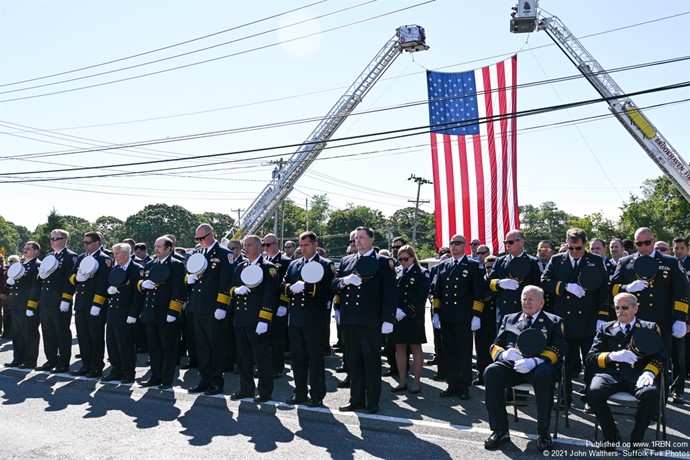 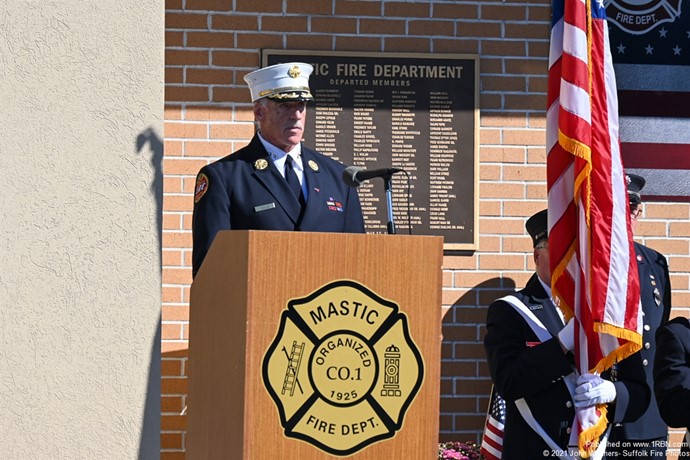 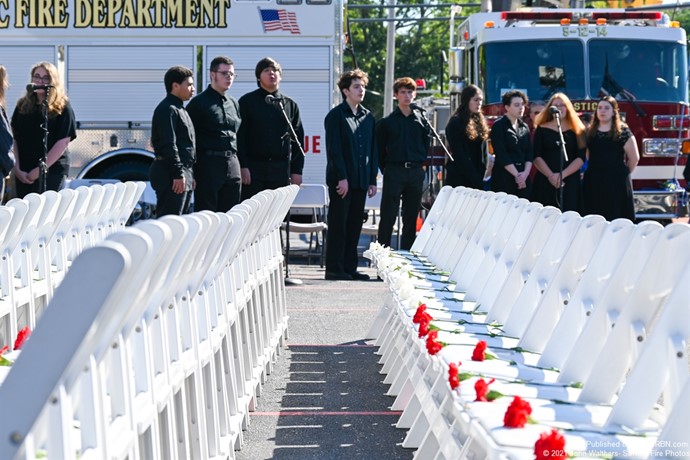 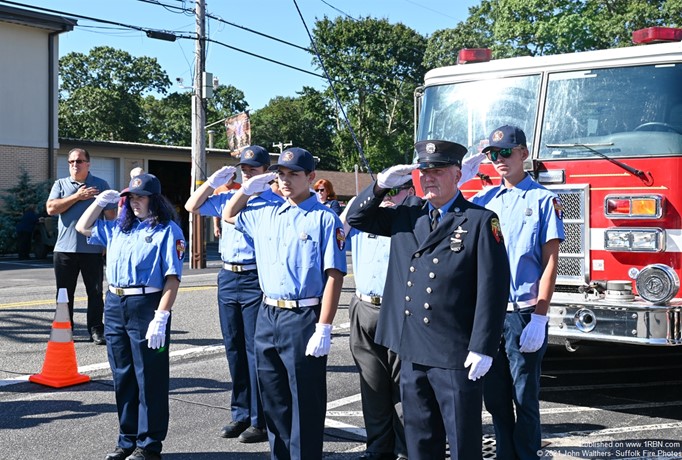 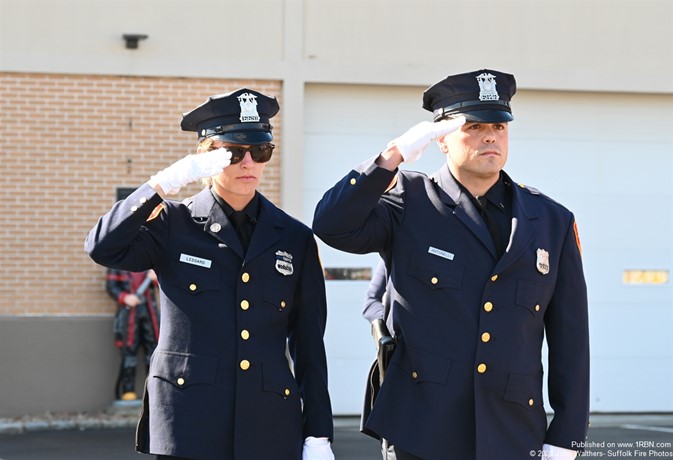 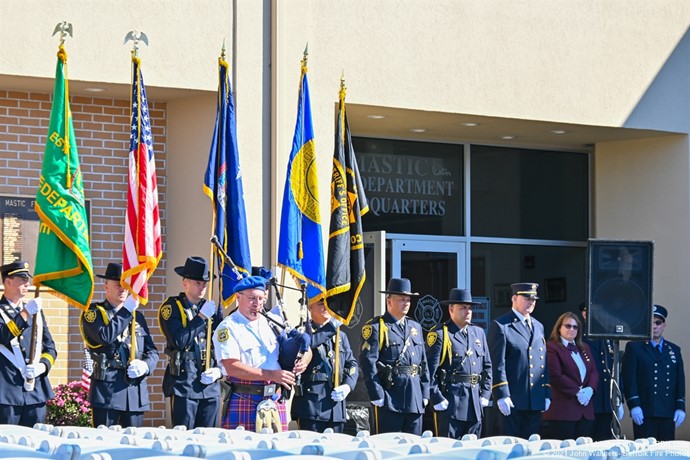 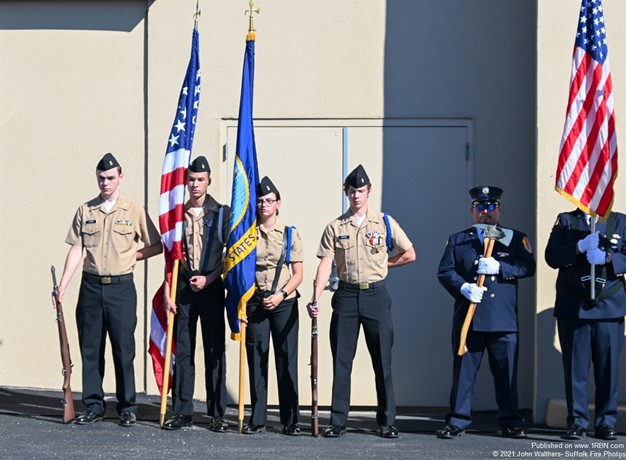 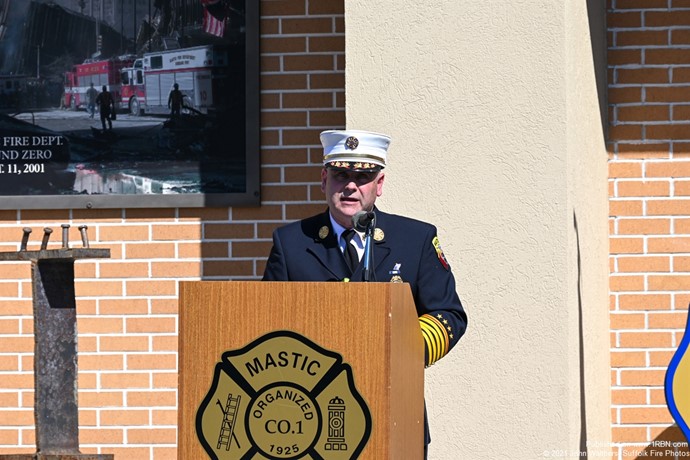 Mastic N.Y. - On the morning of September 11th, the Mastic FD under the direction of Chief of Department Rudy Sunderman held their ceremony for the 20th anniversary of 9/11. In attendance were members of the Mastic FD along with crews from neighboring departments in Mastic Beach , Brookhaven , Manorville, East Moriches, Mastic Ambulance , Shirley Ambulance, Mastic Beach Ambulance, Suffolk Police , Suffolk Sheriffs and more. Also invited were dignitaries and numerous other groups such as Boy and Girl Scouts, William Floyd HS NJROTC, VFW groups, and William Floyds Band and Chorus members.

The ceremony included a special white chair memorial which represented 343 FDNY members who perished. The chairs had carnations taped to them to symbolize police, Fire , EMS workers, Military and civilians who were losts. Chief of Department Rudy Sunderman started off the morning by welcoming everyone as well as having President Dan Hasse lead the pledge of allegiance. During the Ceremony firefighters and EMS workers and uniformed police officers lined up in several rows behind the chairs facing the stage. At times they would salute during patriotic numbers that were performed by the William Floyd Band and Chorus. They also removed their covers during prayers. Recounts of that morning were read by various department members and other guests as the bell was rang in their memory.
Members the FDNY Command were also present for this ceremony including Retired 3 Start Chief of Special Operations William Seelig. Chief Sunderman Invited Chief Seelig to the podium where he made brief remarks to honor the 343 FDNY members as well as all of the Police, Emergency Responder, Military and Civilian lives loss. In addition, he spoke of the loss of FDNY Lt Kevin Smith of hazmat 1 which was one of the units Chief Seelig oversaw. Smith was also a member of the Mastic Fire Department and Mastic ambulance company. Several other brief speeches were given throughout the reminder of the event. The roughly 40 minute servicec concluded with closing remarks By Chief Sunderman.