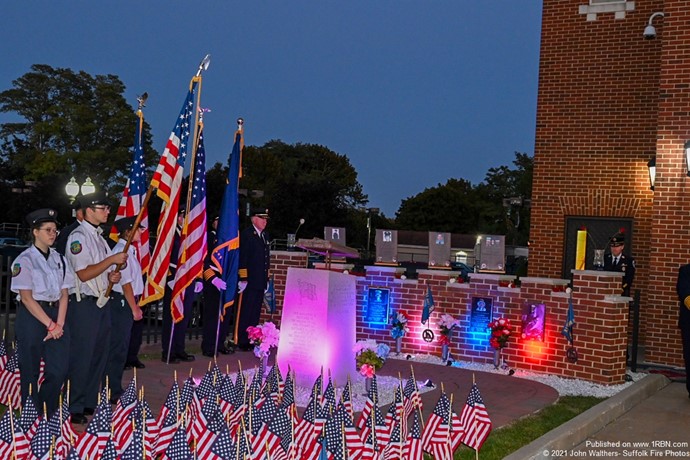 Photo by John Walthers- Suffolk Fire PhotosThe Colors sit posted next to West Sayville FD 9/11 memorial wall site which was all light up after its unveiling. A field of flags was also placed in honor of those lost on that day. 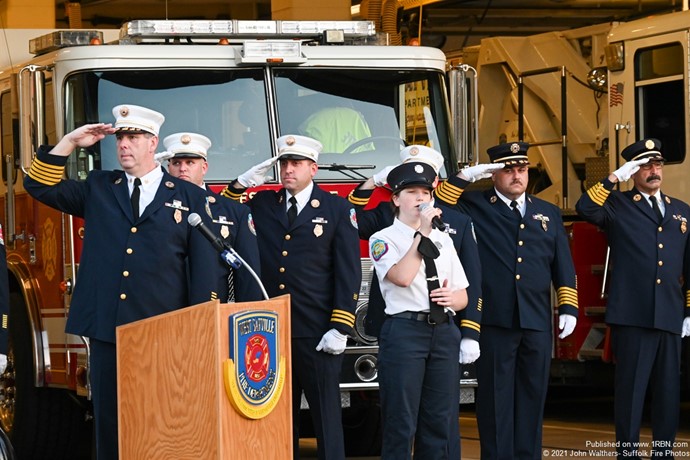 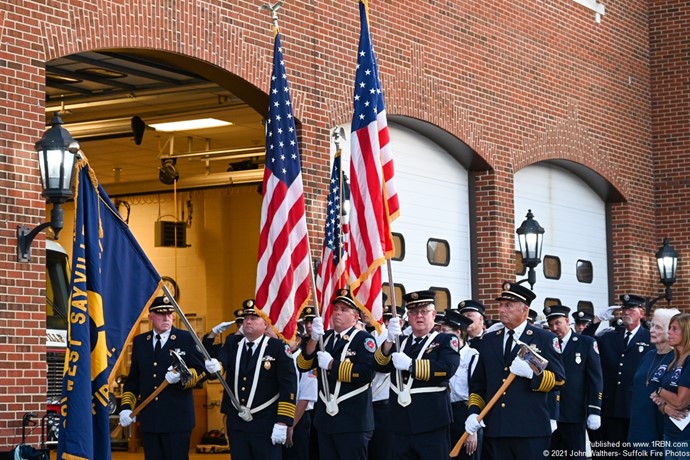 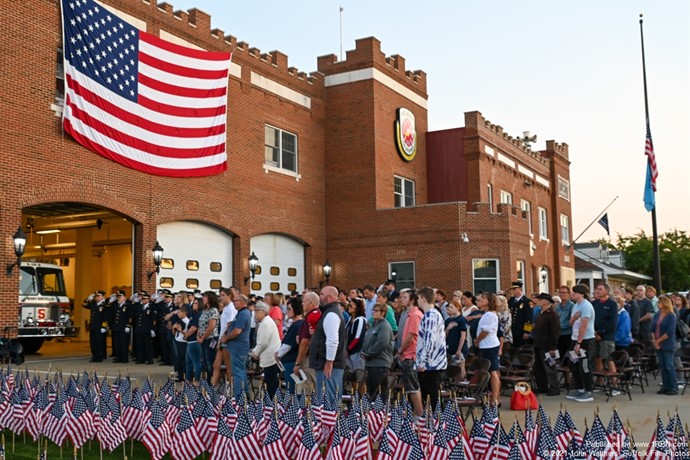 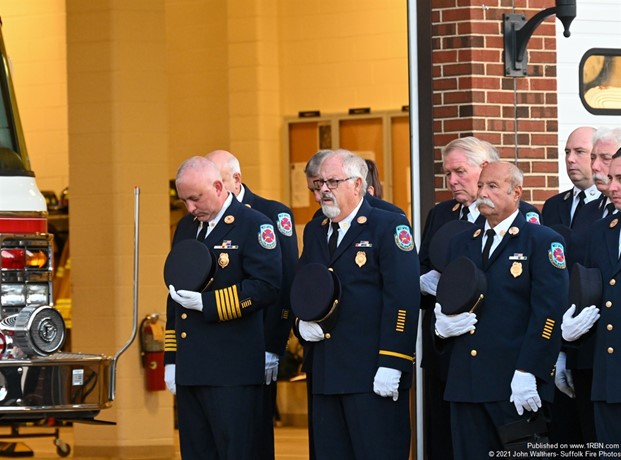 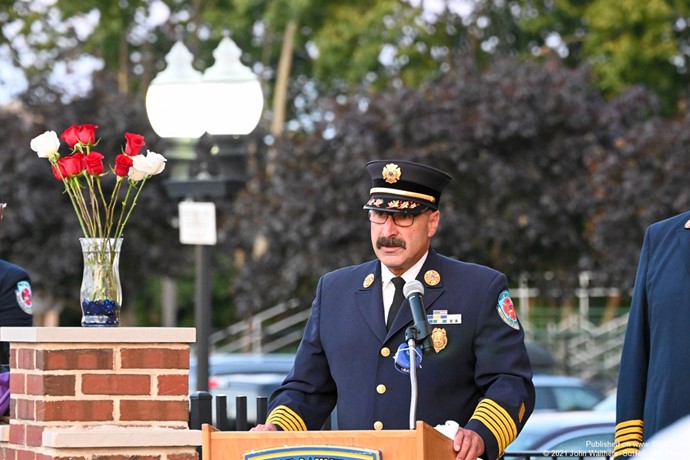 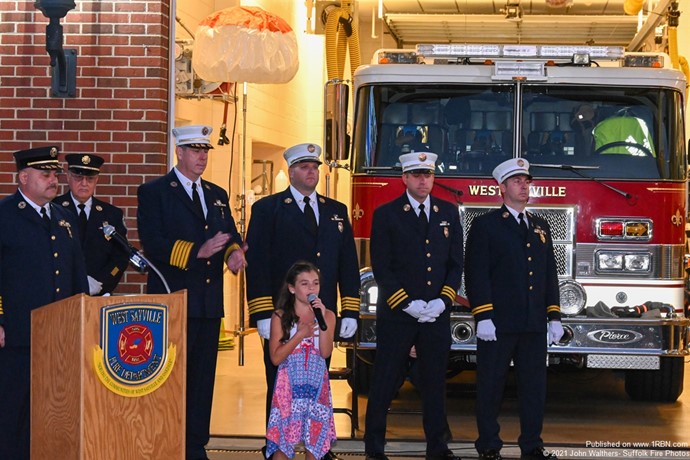 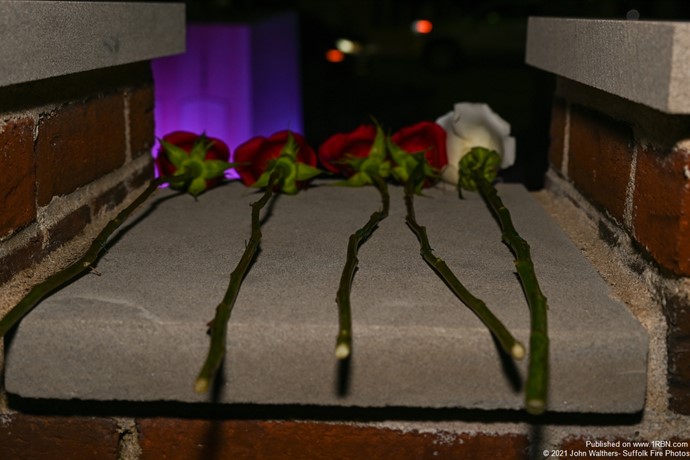 West Sayville N.Y. = On the night of September 10th the West Sayville FD under the direction of Chief of Department Jeffrey Houghtalen held their ceremony for the 20th anniversary remembrance of 9/11. The evening opening with some remarks from the chief, followed by the posting of the colors. The National Anthem was sang by West Sayville FD Junior Brooklyn Diwby. The Chaplin of the Department George Munkenbeck gave his invocation which was then following by a recount of that fateful morning of September 11, 2001 by Ex- Chief Joseph Schroeder.

Once the recount of the morning was completed Chief of Department Jeffrey Houghtalen began that calling of the Roll of Honor for those members of the department and the community that were lost. At the center there were also several monuments that were unveiled some of these monuments were either new or recently had work done on them while others were rededicated on this somber anniversary eve. The first plaque to be unveiled was that of Ex-Chief Harry D’Onofrio . Ex-Chief D’Onofrio was a 43 year member of the West Sayville FD and also an NYPD Detective assigned to the Emergency Services Unit ( ESU). D’Onofrio though off that day from his job at the NYPD responded to work once he heard the news of the attacks on the World Trade Center. He also put his department on standby and worked to check in with the department members who were members of the Police and Fire Departments of NYC. Soon after his department would be sent on the mutual aid to the city to assist in Queens and at Ground Zero. D’Onofrio spent time assisting at ground zero and other locations related to the attacks. As a result he Sadly passed away of 9/11 illness on April 14th 2021. A new Plaque was added on the memorial in his honor his Sons Patrick and Brian who are active assistant chiefs in the department and other members of the family were invited up to view the unveiling and place roses in remembrance.

Additional Plaques were also unveiled and rededicated for Glen Pettit. Glenn Was a member of West Sayville FD for 4 years and prior to that was a volunteer at the Lakeland FD where he was a junior as well. Pettit was Police officer with the NYPD and member of the photo unit as well as a videographer for news organizations on Long Island Including News 12 . During the Attacks he entered the lower level of the Towers with his camera where he worked to assist as well as document the events for the NYPD. He would later make the Ultimate Sacrifice . A plaque with his name was re-dedicated and his family was invited to see it after the reveal and place flowers as well.

Additional Plaques unveiled were for Firefighter Patrick J O’Keefe of the FDNY and also Firefighter Charles Jones III who was a 33 yr member of West Sayville FD and a firefighter with Ladder 165 in the FDNY. Jones also responded to the attacks and would later pass as a result in 2013. Prior to retiring the colors a rendition of God Bless America was sung by young Ava Echezuria . The closing benediction was provided by the Chaplin Munkenbeck. After the service the department invited those in attendance to stick around and a video montage put together by members was played behind HQ. The West Sayville fire department showed that despite 20 years going by the will never forget those lost or who are suffering from the effects of that day still .