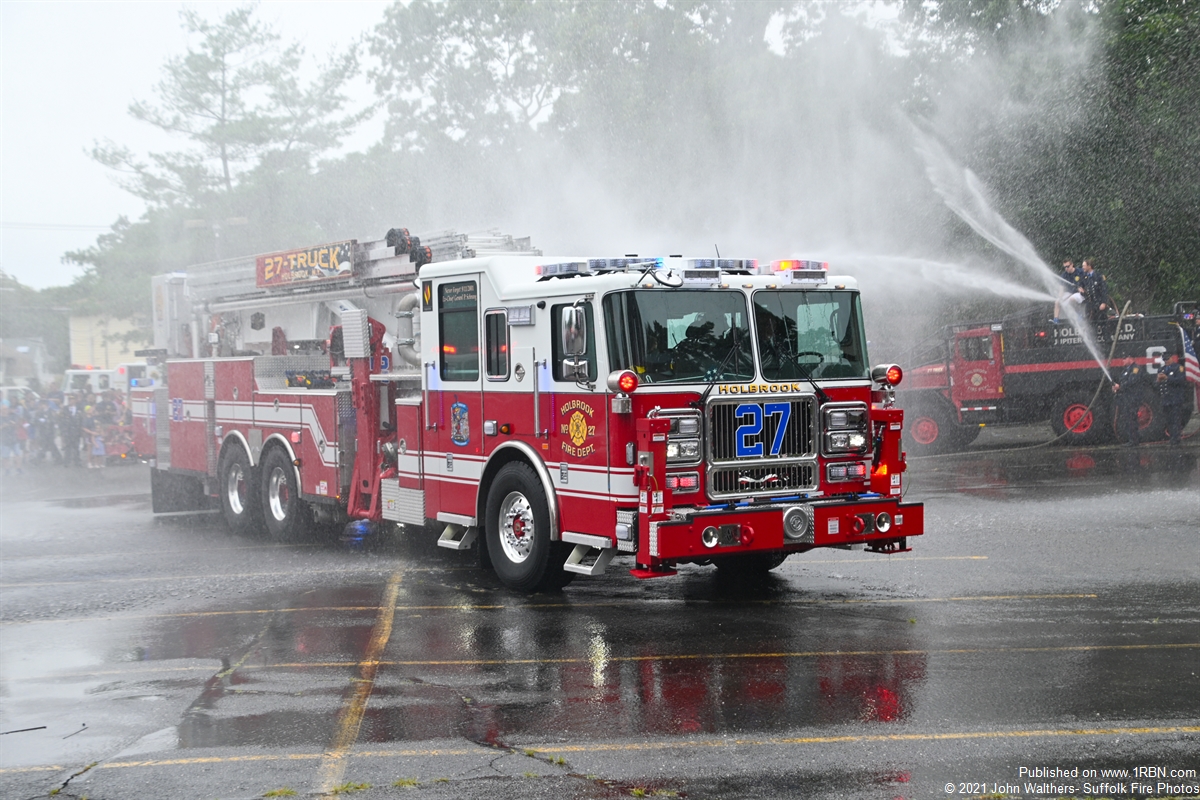 Photo by John Walthers- Suffolk Fire PhotosHolbrook FD Jupiter Truck 27 (3-15-27) a 2021 Seagrave Marauder 95ft Arialscope gets wet down to welcome it to the fleet. 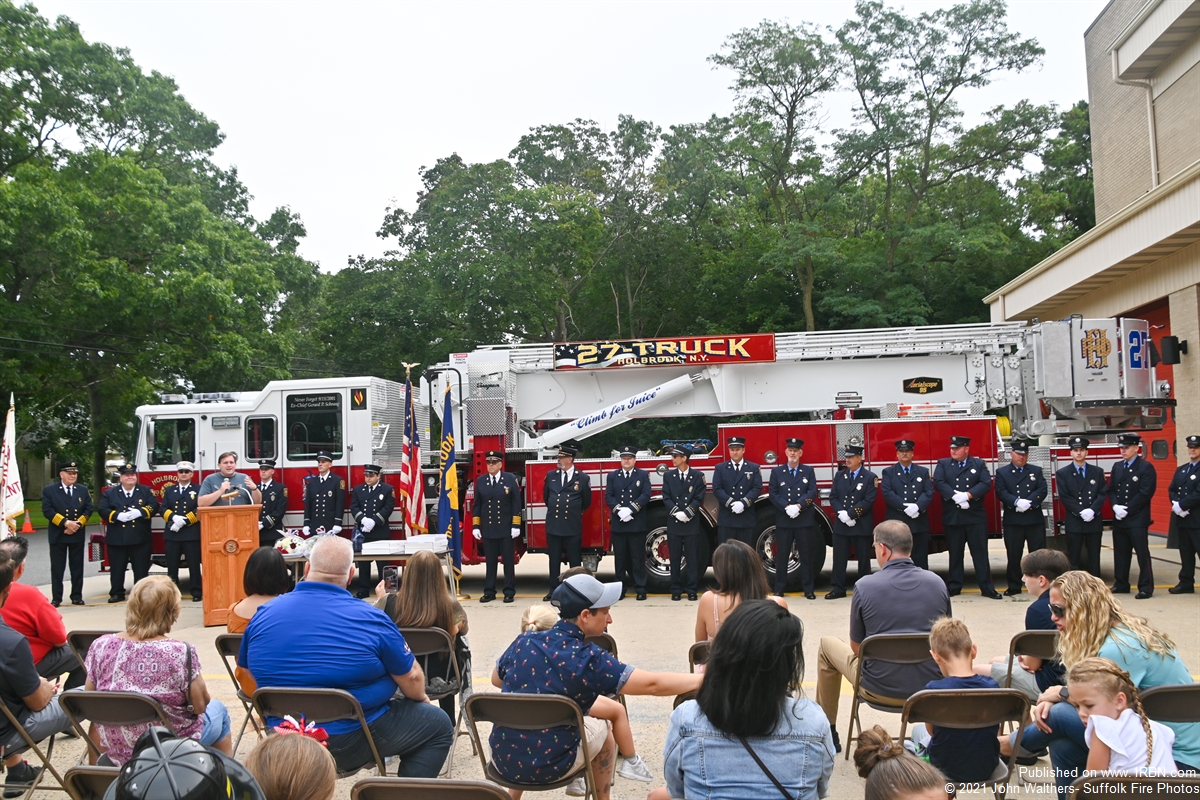 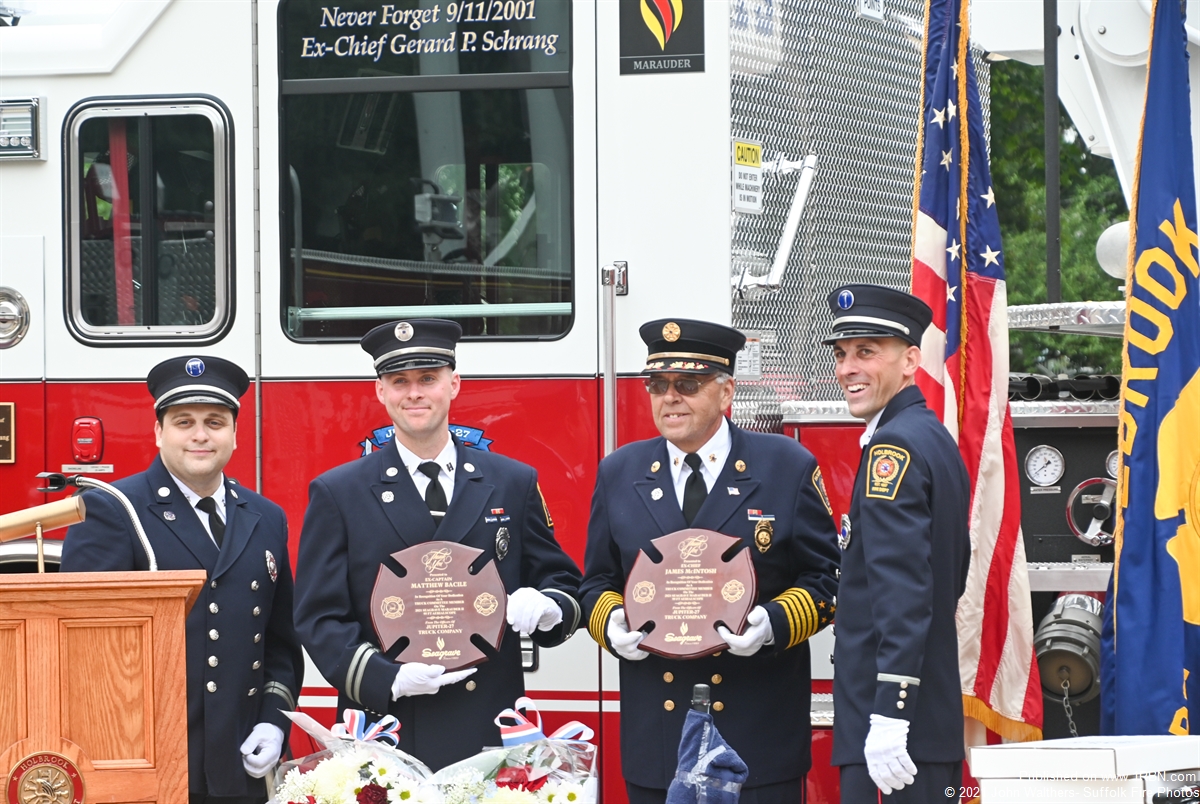 Photo by John Walthers- Suffolk Fire PhotosAwards are presented to key members who assisted on the project. 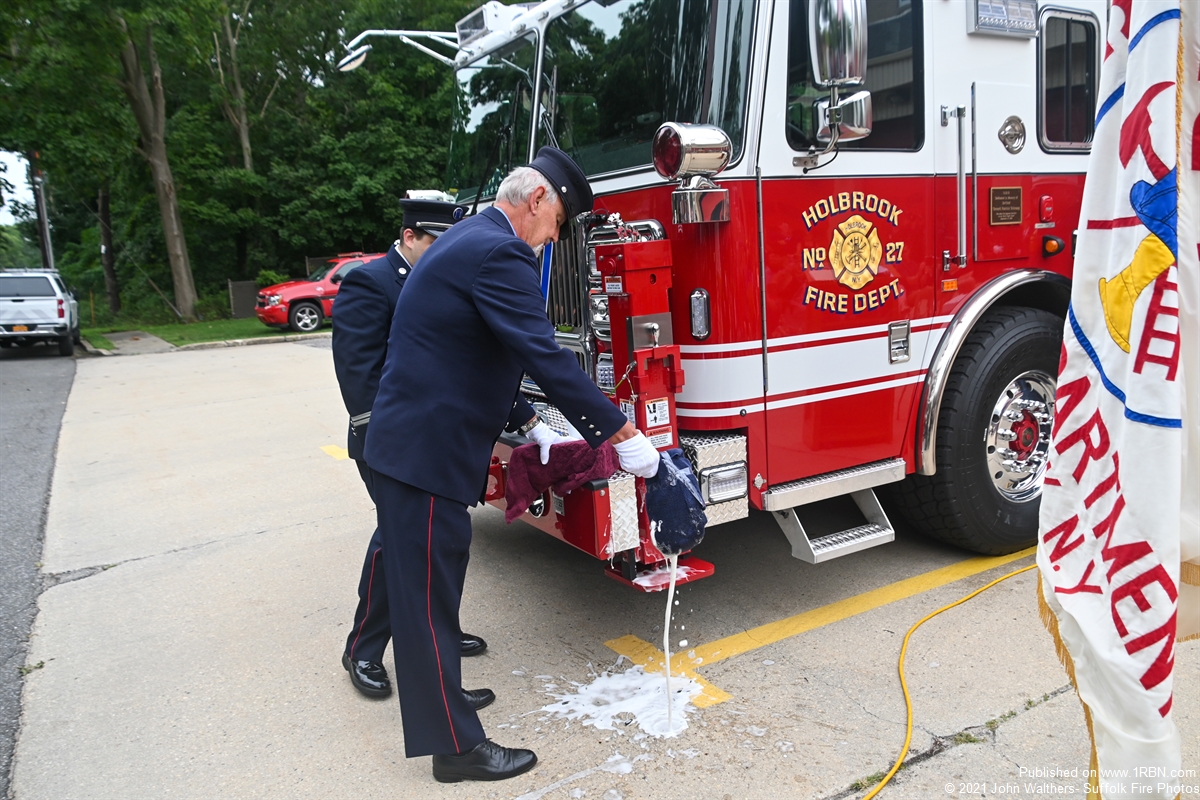 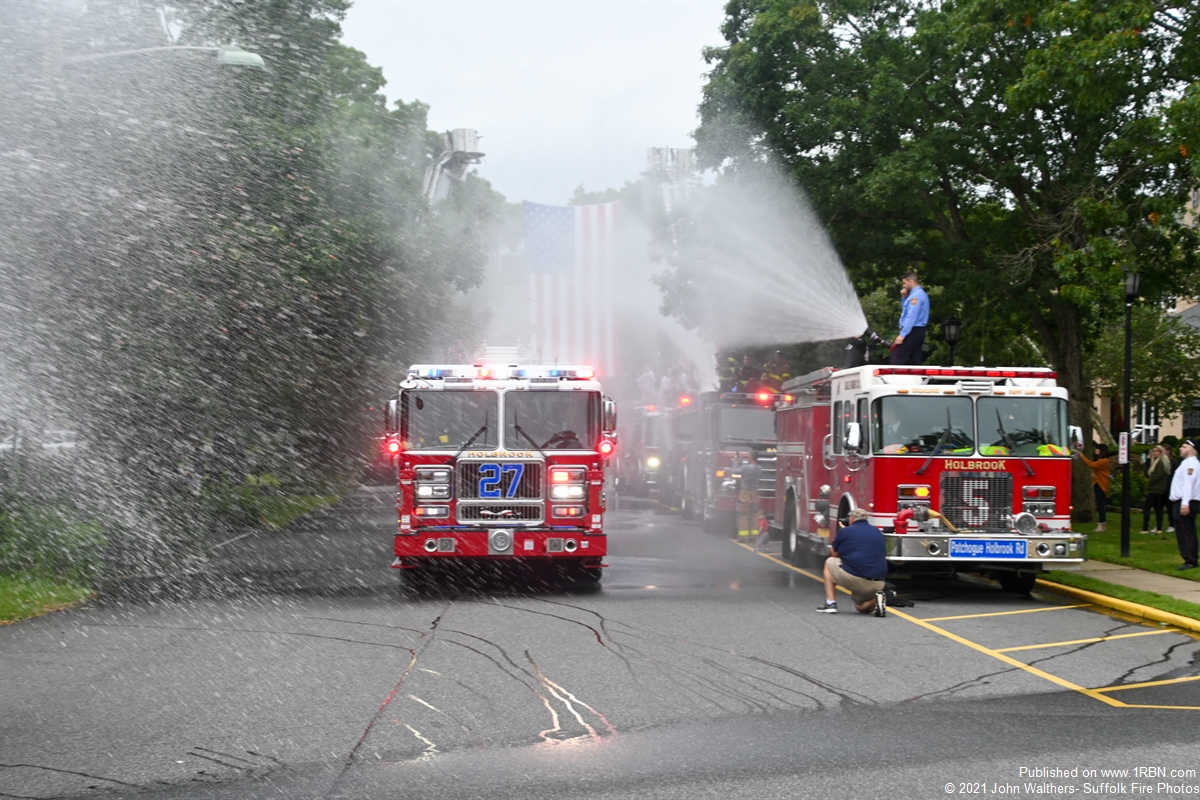 Photo by John Walthers- Suffolk Fire PhotosJupiter Truck 27 gets a ceremonial bath from other apparatus at its recent wetdown. 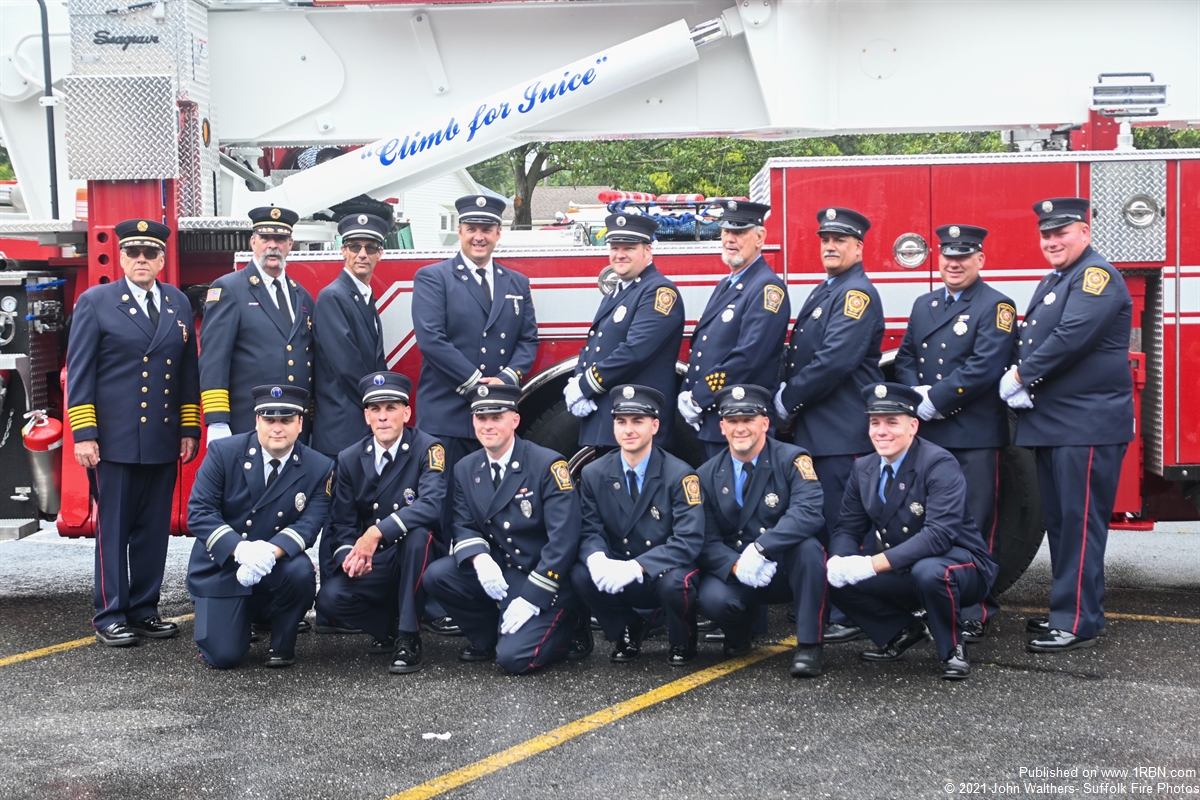 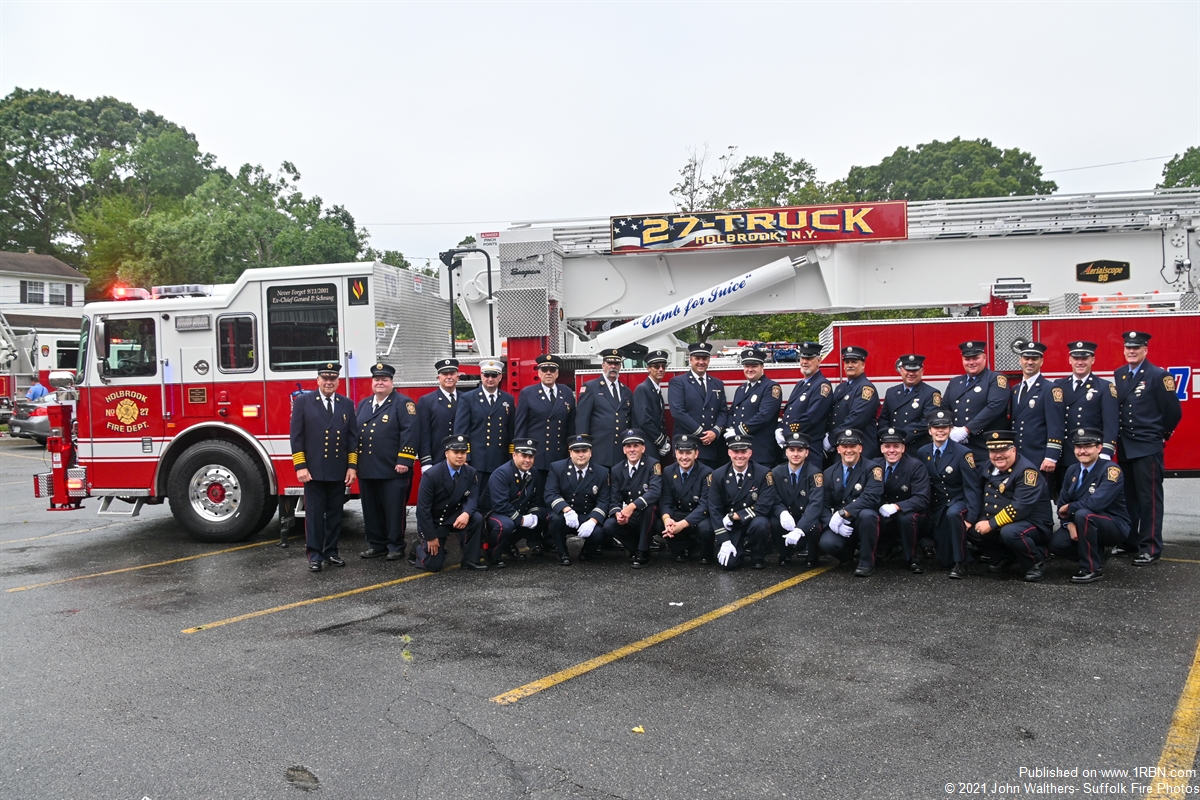 Photo by John Walthers- Suffolk Fire PhotosMembers of Holbrook FD Stop in front of Jupiter Truck 27 for a photo after the blessing of the rig. 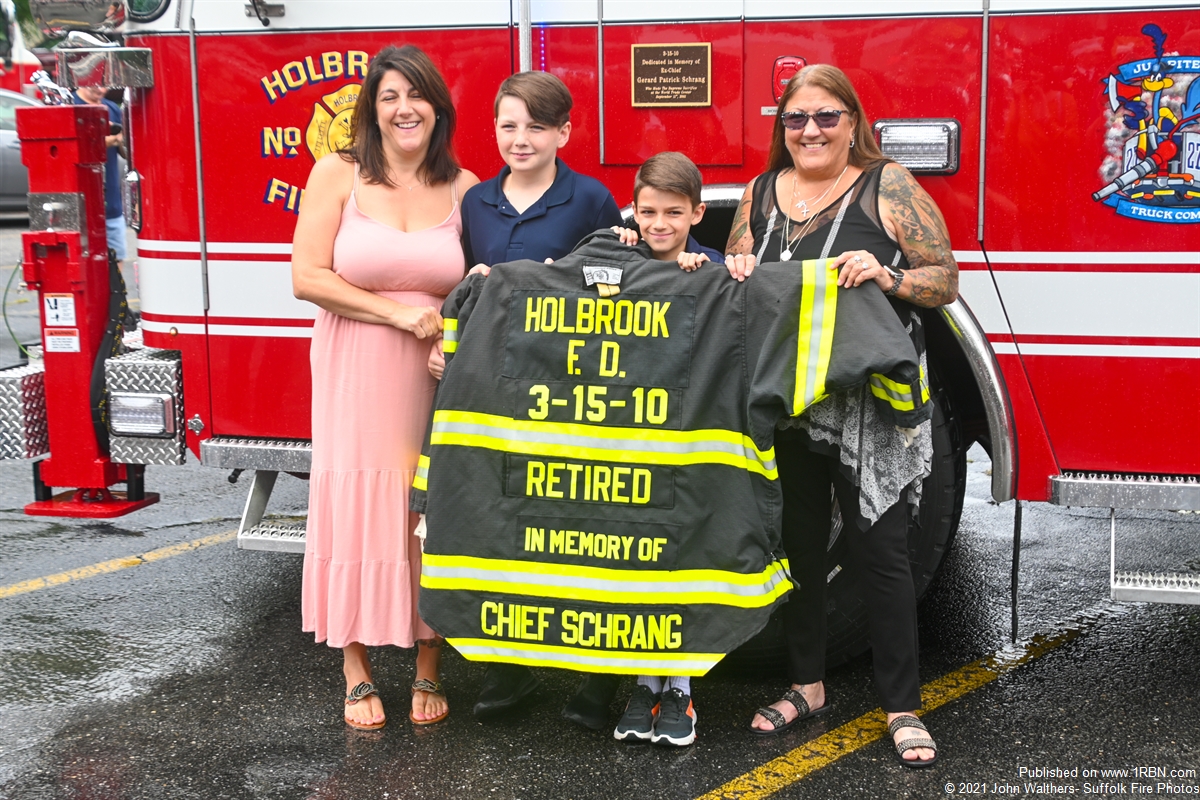 Photo by John Walthers- Suffolk Fire PhotosMembers of the Schrang Family hold up the turn out coat with Ex Chief Schrang's Name and the ID 3-15-10 that will be hung on the wall of the apparatus bay.

Holbrook N.Y. – On Sunday August 29th the Holbrook Fire Department held a wet-down celebration for their new ladder truck. The truck identified as 3-15-27 aka Jupiter truck 27 is a 2021 Seagrave Marauder 95ft Arialscope. 27 truck was officially delivered earlier in the year in May however the department held off on the christening and wet-down until large gatherings were allowed officially. The truck replaced the former Jupiter truck 10 (3-15-10).

The ceremony was attended by local fire departments, departments from other parts of Suffolk that members and officers of Jupiter truck used to be in , local politicians , photographers and dignitaries. Jupiter truck 27 is dedicated in memory of ExChief Gerard P. Schrang who in addition to being a member of Jupiter truck company at Holbrook FD was also a member of the FDNY. Schrang perished on 9/11. At the ceremony it was announced that the truck companies previous identifier 3-15-10 was officially retired. To commemorate this a turnout jack with Schrang’s name and the identifier 3-15-10 with the retired status was taken out of the truck and presented to the department for use in the truck bay of HQ . Ex-Chief Shrang’s family was present and called up to the front for this special moment.