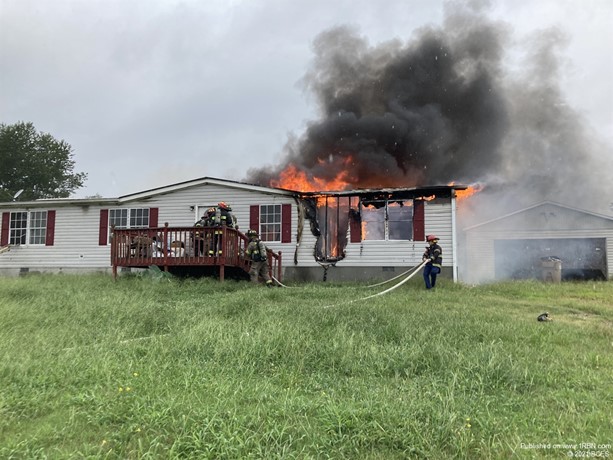 Crews and apparatus from Stations 3, 4, 5, and 7 responded. Initial arriving crews were told by neighbors that they weren’t sure if anyone was home. Heavy fire and smoke was seen coming from the front right corner of the manufactured home. A crew made a rapid entry into the home to conduct a search for victims. The home was found to be empty. A dog was found alive on the back porch and left in the care of animal control officers. An interior attack on the fire was begun and the initial bulk of the fire was knocked back. Crews battling the fire did have to contend with strong winds that were moving thru as part of the tropical storm. These winds fed the fire, but firefighters were able to extinguish the fire after about 20 minutes. The heavy rain accompanying the storm added to the challenge as a long dirt driveway made apparatus placement difficult and drivers had to be careful not to get stuck in mud. Heavy traffic on Loganville Hwy had to be directed around 700’ of large diameter hose that was running from a hydrant to the fire engine fighting the fire. The Barrow County Sheriff’s Deputies assisted with traffic control.

BCES Investigators were on scene yesterday afternoon investigating the cause of the fire, and it is still under investigation.

“The weather and difficult access to the home presented challenges, but BCES crews were able to contain the fire to the room of origin and a surrounding kitchen area. The entire left side of the structure was saved, but did receive smoke and water damage” said Lt. Steve Rose.