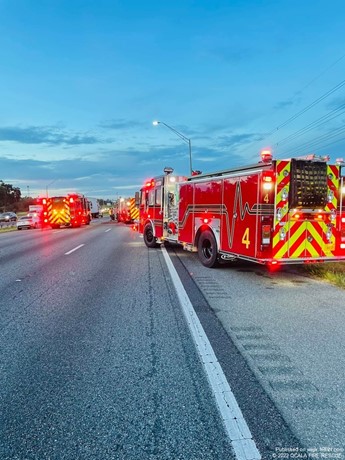 Units arrived to find a semi-truck transporting cooking oil, with its trailer fully engulfed in flames. The truck's cab had been detached and separated from the trailer.

Tower 1 crews established a safe zone with their vehicle, blocking traffic adjacent to the scene, while Engine 1, Engine 4, and Rescue 1 began fighting the fire.

Engine 4 was reassigned, along with Engine 6, to supply Engine 1 with water.

While the scene was active, two SB lanes were blocked. Traffic onto I-75 SB, from State Road 40, was diverted by Ocala Police officers.

The state warning point was notified.