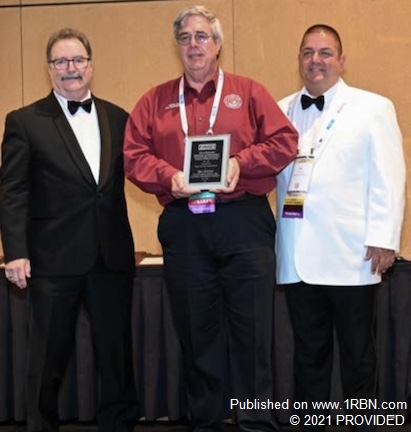 Palm Harbor Fire Rescue would like to congratulate Fire Commissioner, James Angle on his achievement of the Gale English Lifetime Achievement Award presented by the Florida Association of Special Districts (FASD). The FASD is a collective voice for special purpose government agencies. They strive to unify and strengthen special purpose government through education, the exchange of ideas and active involvement in the legislative process. The Gale English Lifetime Achievement Award is the highest award bestowed upon by the association. The recipient is selected by the awards committee and the honoree is a member who has sacrificed an extraordinary and exemplary amount of his or her time in assistance to the FASD over several years. The award was named after former South Indian River Water Control District General Manager, Gale English who in 2011, was posthumously honored with this award for his long-standing commitment and dedicated service to FASD. From that point forward, it was to be known as the Gale English Lifetime Achievement Award. “I was honored, grateful and humbled by this award, said Angle. I stand proudly with past recipients that have also given so much to the association. Saying thank you does not seem to be enough…”. Congratulations Commissioner Angle, your commitment and character exemplify the strength and compassion you have for leading us and this award was more than well deserved.