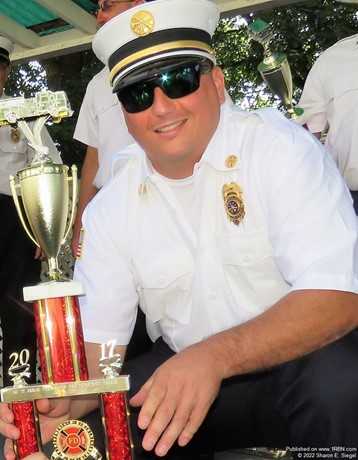 Photo by Sharon E. SiegelPort Jervis Fire Department Past Chief Dominic Cicalese led his department as chief until the end of 2021. He was honored as a Parade Grand Marshal in July of 2022. 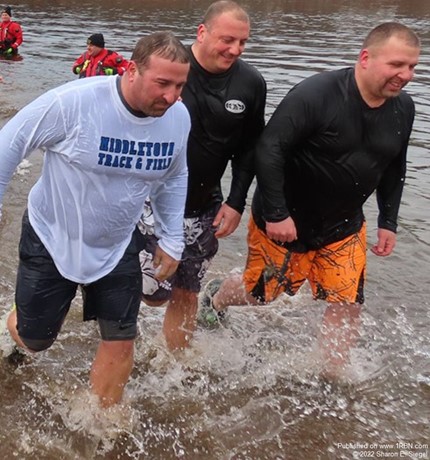 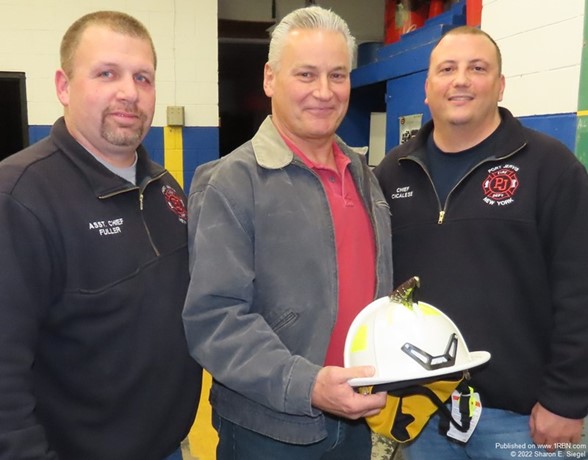 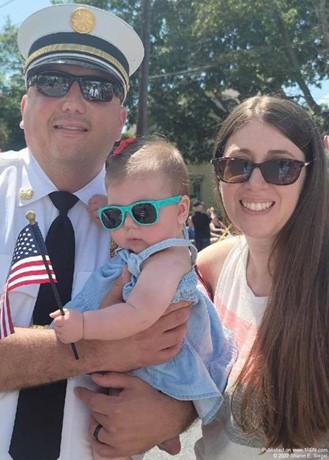 Photo by Sharon E. SiegelPort Jervis Fire Department Past Chief Dominic Cicalese is pictured with his daughter and wife Carol. 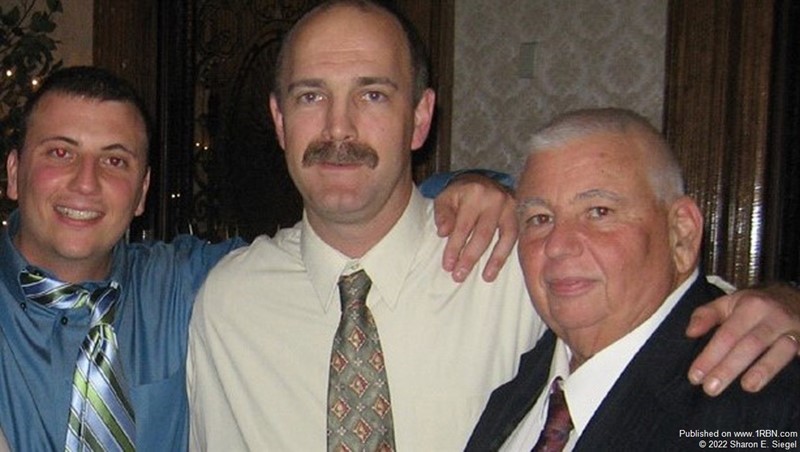 Photo by Sharon E. SiegelPort Jervis Fire Department Past Chief Dominic Cicalese (pictured in his earlier years as a firefighter) is pictured with fellow Past Chiefs Jeff Rhoades and the late Michael Cicalese (Dominic's dad). 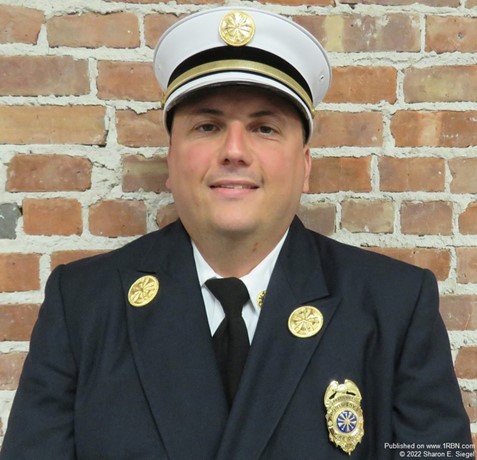 Photo by Sharon E. SiegelPort Jervis Fire Department Past Chief Dominic Cicalese (at left) during one of his many emergency responses in his 25-years of service as a PJFD volunteer fireman/chief. 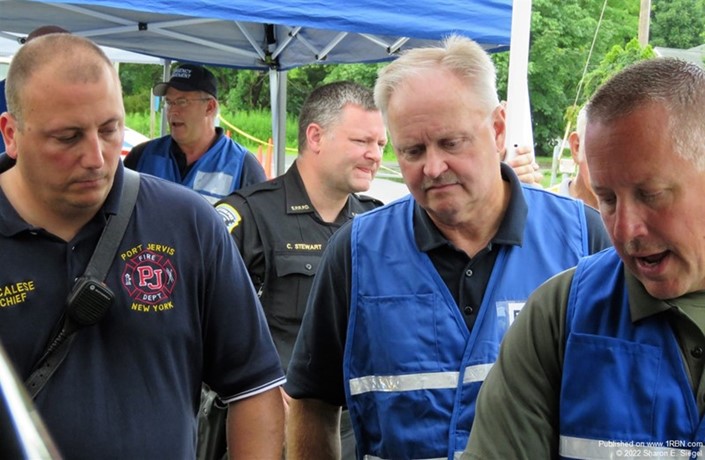 PORT JERVIS, NY – Port Jervis Fire Department’s most immediate Past Chief Dominic Cicalese was honored as one of four Grand Marshals in PJFD’s Annual Inspection Day Parade 2022. Cicalese will have provided 25-years of volunteer firefighting service in the department this year.

Cicalese was born in Jamaica Queens, NY on April 11, 1981. He moved to Port Jervis on his second birthday, the same day his father, late PJFD Past Chief Mike Cicalese, was installed as Port Jervis’ new postmaster. It was his father’s request for that postal transfer, and his parents wish for a better way of life, that indirectly led to firefighting paths for both father and son.

Dominic grew up in Port Jervis, graduated from PJHS in 1999 and then Orange County Community College. He is currently pursuing a legal studies degree from SUNY Berkheimer, and is a career firefighter with Middletown Fire Department, where he has worked for the past ten years. Dominic and his wife Carol have a young daughter, and are expecting a second child in August.

Cicalese is among many multi-generation Port firefighters who grew up visiting firehouses where a parent/parents served. His father, later a chief of the department, was a fireman at Delaware Engine Co. No. 2 which is where Dominic became a junior firefighter at 16.

“Families followed families in, and my dad was in this company so it seemed like the way to go,” Cicalese said.

Cicalese views Port’s multiple generations of family firefighters as a big advantage for the department.

“The lineage and heritage of families like the Kowals, Fullers, Moores and others are what is helping to keep it alive,” he said.
As soon as he was of age to move from Junior to firefighter, Dominic was qualified as an interior firefighter. He and Frank “Petey” W. Fuller, III, also a PJFD Past Chief, had attended multiple schools together and trained diligently so that they were both interior-ready at 18.

“As we were growing up, it was a way of life. We had fire bells in our house. All of the chiefs did. When I had friends over, they would hear the bells,” Cicalese recalled. “The bells went off for chiefs a second before the fire whistles.”

While chief bells may no longer alert him, Cicalese continues to respond to calls for help. For the past ten years he served as a PJFD chief, even though this was not anything he had aspired to.

“My father’s having been a chief had no bearing on my decision to run. It was a friend who asked me one day, “Why don’t you do this someday?” Cicalese said. “His question made me think. I had the time, age, and energy, so I thought I could help push the department forward and try to make it better. That’s why I ran.”

Cicalese, now 41, attributes the experiences he gained while growing up, and his early jobs, as helping him prepare for responsibilities as chief. As postmaster, his dad had instilled in him the importance of properly completing administrative work. In his early jobs, first with Jason Dobbs for ten years and later for Don Parker at Gray-Parker Funeral home, he gained experience in running a business and interacting with the public.

“I gained business experience with Jason, and learned how to be dignified in tough situations while working for Don,” Cicalese said.

His responsibilities as a firefighter brought additional life lessons, including leadership and decision-making experience.

Shortly after becoming captain of his company, and while his father was chief, the historic, sprawling three-story Canal-era Colonial Inn burnt in 2004. Extreme cold and intense flames were among challenging conditions Cicalese remembers firefighters having to deal with in fighting this fire.

“Everything was frozen. It was absolutely brutal,” Cicalese recalled. “The fire started in the basement, and I knew from the start it would be bad.”

Dozens of residents were safely evacuated and the fire eventually extinguished. However, the structure’s wooden rubble continued to smolder and re-ignite over several days.

In recent years, while he was chief, two large local fires occurred that brought life-threatening danger to firefighters and the need for difficult decisions by those in command.

“With Clark Motors (2019) we were out-gunned from the get-go. We even almost lost guys. It was windy, and we were giving it everything we had. We had to pull out, go defensive,” Cicalese recalled of the Kingston Avenue auto business blaze. “After, we made this decision at command we were able to bring it under control. But making a decision like that is one of the worst things to have to do as chief. You know this means you are making a decision to write a building off. It’s very tough, but sometimes it’s what you have to do.”

A similar decision had to be made in a multi-family structure fire (2021) at 72 East Main Street.

“We threw everything we had on that East Main Street call – our best trained firefighters, ideal water conditions, everything. But sometimes you just lose,” Cicalese said. “We had to make a call to abandon the interior fight and go exterior or risk losing firefighters.”

The old balloon-type expansive structure, built in the 1800s, was found to have a dumb-waiter elevator shaft that ran right through the center of the house. This space allowed the fire to rapidly spread from the basement to the upper floors, destroying the structure’s interior construction. Command, as always, had been in constant touch with firefighters in and around the building. Despite trying everything, the fire got completely out of their control and an evacuation order was issued.

“It was the right decision. We knew firefighters could be hurt or lost if anyone stayed in there. The back of the building collapsed just a short time later. We didn’t lose anybody,” Cicalese said.

Cicalese credits having excellent assistants and other officers working in “lock step” unison with him toward department decisions and goals. While they sometimes differed in approaches, he and Assistant Chiefs Anthony Fuller and Keith Brown were always aware that each decision affected the rest of the department and others. They were objective and in sync in what they brought forward.

“We are fortunate to have the experience of longtime active firefighters who truly care about the well-being of others, along with the energy of young hard-chargers. It’s an incredible mix that works,” Cicalese said.

Cicalese has always been aware that committing as a firefighter essentially means a lifetime of giving. It was what he had grown up around and seen from an early age. He compared the timeframe of each chief’s 12-year progression to a student’s school-year progression, first through 12th grade to graduation. That time commitment caused Cicalese to ask his now-wife Carol as they began dating if she was sure she wanted to get involved in a firefighter’s way of life. He cautioned her about the amount of time spent running out to meetings, training, and responses.

“Somebody’s got to pay. While firefighters are out helping to save the world, somebody is home waiting for them,” said Cicalese, who is grateful for his family’s support.

Now having completed his terms of office, Cicalese is glad for the breather this has brought him. He does not miss being responsible as duty chief for the constant river rescue call responses in summer months, always-interrupted meals at his mom’s – Linda Cicalese’s – house, nor continual chief investigations of automatic alarm calls. He does miss the constant communication between himself and other officers. While still in touch, it is no longer 24-7 as it was for so many years.

“It’s very non-ceremonial when your time is complete,” Cicalese explained. “On December 31, you’re that guy who is still responsible as chief, and then on January 1, you’re not. I needed the breather, but it’s hard to move on so fast after holding that spot for so long.”

Cicalese has moved on, and has lots of plans, including spending more time with his growing family. He will continue in his current PJFD role as Deputy Chief (DC3) and as both a volunteer and a career firefighter.

What were his thoughts as a grand marshal of his department’s 2022 annual parade?

“It’s crazy that I was a Grand Marshal of this year’s parade. I grew up in this department, and I was now part of leading its parade. My years as chief went by like that, too. I’m humbled and honored!”