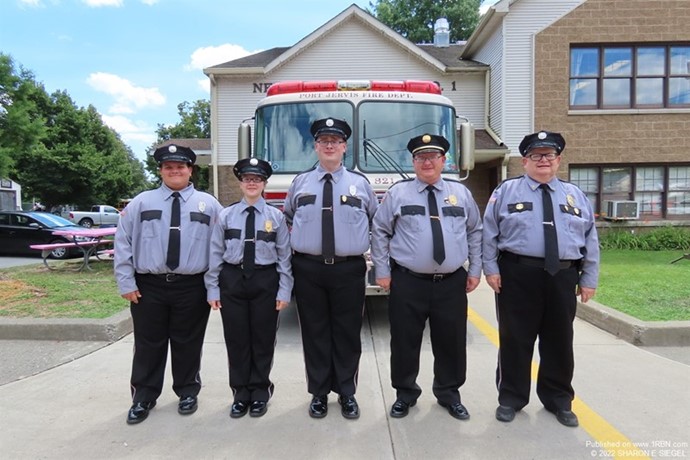 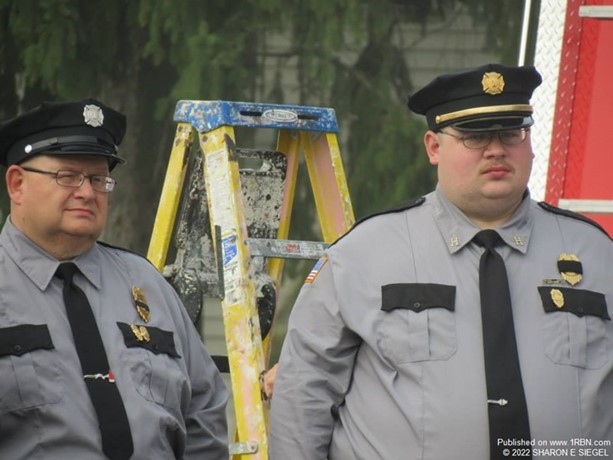 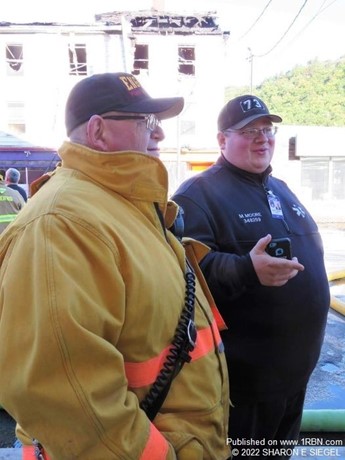 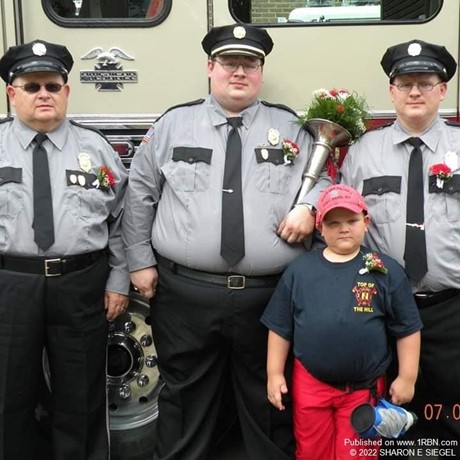 Photo by SHARON E SIEGELThree of four generations of Moore Family firefighters, which included the late PJFD Past Chief Douglas Moore. The youngest, shown here, is now a firefighter as well.

Photo by SHARON E SIEGELThree of four generations of Moore Family firefighters, which included the late PJFD Past Chief Douglas Moore whose grave is shown here during a visit in July by PJFD members to Past Chief final resting places. 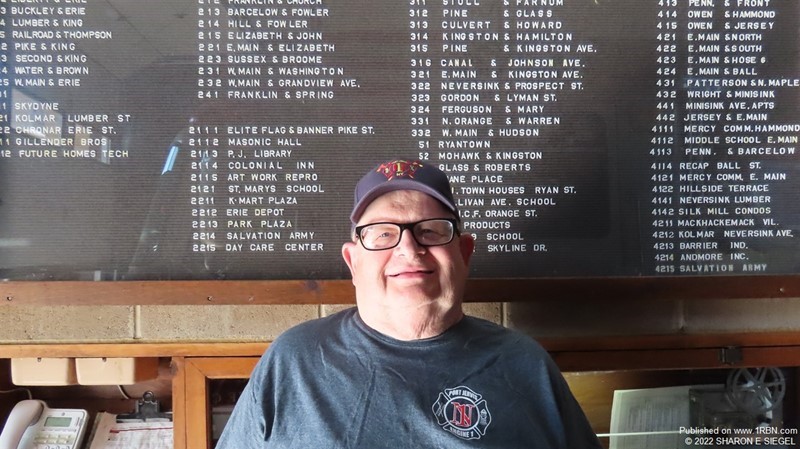 Photo by SHARON E SIEGELFifty-three year PJFD Firefighter and 2022 Co-Grand Marshal David Moore, Sr. is pictured by a past fire alarm board in his company's firehouse, Neversink Engine Co. No. 1. 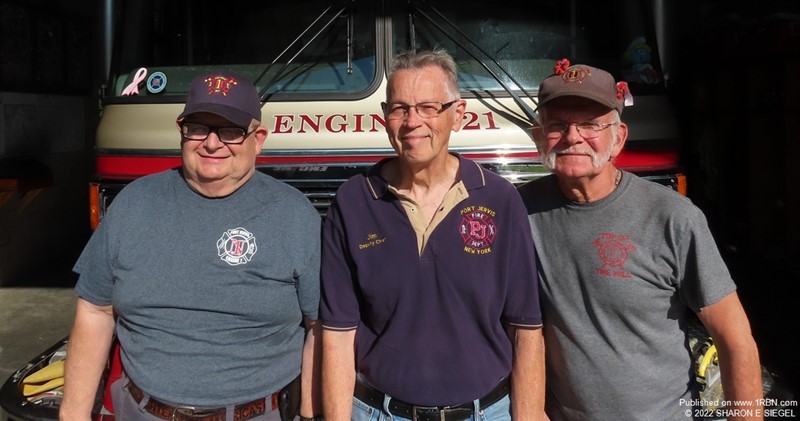 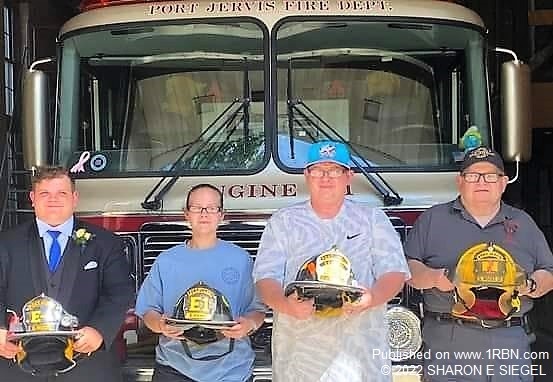 PORT JERVIS, NY – If your last name is Moore and you live in Port Jervis, NY, it’s a pretty sure bet that you will grow up to become a firefighter! David Douglas Moore, Sr., a Grand Marshal in Port Jervis Fire Department’s historic century-and-a-half-plus annual Inspection Day Parade this summer, is among four continuous-generations of his family’s firefighting service. He, along with three other decades-long firefighters, led PJFD’s parade this past July.

Currently in his 53rd year as an active Port Jervis Fire Department firefighter, Moore – along with his children and grandchildren – have continued the family service of his late father, PJFD Past Chief Douglas Moore. Past Chief Moore passed away nearly 30-years ago.
“I promised my dad that I would do all I could to help keep Port Jervis Fire Department going strong even after he was gone,” Moore said. “I miss him a lot. I was lucky to have two great parents who helped me get where I am today.”

Moore was born in Port Jervis on December 26, 1951. He was raised in his hometown and, inspired by his father, became a firefighter at age 18. While his father was a member of Tri-States Hose Co. No. 6, David joined Neversink Engine Co. No. 1.

“That’s where a lot of my friends were members,” Moore recalled.

One of those members was Jim Rohner (a fellow grand marshal this year). He also considers the late Past Chief Roscoe Case as one who influenced his desire to be a firefighter.

“Chief Case is a personal hero for life. He spent time with me and shared important lessons with me when I was a very young child,” Moore, Sr. recalled. “He was my hero then, and will always be my hero.”

In his career, Moore worked for the City of Port Jervis’s Department of Public Works (DPW) as a Motor Equipment Operator (MOE). He was always able to fit firefighting in around his work duties and family life.

As a firefighter over the past 53-years, Moore has served as President, Vice President, Chief Driver, Captain, and 1st Lieutenant in his company and as an interior firefighter. In recent years, he has been an exterior firefighter and driver. He remains one of the most active responders in his department.

“For me, personally, I no longer go into burning buildings. My typical response duties are now to drive and pump the engine,” Moore said.

Moore encourages anyone who wants to help their community, and has the interest, to do so as a firefighter. While New York State’s required training and schooling admittedly takes a lot of time, Moore says it can be fit into busy lives. He encourages beginning training at a young age, if possible, before getting busier with lifelong careers and raising families.

For the multi-generational Moore Family firefighters, such training and response history are simply part of their lives. Moore, Sr. followed his father into service. He was later joined by both of his and his late wife Sharon’s sons, David, Jr. and Matthew. David Moore Jr. is now Captain of Neversink Eng. Co. David Jr.’s and wife Heather’s two children, Brianna and David Daniel Moore, are both firefighters.

Many responses come to Moore’s mind in reflecting back over his five-plus decades of firefighting. Two are the Neversink Lumber fire and the deadly 1971 Pike Street building collapse, the latter of which came with serious injuries and loss of life.

“I was amazed at all the hard work my fellow firefighters were doing (during the collapse), and all the equipment they used to help people,” Moore said. “In my opinion, PJFD is one of the best departments in New York State.”

Moore said he learned early-on to trust his fellow brother and sister firefighters and to follow the orders of his chiefs and officers to the best of his ability. He attributes this to helping to keep himself and others safe over the years.

In recent months, along with many other calls, Moore was among responders to two recent life-threatening, very challenging fires. One was Clark Motor Sales’ business building on Kingston Avenue and the other a historic multi-family house located at 72 East Main Street, both of which have since been demolished and removed.

“When Clark Auto was on fire, I was overcome by smoke and fire. Live wires also fell on the engine. It was a tough one,” Moore said.

The intensity of the blaze eventually forced a call for evacuation of interior firefighters as it became a life-threatening situation that could not be contained from inside.

The house fire on East Main Street posed a similar danger. During this intense fire, Moore was stationed with his company’s truck in front of the house, alongside his firefighter granddaughter Brianna.

As flames continued to spread, interior firefighters worked from inside the large burning building to try to bring it under control. While making their way through the building, a dog was freed from one of the burning apartments. It has not been determined exactly who freed the dog, but the extremely frightened canine ran through the open front doors and laid down in the extremely thick haze of the smoke-covered front porch.

“I wasn’t sure with all the smoke, but I thought I saw what looked like a very scared dog that had come out and curled up in a fetal position, like a baby. When he came out, he saw only smoke and firefighters with masks and hoses. I think he was so afraid that he just didn’t know what to do, so he stopped and laid down,” Moore recalled.

Moore, who has always had dogs of his own, instinctively responded from his company’s nearby firetruck with a friendly voice and direction.

Moore did not realize until later, but besides being terrified, wet, and extremely hot, the dog had suffered severe burns on its paws. After running to the comforting care of Moore, a neighbor took the dog to her home where it stayed and was cared for until its owner arrived. Fortunately, following treatment by a local veterinarian, the dog was able to fully heal.

Now age 70, Moore plans to remain an active firefighter for as long as good health allows him to be of help. He finds serving the public as a volunteer fireman to be very rewarding, and is honored to have been chosen by his company as a grand marshal for this year’s parade.

He is grateful for the continued full support of his family, which includes fellow firefighters.

“Without my family’s support, I might not still be a member today. I never thought I would get this far in my career to experience this, or to be a Grand Marshal,” Moore said.