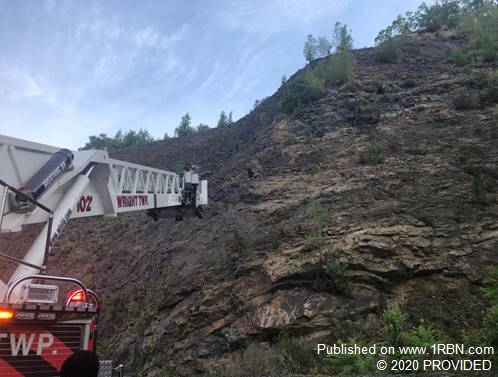 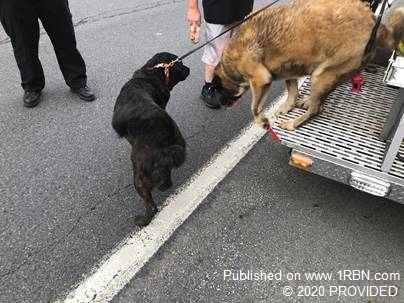 On July 30, 2020, the Hanover Township FD (Luzerne Cty) received a call for assistance from the Hanover Twp. Police requesting a ladder truck to Rt 309 for two dogs stuck on the side of a cliff approximately 50-feet up from the roadway.

Upon arriving it was determined that two larger dogs were stuck on a narrow ledge. It was unclear how the dogs may have made their way to the location, but it was certain they needed help getting down from the ledge. It was pure fate that the dogs were even noticed by a passerby who, on her way to work, stopped and contacted 911.

The Hanover Twp. FD realized that if they attempted to utilize the ladder that there was a good possibility that both dogs would try to get on the ladder and the outcome could have unfortunate consequences. At that point in time the Wright Twp FD was requested for their tower ladder to assist. In the interim, the owner, through social media, realized it was his dogs that were found and made his way to the scene.

The dogs were resting on the ledge until the owner arrived, at which time they got excited, making the situation more tense. The dogs, well mannered, were told to sit which they did allowing enough time for the Wright Twp. FD to arrive and get set-up for the rescue. The owner was placed in the tower, raised to the location and ultimately both dogs were secured and brought to safety.

The owner was thankful for a job well done in rescuing his animals. He stated the dogs were on the back porch of his residence when he went inside the house for a minute, however upon returning they were gone. The dogs had been missing for over 12 hours until rescued. As of the evening on July 30th, the dogs were in good shape and resting comfortably. Both Fire Chiefs from Hanover and Wright Twp. stated that this is one for the books with a real good ending.