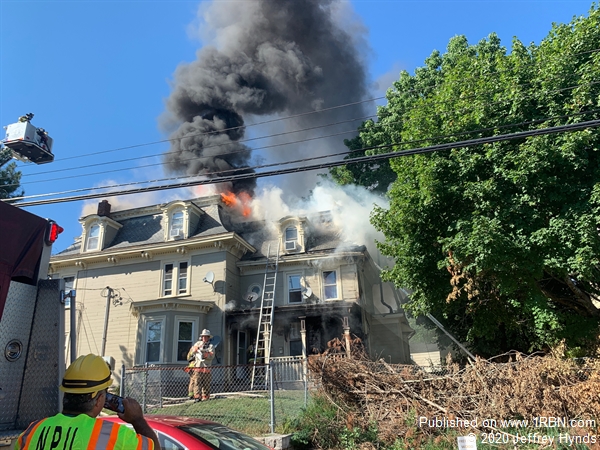 Photo by Jeffrey HyndsFire vents from the roof as members tried to extinguish it from the interior. 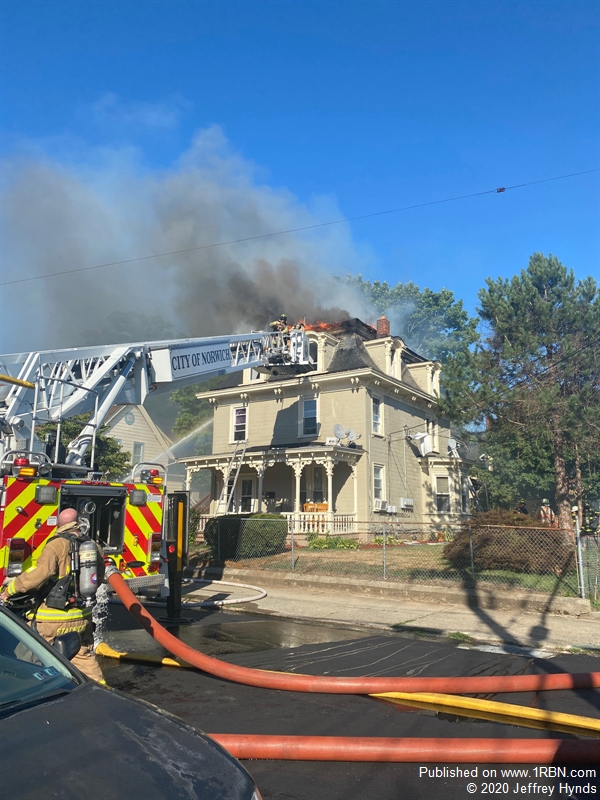 Photo by Jeffrey HyndsTruck 1 cut a hole in the rear and then used the ladder pipe through the third floor windows.

Norwich, CT - At 4:15 P.M. on Monday, August 3rd, the Norwich Fire Department was dispatched to 57 Hickory Street for a porch fire.

While responding, dispatch transmitted the working fire and said they were taking multiple calls. Engine 2 arrived at 4:18 P.M. reporting a three-story wood-frame occupied multiple dwelling with fire showing from the first floor 'Charlie/Delta' corner. Engine 2’s crew stretched a one-and-three-quarter inch hose line to the rear and knocked down the exterior fire.

Squad A laid in from a hydrant on Prospect, which fed Engine 2. Engine 3’s crew helped Engine 2 get their line to the the third floor while smoke pushed from the eaves. Truck 1 set up in the front and flew the aerial down the 'Delta' side where they cut the roof. After getting the water supply, Squad A assisted Engine 3’s crew stretching a line to the second floor. Crews opened walls on every floor and had fire extending into the cockloft. Battalion 1 assumed command and transmitted the second-alarm while Car 1 had operations.

Taftville Tower 25 backed up Hickory Street from Central Avenue and set up for defensive operations. Yantic Engine 33 laid in from a hydrant on the northern side of Prospect Street and fed Truck 1. Laurel Hill Engine 62 laid in from a hydrant on Central Avenue. East Great Plain Rescue 5 provided manpower for overhaul and filled cylinders. The Mohegan Tribal Fire Department provided the initial FAST, followed by the City of New London and the Submarine Base.

Crews worked for hours opening up while hitting hot spots. Three firefighters were transported to the hospital for heat related issues and one with minor injuries. The Norwich Fire Marshal’s Office, with assistance from the Norwich Police, are investigating the incident.