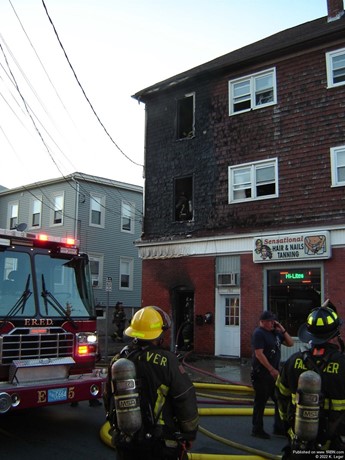 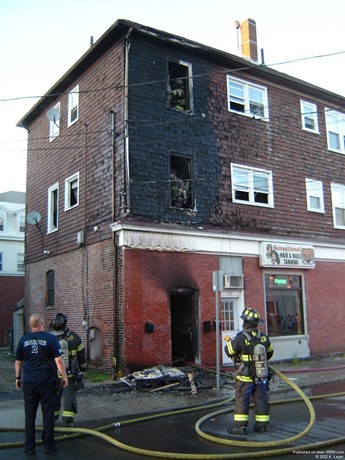 FALL RIVER, MA - A mother and her baby were forced to escape their home Wednesday night, August 3rd. They climbed down a fire escape to a roof where they were rescued by the crew of Ladder 2 over a ground ladder.

At around 7:20 P.M., firefighters were notified of a baby stroller on fire at 748 Globe Street. When Engine 5 arrived from their station approximately 100-yards away, flames were shooting 10-feet over the the roof line. Command had a stairwell completely involved with fire from the first floor to the third floor, with two occupants trapped on a lower roof needing to be rescued. He immediately called for a second-alarm and ordered Ladder 2 to use a ground ladder to remove the two victims who were transported for smoke inhalation.

The crew of Engine 5 pulled an attack line and hit the heavy fire venting from the second and third floor stairway windows before moving into the first floor entryway. The heavy fire damage appeared to be stopped in the stairwell with very little damage inside the apartments. Because of the tremendous head start this fire had, fire investigators were called in to investigate and a male was arrested and charged with arson within 18 hours of the fire being extinguished.