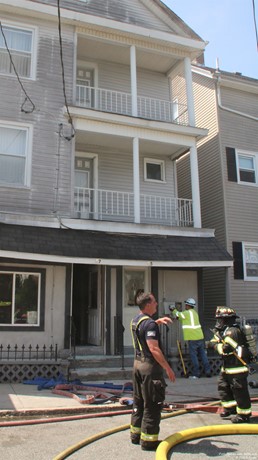 FALL RIVER, MA - On Sunday morning, July 24th at 11:00 A.M., firefighters were called to respond to 19 Norfolk Street for the report of a fire.

Platform 1 came on air and reported smoke showing on approach. Engines 2, 6 and 12, along with Platform 1, Ladder 4 and Heavy Rescue 1 responded on the initial alarm. When Car 2 arrived on scene he declared a working fire and called for a second-alarm.

Temperatures were in the low 90's and command called for Special Services to respond with their Rehab apparatus to set up a rehab area with cold drinks, wet towels, and cool mist fans to provide some relief to overheated firefighters.

Command eventually called for a third-alarm to relieve exhausted firefighters. Several pets perished in this fire. The local fire investigative team called in the state fire investigators to assist with origin and cause.