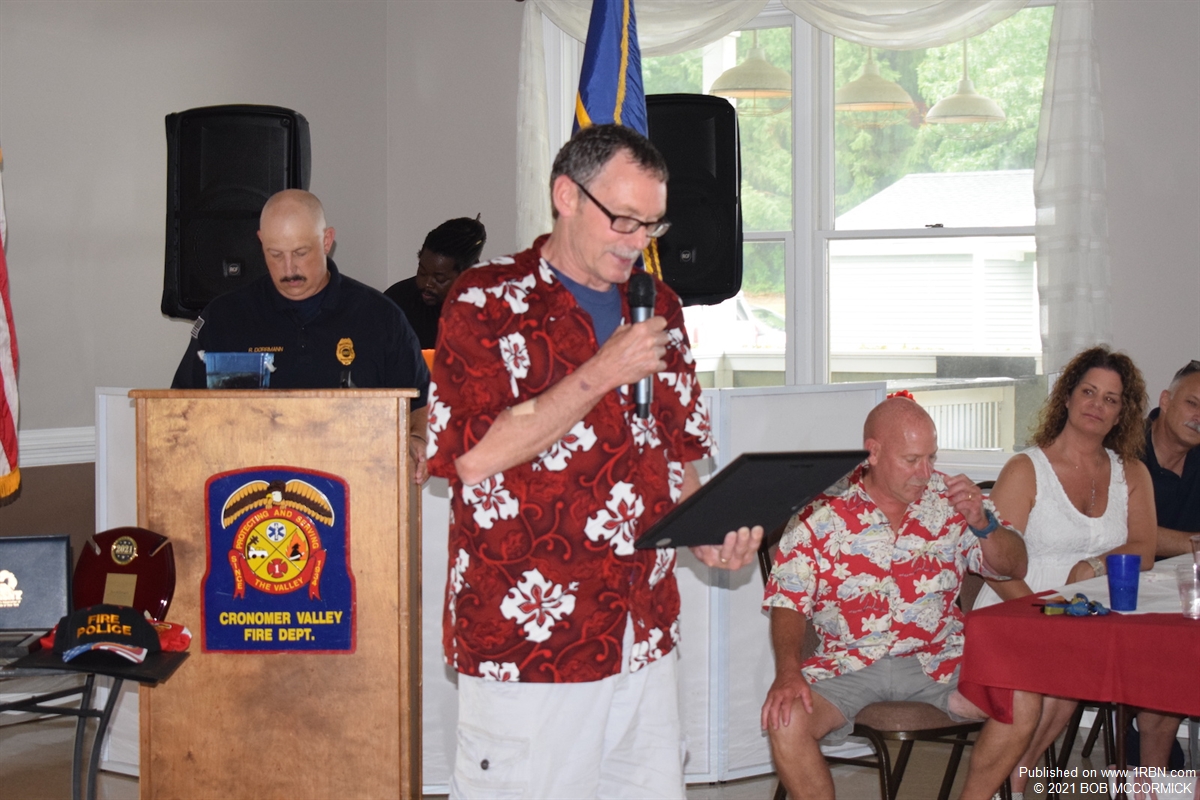 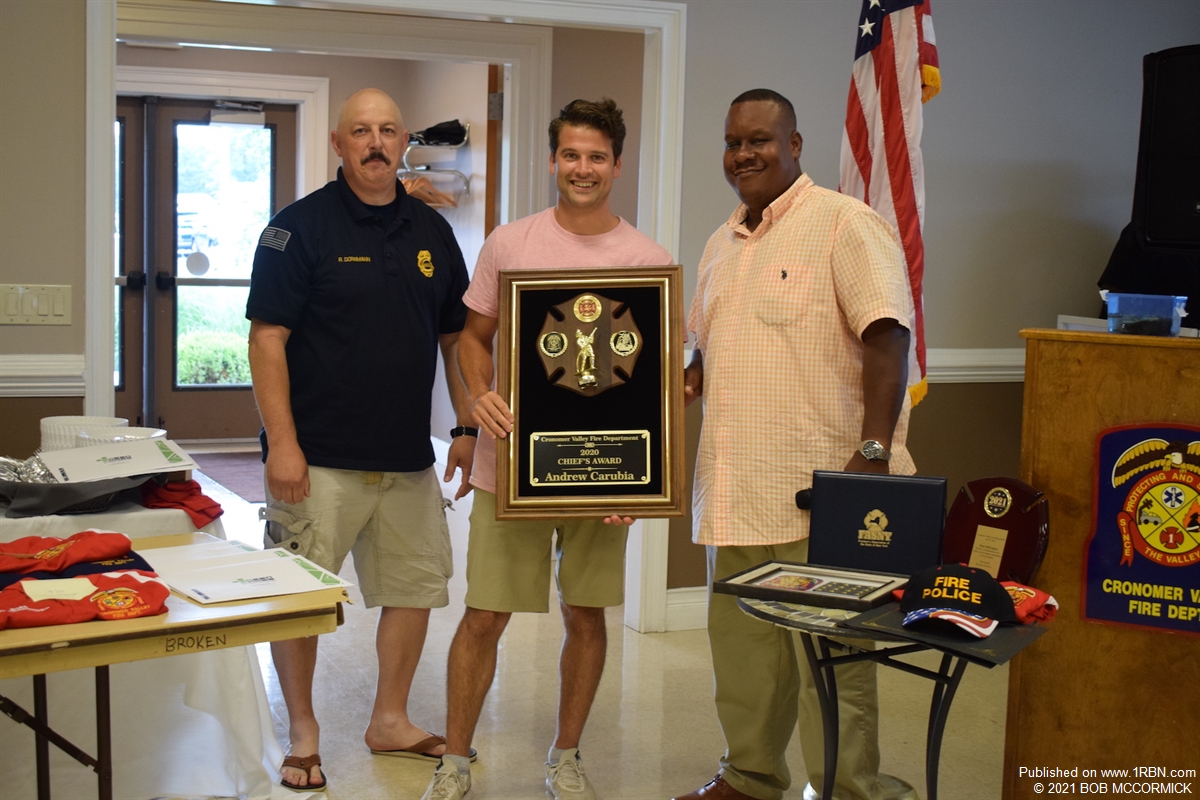 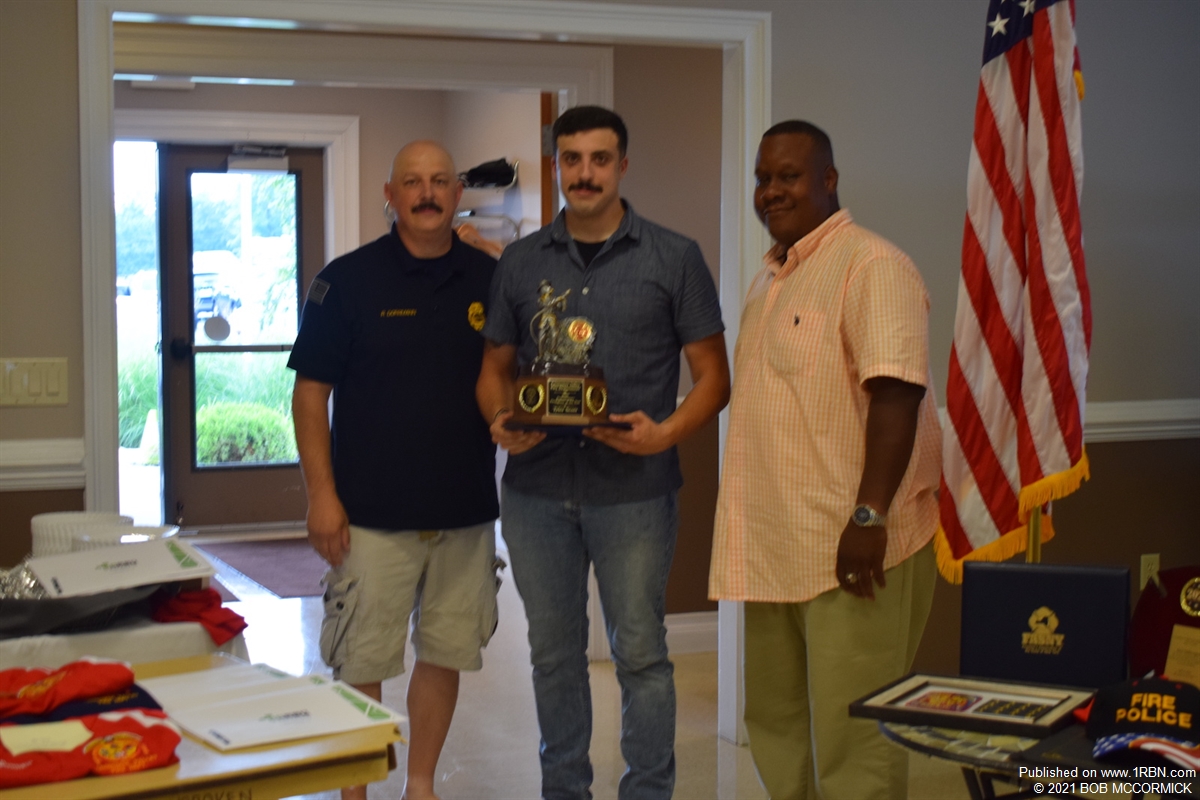 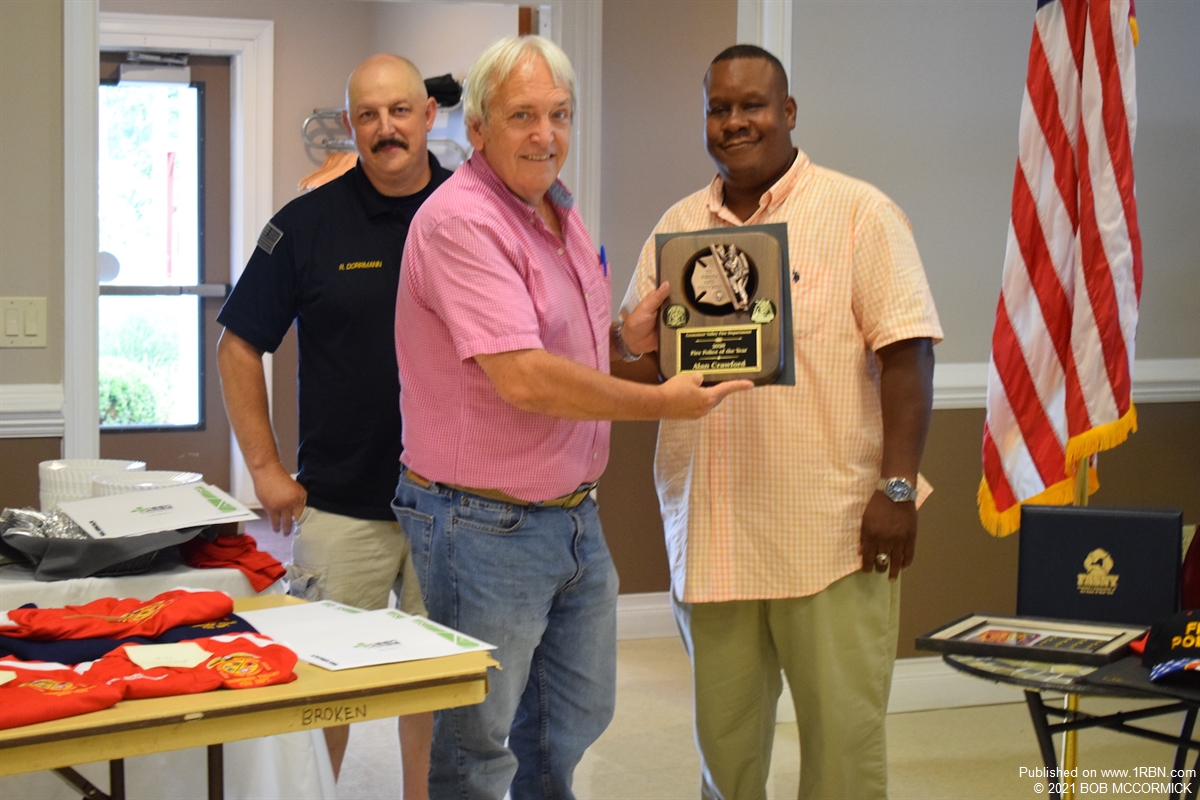 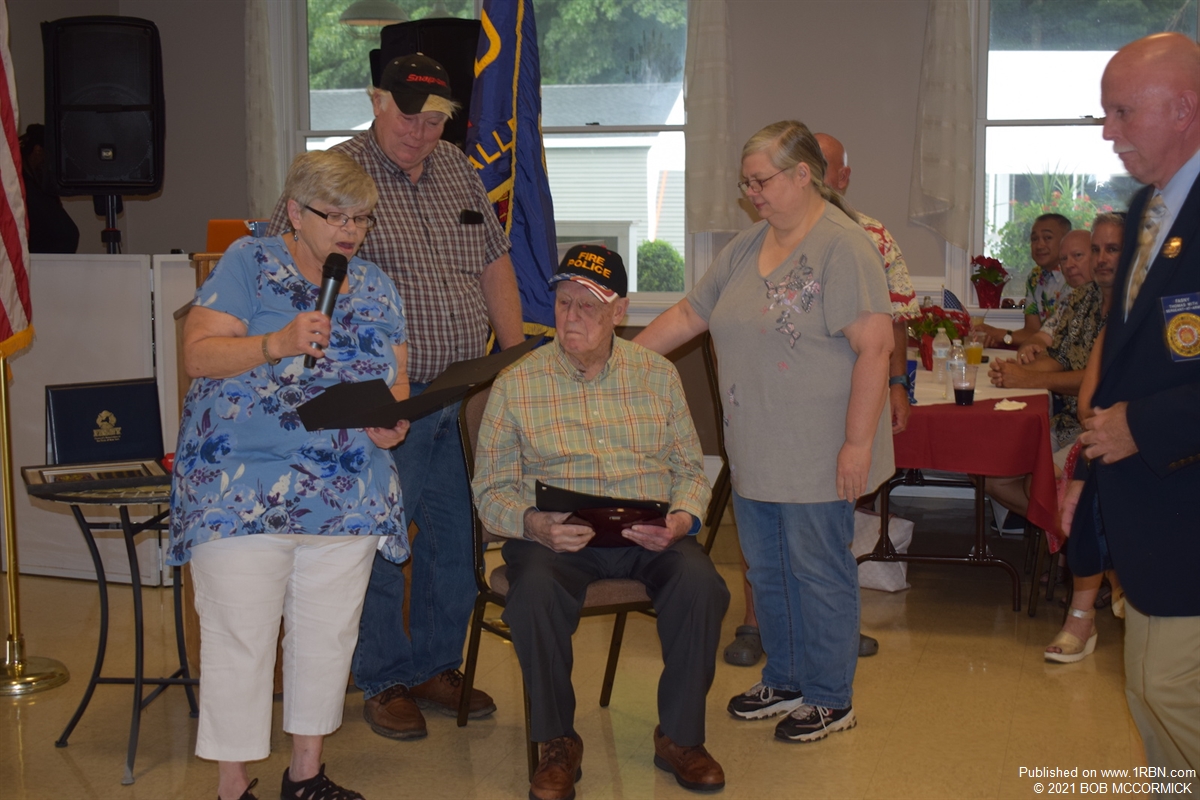 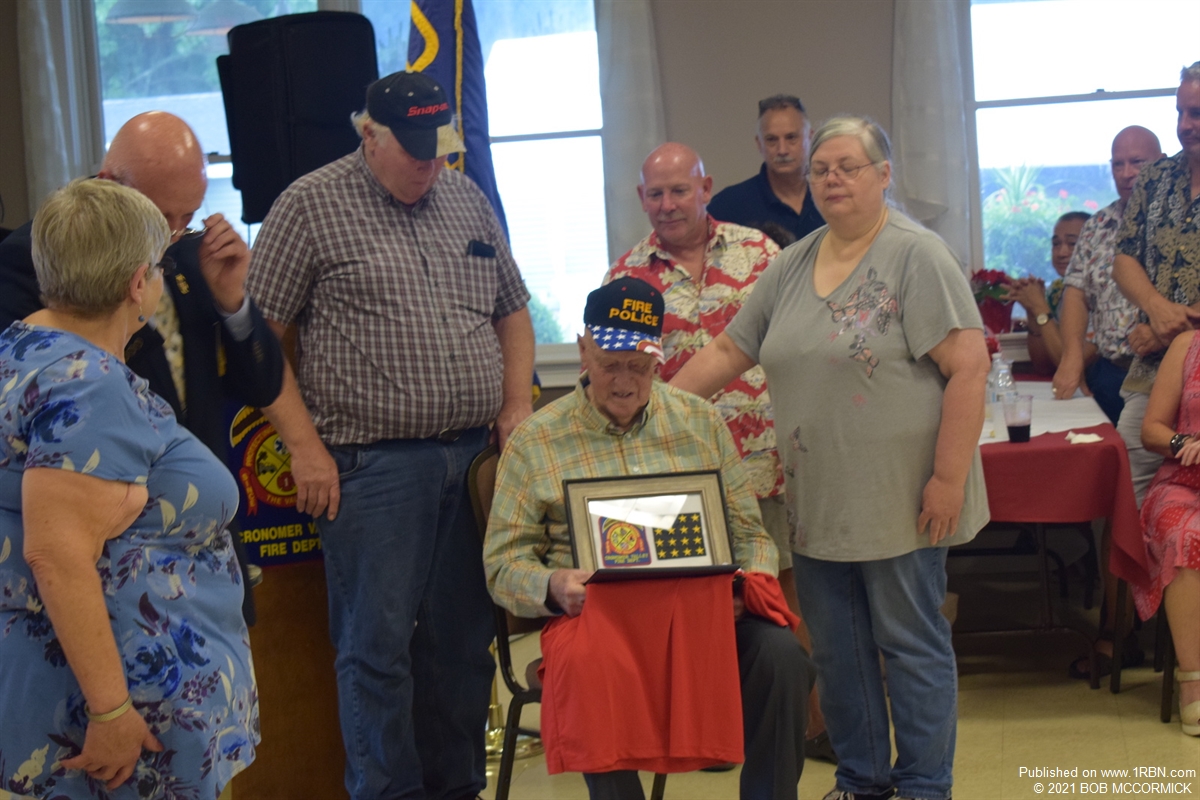 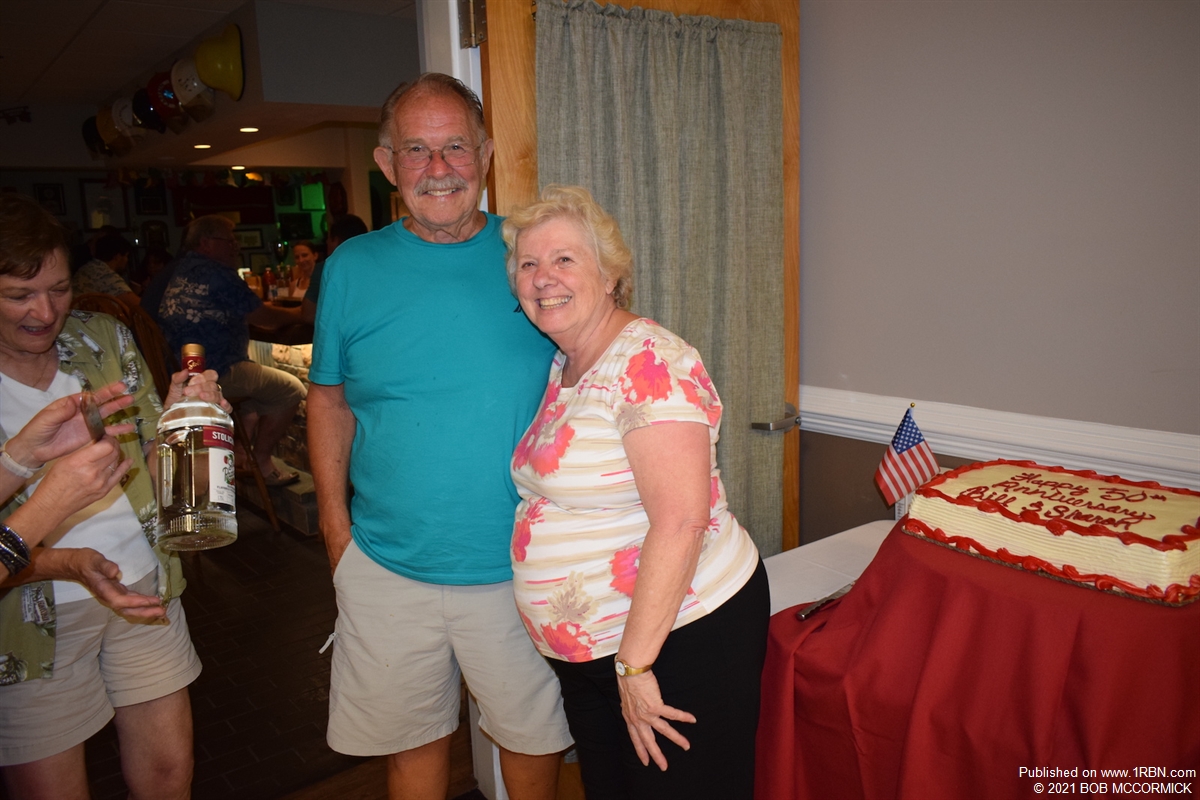 Cronomer Valley Fire Department held their annual picnic/awards dinner at their firehouse on July 17th. Members and guests enjoyed sitting and chatting outdoors under the tent. Pamela's on the Hudson catered the event. Inside, just before dinner was served, president of the company Jeff Miller thanked everyone for their outstanding work during the last two years. He mentioned that the pandemic was hard on all the members of the department, but we all got through it.

He acknowledged member Bill Bell and his wife Sharon, who were celebrating their 50th wedding anniversary. Also recognized was Don Stillwagon for his 80 years of service in
the Cronomer Valley Fire Department. Jeff Miller presented the President Award to Robert Quackenbush. Bob does the computer work and maintains all the data, also when needed he operates as driver for the fire apparatus.

Fire Awards were given out by Chief Bob Dorrmann. Receiving the Chiefs Award-AJ Carubia; Probationary member of year-Tyler Scott; Officer of the Year-AJ Carubia; Fire Police of the Year-Al Crawford.

Before the awards were presented Past Chief Juan Moreno III received his Past Chief Badge. Dot Brown and Robert With of the Fire Association of State of New York presented Don Stillwagon with a plaque and certificate from FASNY-Chief Bob Dorrman presented Don with plaque with Cronomer Valley Patch and Stars that firefighters wear on their sleeve for number of years in company. He also received a Fire Police hat and CVFD shirt. He received a standing ovation after the awards. Dinner was then served, and after dinner Bob and Sharon cut their cake and Don cut a cake made for his service to the department. Dancing was next --Another "Outstanding Job By the Valley".