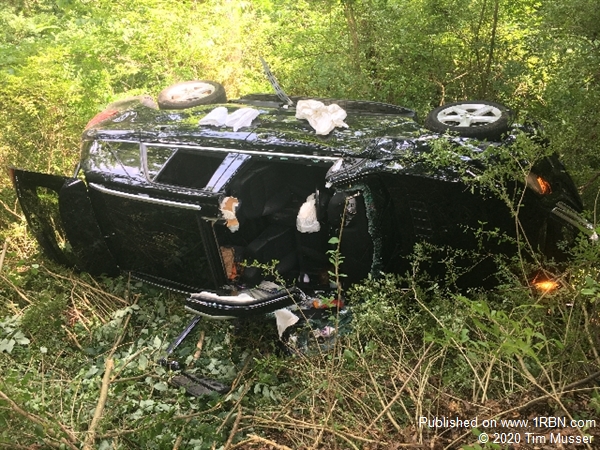 Photo by Tim MusserCumru Fire and Police units along with Southern Berks EMS arrived in the 2100 block of New Holland Rd. on 7/17/20 with this SUV overturned in the woods. The driver was trapped in the wreckage and had to be freed by firefighters.

Cumru Twp., PA - On Friday, July 17th, dispatchers at the Berk County Dept. of Emergency Services began receiving calls reporting a car accident involving an SUV around 1:42 P.M. Several reports advised that the vehicle had rolled, and that there were children laying around the vehicle.

Cumru Police Officers and Southern Medic 6824 arrived moments later and confirmed that several people were injured, and that the driver was trapped in the vehicle. Cumru Captain 42 arrived with the Rescue Engine and began assessing the scene while units from Kenhorst and Shillington were enroute for additional support. Crews stabilized the vehicle and carried equipment into the woods for the extrication.

Southern Berks Medical Technicians treated three juveniles while firefighters worked to free the driver. The trapped occupant was treated and prepared for packaging with the extrication completed at 2:13 P.M. The driver was transported to Reading Hosptial Trauma Center for treatment.

A total of 42 units remained on the scene for an hour while a tow company removed the wrecked vehicle.