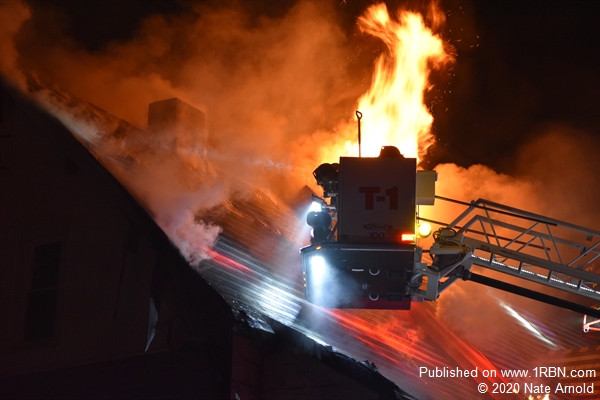 Photo by Nate Arnold Truck 1's bucket pulls away from their vent hole as heavy fire vents from the attic. 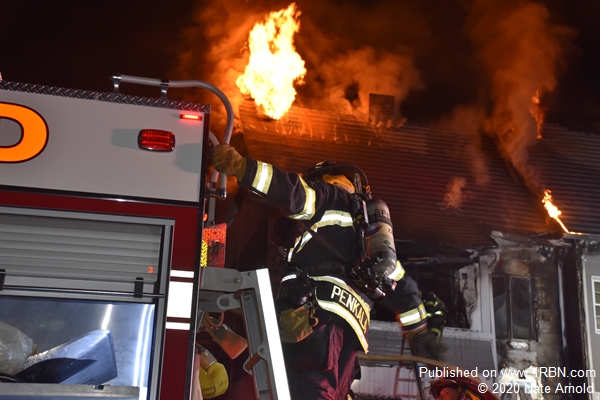 Springfield, MA - A large three-story Victorian style home in the Brightwood Square section of Springfield's North End was heavily damaged by a late night fire on July 17th that displaced several residents and sent two of the city's bravest to the hospital for treatment of non-life-threatening injuries.

The tones sounded shortly before 10:30 P.M. for companies to respond to 588 Plainfield Street, and dispatch was quick to note that SPD was on scene reporting the house as "fully involved."

Upon arrival, first due Engine 7 confirmed a working fire, stating that he had heavy smoke and fire showing from the second floor porch on the 'Bravo' side. Companies went to work stretching lines over ground ladders and via the interior stairs, and for a brief moment it seemed the fire may be under control.

When Truck Co. 1 vented the roof on the 'Bravo' side however, a seven-foot tongue of flame shot up from the roof and conditions soon began to deteriorate. Roughly 25 minutes into the fire fight, the evacuation signal was given and the second-alarm struck as the fire ate away at the attic and roof of the home.

Crews pulled out of the building and switched to a defensive attack, protecting the exposure buildings and using four aerial master streams as well as multiple hand lines to bring the main body of fire under control. The cause of the fire remains under investigation by the SFD Arson Squad.