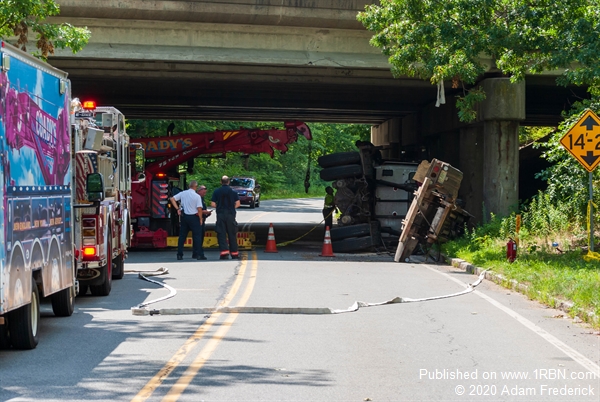 Photo by Adam FrederickEmergency crews stand by while tow operators rig the overturned truck to be flipped back onto its wheels. 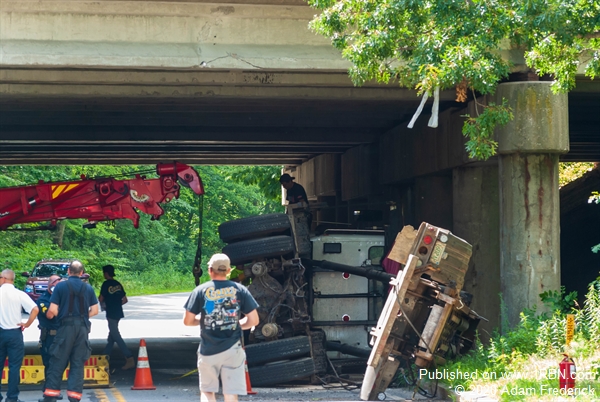 Photo by Adam FrederickTow operators rig chains to the overturned truck, which damage to the bridge is clearly visible

Methuen, MA - At around 1:45 P.M. on Monday, July 20th, Salem, NH and Methuen, MA fire and police departments began receiving 911 calls for a large truck that had struck the I93 overpass on Hampshire Road and then rolled over.

Upon arrival of the first responding companies, it was found that the incident was just over the border in Methuen, MA and that the driver had self-extricated. It was reported that a roll-off dumpster hauler had struck the I93 overpass on the northbound side, causing damage to the bridge structure. The truck was found laying on its passenger side, under the overpass structure. The driver was evaluated by EMS for minor injuries.

New Hampshire and Massachusetts Department of Transportation employees were called to the scene to evaluate the bridge structure for safety and stability. A heavy duty wrecker was called in from Coady's Towing out of Lawrence, MA. They responded with their 75-ton rotator to right the overturned truck and remove it from the scene.