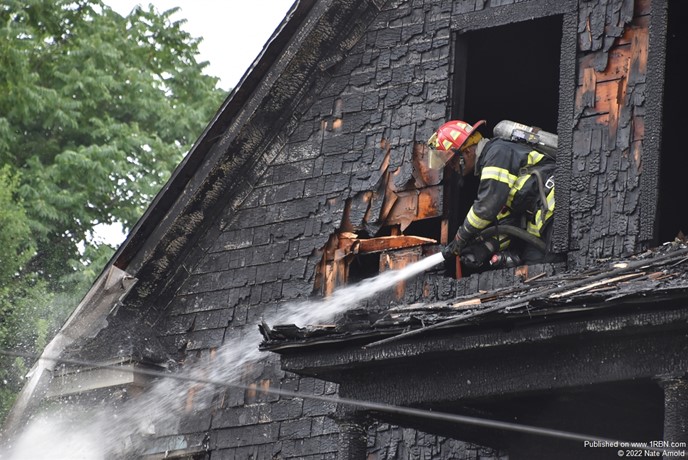 Photo by Nate ArnoldA hot spot is extinguished on the roof of the 'A' side porch.

SPRINGFIELD, MA - An Independence Day weekend fire left five residents without a place to stay and did considerable damage to the second floor and attic of a two-and-a-half story frame duplex in the Forest Park neighborhood of Springfield on Sunday, July 3rd.

Just after 8:00 A.M., 911 calls for the fire started coming into Springfield Fire Alarm and Engine 3 and Truck 3, the first due companies, reported that they could see the smoke column from several blocks away. When they arrived on scene, the threes were presented with a heavy fire condition on the second floor porch that was extending up into the attic of the home.

As the balance of the first-alarm assignment arrived on scene, crews stretched hand lines to the second floor while Trucks 3 and 1 worked to ventilate both sides of the peaked roof. Companies made fast work of the fire, knocking the main body down within 20 minutes, but then spent two hours overhauling the building.

The cause of the fire was investigated by the SFD Arson Squad and determined to be from the careless disposal of smoking materials on the second floor porch. The five displaced residents were assisted by the American Red Cross.