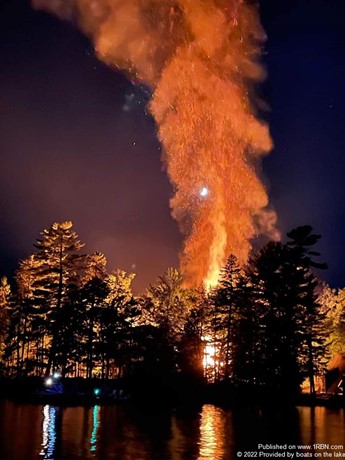 Photo by PROVIDEDLake view of the structure fire.

DEDHAM, ME - On Monday, July 4th at 9:47 P.M., the Dedham/Lucerne Fire Department was dispatched to an outside fire by the garage at 103 Hurd Point Road. The fire was then upgraded to a working building fire, with full mutual aid requested at 9:49 P.M. When it was advised that the RIT engine assignment was already tied up on other calls, an additional alarm was struck.

With limited access and narrow camp roads, units first arrived at 10:02 P.M. to find full involvement of a large two-and-a-half story 40'x30' garage. Multiple lines were stretched to protect the exposed house and extinguish the fire that was creeping into the woods. Rural water supply was set up from the lake approximately one-half-mile back, and multiple tankers shuttled water to the scene. All Dedham/Lucerne and mutual aid units worked diligently to get the fire under control. Mutual aid units were released and then Dedham/Lucerne units cleared the scene at 12:59 A.M. on July 5th.

The garage was a total loss, but the house was saved and only suffered some minor siding and window damage. No injuries to fire personnel and/or civilians occurred. The fire was investigated by the Maine Fire Marshal's office and was deemed accidental in nature, due to improper disposal of used fireworks.

A big thank you to all our mutual aid partners from Holden, Eddington, Orrington, Ellsworth and Northernlight Ambulance for their assistance at this incident.