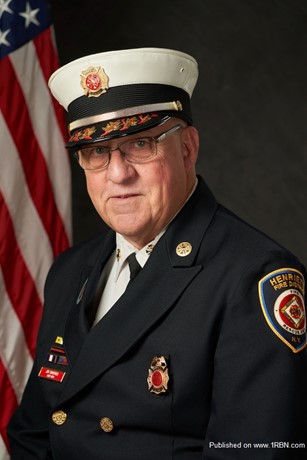 Chief James R. Comstock of the Henrietta Fire District in Monroe County was installed as president of the New York State Association of Fire Chiefs during the NYSAFC 116th Annual Conference & FIRE 2022 Expo Installation Ceremony, which was held on June 18, 2022, at the Marriott Syracuse Downtown in Syracuse, NY. He will serve a one-year term leading the statewide not-for-profit organization that represents more than 10,000 career and volunteer fire and emergency medical services personnel of all ranks from across New York state.

President Comstock joined the Henrietta Fire District in 1976 as a volunteer firefighter, rising to the rank of battalion chief. He became a career employee of the Henrietta Fire District in 1984, served as a firefighter, lieutenant, captain, battalion chief, and chief from 2006 until his retirement in 2017. Comstock holds a bachelor of arts degree in economics and business from Baldwin Wallace College. He served as an instructor for the Monroe County Fire Bureau for 13 years, was a New York state fire instructor for 10 years, and also served as a specialty lecturer for the Monroe Community College Criminal Justice Training Center for 12 years. Comstock served as an incident commander and operations section chief with the Western NY IMAT. He also served as an original member of the Monroe County Special Operations Leadership Team, as an IST member for the team, and was a New York state EMT and code enforcement officer. Comstock has been a member of NYSAFC since 2004 and served on the Paid Officers Committee from 2010-2015. He has also been active with the Career Fire Chiefs of New York State and served as president from 2011-2015. Comstock is a member of the International Association of Fire Chiefs, IAFC Volunteer & Combination Officers Section, International Code Council, and National Fire Protection Association.

Director Kalk, who joined the board of directors this year, has been a member of the Barneveld Fire Department since 2001. He became chief of department in 2010 and previously held the ranks of lieutenant, captain, and assistant chief. Kalk has also been a New York state EMT since 2007. He served as president of the Oneida County Fire Chiefs Association in 2021 and also served for five years on the board of directors of the Believe 271 Foundation, a charity that provides financial support to firefighters battling cancer and other life threatening illnesses. Kalk has been a member of NYSAFC since 2007. He is a Hands-On Training instructor for the association and previously served on the Volunteer Chiefs and Annual Conference Committees.