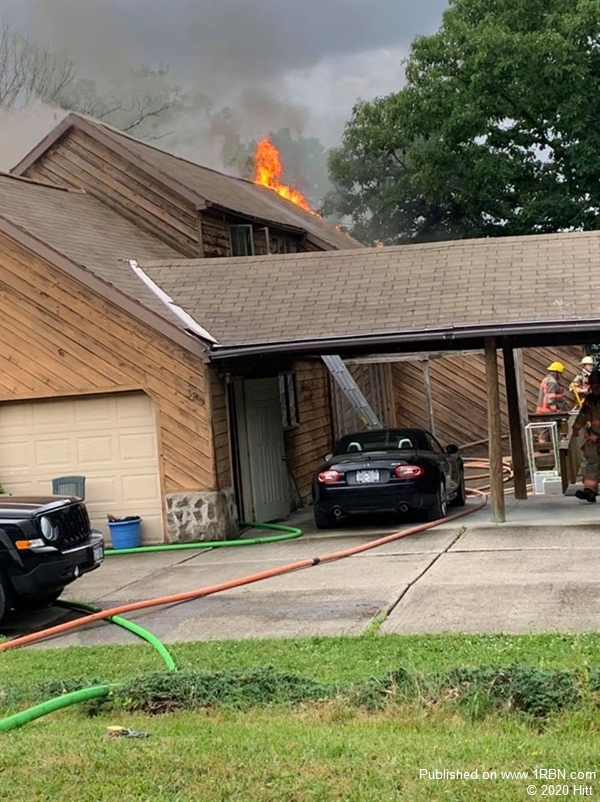 Photo by HittFlames at the roof. 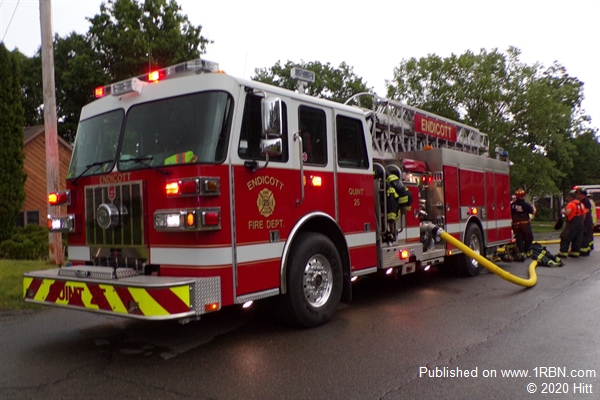 Endicott, NY - The Endicott Fire Department was dispatched to Skye Island Dr. for a reported house fire on June 18th, with reports that the house was struck by lightning.

Chief 25, 25A, Quint 25 and E25-1 responded. While en route, Chief Griswold could see heavy smoke in the distance in the vicinity of the incident address and requested a second-alarm, summoning EFD off duty personnel and neighboring fire departments.

Chief 25 arrived within minutes along with Quint 25 who layed in from the hydrant. Crews found heavy fire in the back of the house at the roof line. Crews, under the leadership of Captain Huften, entered the structure to find the seat of the fire inside. Crews found fire in the attic space above the second floor bedroom, made access and extinguished the fire while exterior crews knocked out the flames on the outside of the building.

EFD's quick response and rapid interior attack kept the fire from extending beyond the two rooms adjacent to the exterior wall where the lightning struck. Those two rooms did also receive smoke and water damage.

As always, thank you to our neighboring mutual aid departments for their quick response and on-scene work. West Corners, Vestal, Endwell and Union Center assisted at the scene with interior crews, a FAST team and an air trailer. West Endicott and Vestal stood by to cover the Village Of Endicott while East Maine, Glen Aubrey, Maine, Vestal and Union Center responded with tankers to supplement our water supply due to low hydrant pressure so close to the top of the hill.

Also on scene were Broome County Office of Emergency Services, Union Vol. Emergency Squad, NYSEG and Broome County Bureau of Fire Investigation who confirmed lightning as the cause. As always our brothers and sisters in blue, Endicott Police Department, were there to assist with whatever was needed.

This was another great example of how a quick response and multiple departments working together efficiently can get a job done easily and with the least amount of damage necessary.