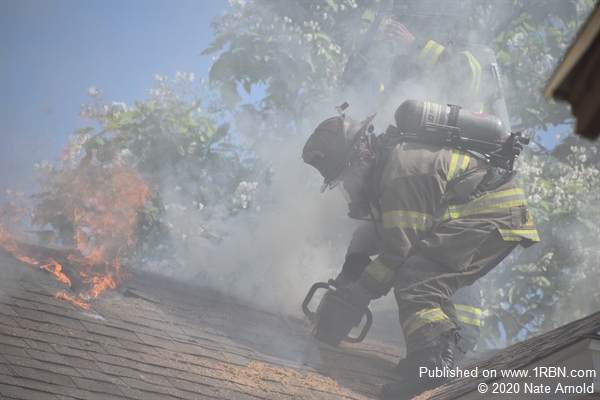 Photo by Nate Arnold Truck Co. 2 Captain Robert Duffy begins his cut on the Bravo Side of the peak at 589 Armory St. 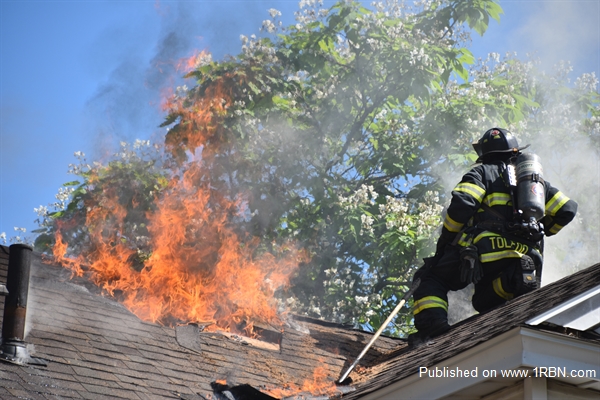 Photo by Nate Arnold FF Toledo from Truck 2 stands by after opening the vent hole.

Springfield, MA - An early afternoon attic fire in Springfield displaced seven residents and did several thousand dollars in damage to their home on June 22nd, while the Springfield Fire Department was also combating a multi-acre brush fire a few miles away at the same time.

The 911 call for the fire on Armory Street came in at 3:30 P.M. while half of the SFD's available manpower was still combating the brush fire, which had burned four acres off Corando Drive several miles away. Fire Commissioner BJ Calvi was the first to arrive on Armory Street as he was en route back to headquarters from the brush fire and called on scene with smoke showing from the attic of a two-and-a-half story, wood-frame dwelling.

With the normally first-due Engine 4 and Truck 4 still on Carondo Drive, Engine Co. 1 from downtown and Truck Co. 2 from Mason Square arrived first-in and worked in a coordinated effort; Engine 1 stretched their line to the second floor attic access and began putting water on the seat of the fire. Once the first water was put on the fire, Truck 2 set about opening up the roof, and after a brief flare up of fire, Engine 1's line put the final knock down on the fire just as the balance of the first-alarm assignment was making their way to the second floor.

With the main body of fire now under control, the remainder of the first-alarm companies set about opening up walls and ceilings and checking for extension. The bulk of the fire was knocked down within 15 minutes of the arrival of the full assignment. The cause of the fire remains under investigation by the SFD Arson Squad.