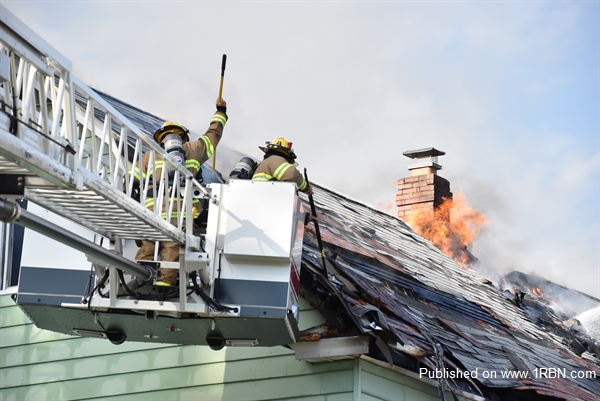 Photo by NATE ARNOLDTower 1 works on the soffit on the 'Alpha' side as fire vents near the chimney. 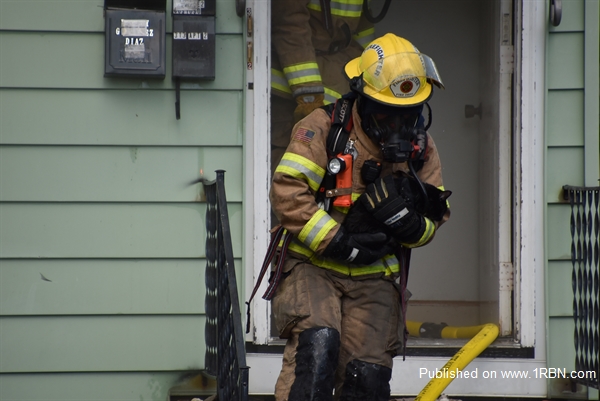 Photo by NATE ARNOLDOne of the feline residents is brought to safety.

CHICOPEE, MA - A stubborn, smoky fire damaged the second floor and attic of an occupied two-and-a-half story wood-frame dwelling in the Williamnsett neighborhood of Chicopee on Sunday afternoon, June 13th, and displaced 11 residents plus several pets.

WESTCOMM Public Safety Dispatch toned out Chicopee crews to respond to the address of 311 Chicopee Street at 4:30 P.M. for the report of a structure fire. Crews arrived to find heavy smoke pushing from the second floor and attic of the wood-frame dwelling at the reported address and stretched on the dwelling within six minutes of the alarm. Companies made an interior attack on the fire, but the fire put up a terrific fight. A second-alarm was sounded for the fire just 15 minutes after the first lines were stretched on the dwelling. Mutual aid companies from Holyoke, Springfield and Westover Air Reserve Base slid into the breach to cover empty Chicopee firehouses.

Crews on scene switched from an interior attack to a brief defensive attack to bring the main body of fire under control before going back inside to overhaul, check for hot spots and search for pets the residents were forced to leave behind when they fled the building. Thankfully, firefighters were able to locate the missing cats and water logged guinea pig and reunited them with their owners while the human occupants were being assisted by the American Red Cross.

The fire caused extensive damage to the roof of the home and remains under investigation by the CFD.