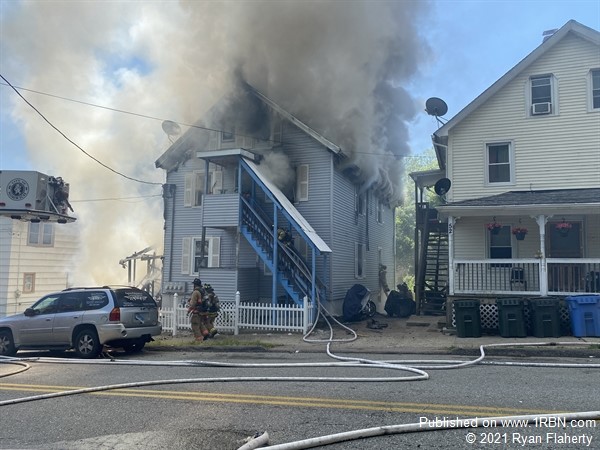 Photo by Ryan FlahertyEngine 2 darkening down fire on the bravo side while Engine 3 pushes into the second floor and Truck Company members perform VES. 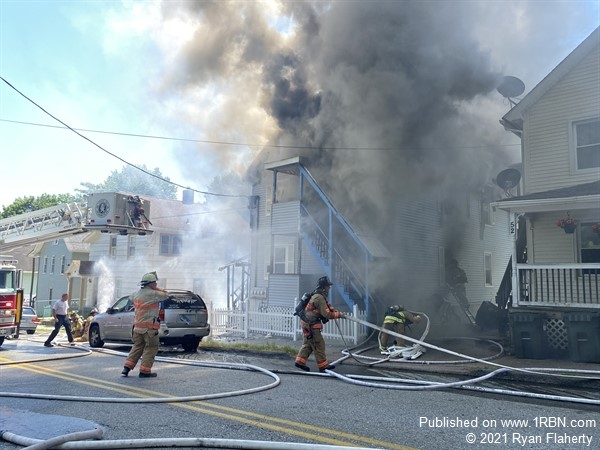 Photo by Ryan FlahertySquad A stretching a backup line while a member from Truck 1 enters the window. 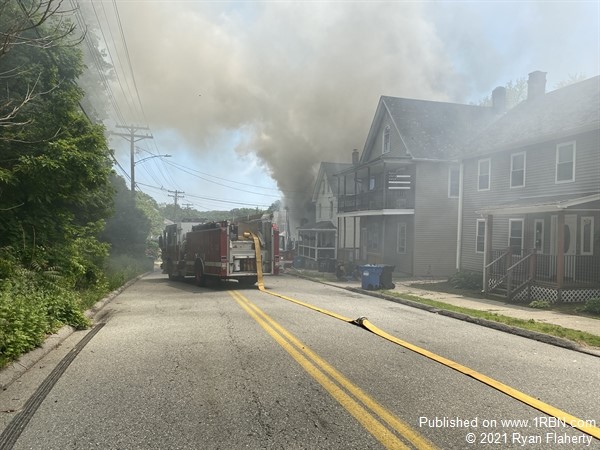 Photo by Ryan FlahertySquad A laid a supply line down the hill. 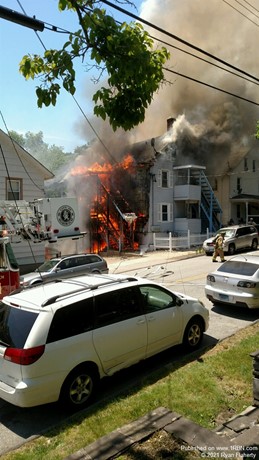 Photo by Ryan FlahertyThe fire had already extended into every floor of the residence when Engine 2 arrived less than 4 minutes after being dispatched. 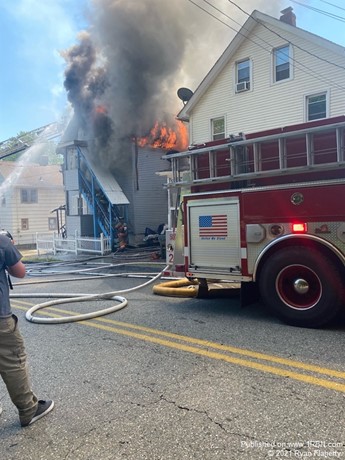 Photo by Ryan FlahertyFire rolling out the delta-side of the eaves which extended to the exposure.

NORWICH, CT - At 1:29 P.M. on Sunday, June 6th, the Norwich Fire Department was dispatched to a house fire at 48 Roath Street.

Battalion 1 signed on at 1:30 P.M. and requested the second-alarm because he had a large header visible from headquarters. Engine 2 arrived at 1:33 P.M. reporting heavy fire from the 'Bravo' side of a two-and-a-half story wood-frame residence.

Engine 2 stretched the first line to the 'Alpha'/'Bravo' corner and began darkening down a large volume of fire from the exterior which was threatening an exposure. The Battalion arrived at 1:34 P.M., established command and requested the third-alarm into headquarters for staging. Engine 3 stretched a cross lay up the front exterior stairs and into the second floor. Squad A laid a supply line from a hydrant on the corner of North Cliff Street and then assisted Engine 3 with advancing their line into the second floor.

Neighbors reported a woman trapped in the first floor living room, so two members from the truck company set up the little giant ladder and performed vent, enter and search from the 'Delta' side. Truck 1's driver set the aerial up to the roof and performed vertical ventilation. Crews were able to complete the primary search of the first and second floors while fire was quickly consuming the building, so command ordered companies to evacuate. Smoke began pushing from the eaves and chimney of the 'Delta' exposure, so Engine 33 took a line into the first floor while Squad A and Engine 3 stretched a line to the third floor.

Crews found fire running the walls and across the attic. New London and Taftville firefighters cut the roof of the dwelling. Crews operated inside for about 20 minutes before command ordered everyone out of the building. Members set up large caliber hose streams and used the ladder pipes from Truck 1 and Tower 25 before going back in for overhaul.