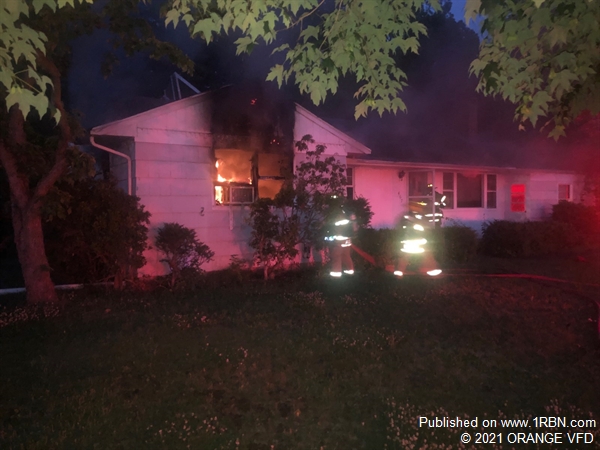 Photo by ORANGE VFDFlames are still visible from the corner of a house where Orange firefighters handled a fire last night. 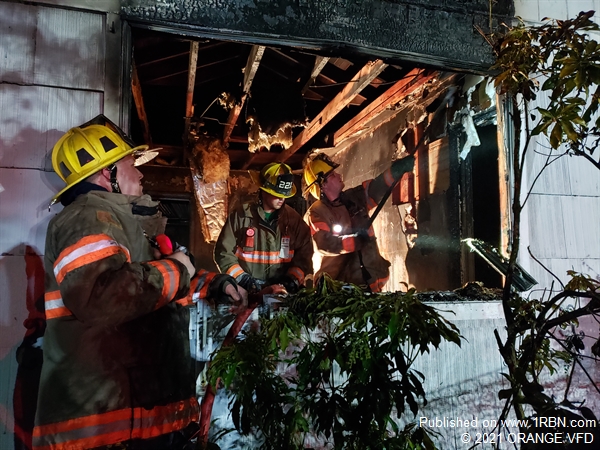 Photo by ORANGE VFDFirefighters check for hotspots as they overhaul the bedroom where a housefire began last night.

ORANGE, Conn. – Fire officials in Orange are continuing their investigation of a house fire that broke out Thursday night, June 10th.

Members of the Orange Volunteer Fire Department received the alarm just before 9 p.m., said Fire Chief Vaughan Dumas. First arriving firefighters reported that fire was visible in the bedroom window in the left front corner of the home at 467 Ridgeview Road.

“Firefighters made entry to the home and knocked the fire down quickly,” said Dumas. “It was under control a little after 9 p.m. Their aggressive attack prevented the fire from spreading beyond the bedroom and its contents.”

The chief added that the entire home received smoke damage. He estimated damage to the house to be about $200,000.

The homeowner was examined for smoke inhalation by EMS providers from American Medical Response but was not treated or transported. There were no injuries.

Fire Marshal James Vincent said the cause of the fire is still under investigation, but improperly discarded smoking materials are believed to play an accidental role in the ignition of the fire. He added that there were working smoke detectors in the house.
The Woodbridge Fire Department sent apparatus to the town in case of another incident, and members of the Orange Police Department were on scene to lend assistance.