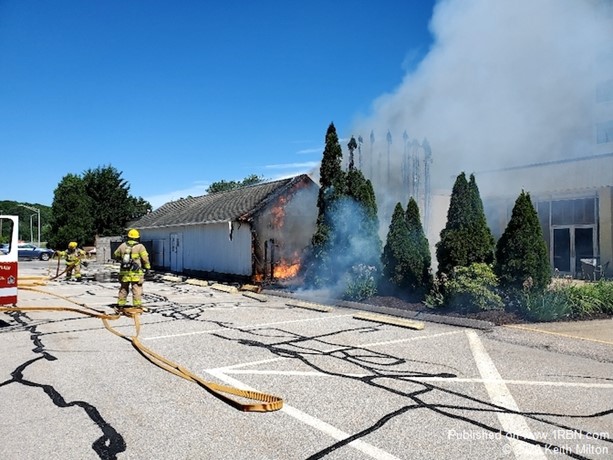 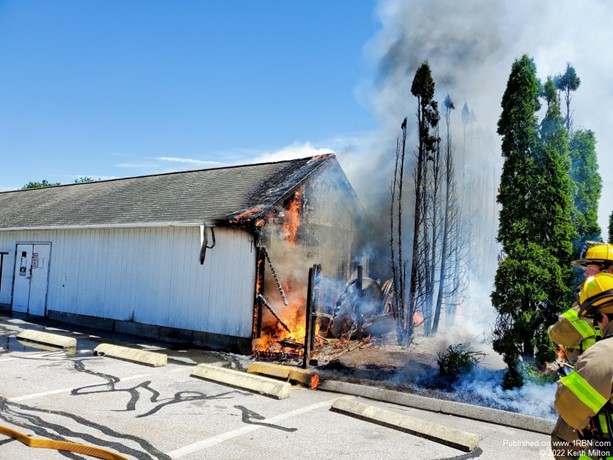 Photo by Keith MiltonCrew waiting for the line to be charged. 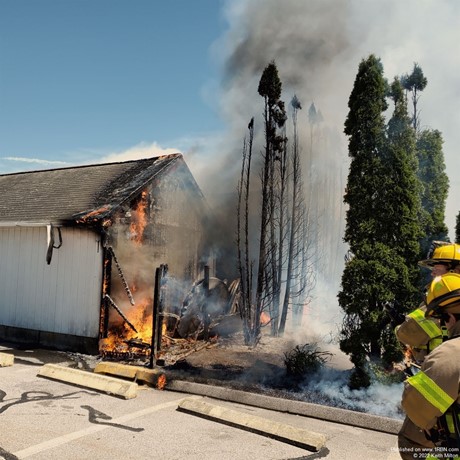 On Sunday June 5, 2022 at approximately 14:50 hours, Norwich 911 received numerous 911 calls and report from the CT State Police that there was a fire behind the Norwich Holiday Inn. The East Great Plain Volunteer Fire Company (Norwich, CT) was dispatched. While Car 5 was responding, dispatch advised the State Police were on scene reporting smoke and fire from the back of the hotel. Car 5 requested a second alarm prior to arrival as not knowing what was burning and the it being a hotel. Upon arrival of Car 5, he found a fire in a bed of mulch and had extended to a maintenance out building about 50' x 30' for the hotel. The building has about 2' separation from the kitchen section of the hotel. Ladder 5 arrived and the crew pulled an 1 3/4" hose line and began suppression. Engine 3 and Truck 1 from the Norwich Fire Dept arrived. Truck 1's crew was assigned to go into the kitchen area of the hotel to check for any fire extension. Engine 3 tied a supply line to Ladder 5 as they were just running out of water. EGP Engine 52 arrived and layed a 5" supply line from the hydrant to Ladder 5. EGP ET51 arrived and pumped the hydrant. Yantic Fire engine Company arrived and assisted with salvage and overhaul. Mohegan Tribal Fire Dept was on scene as the FAST team. Laurel Hill Fire Company Hose Tender 6 was staged and Taftville Fire Dept's Tower 25 was returned. The fire was extinguished in about 10 minutes. Two sprinkler heads in the maintenance building had activated and kept the fire from spreading further into the building. The Norwich Fire Marshals Office is investigating. There were no injuries at this incident.