One Rescued from Early Morning Fire in Reading 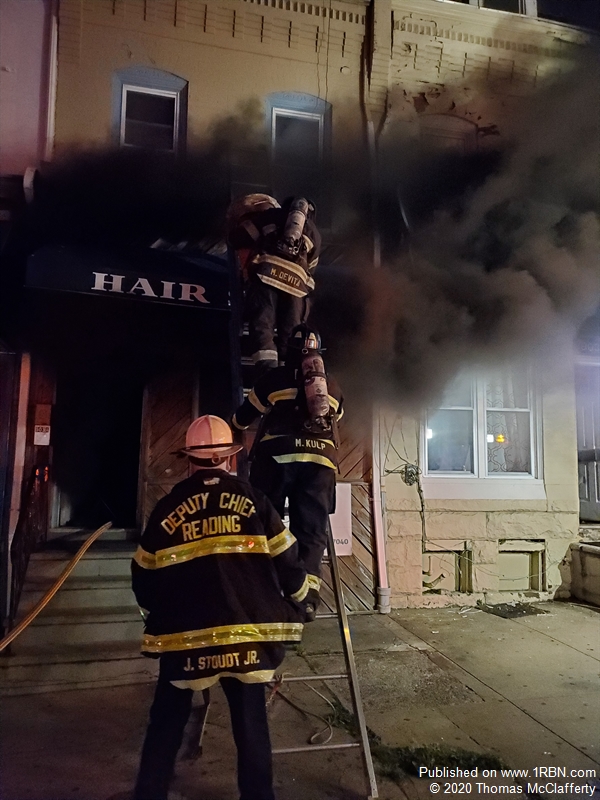 Photo by Thomas McClaffertyReading Deputy Chief James Stoudt Jr. steadies a ladder for Mark Kulp and Marc Devita as they work to remove a victim trapped above a first-floor fire.

Reading, PA - Early on the morning of May 31st a box alarm was transmitted for 903A North 9th Street. With companies responding, Berks County DES dispatchers reported additional phone calls advising that there was still someone inside the building. Ladder 3 arrived with smoke showing from a three-story tax-payer. Seconds later, firefighters observed someone hanging from the second-floor window through the smoke. Firefighters immediately placed a portable ladder to the window to effect a rescue. The victim was removed and handed off to paramedics for treatment and transport. With the ladder rescue in progress, crews stretched a line into the first floor of the structure. With fire extending up the rear, an additional line was stretched. Firefighters were told by neighbors there was another person in the building. All searches proved to be clear with the other occupant escaping prior to the fire department arriving. Deputy Chief Stoudt (C4) placed the fire under control 45 minutes later at 5:31 A.M. The building housed a hair salon on the first floor with apartments on the second and third. No injuries were reported, and the Fire Marshal's Office is investigating.


This article is a direct street report from our correspondent and has not been edited by the 1st Responder newsroom.