Attic Fire Lights Up the Night Sky in Holyoke 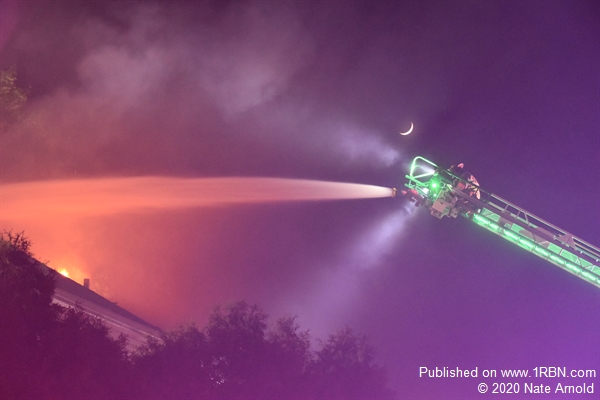 Photo by Nate Arnold Engine 5's ladder pipe works the 'Delta' side of the roof on Oak St. 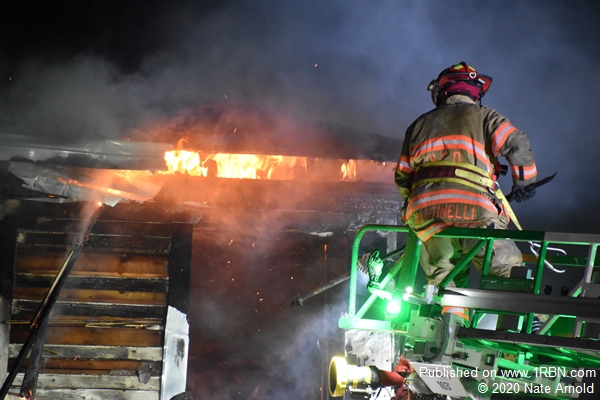 Photo by Nate Arnold Truck 2's officer opens the soffit over the 'Alpha' side dormer.

Holyoke, MA - A fire that destroyed the attic and roof structure of a multi-family home in Holyoke on May 25th drew large crowds of onlookers and lit up the early evening sky as firefighters fought to bring it under control.

Calls to 9-1-1 reporting the fire started coming into Holyoke Fire Alarm shortly after 8:00 P.M., and the first companies on scene encountered heavy smoke and fire venting from the dormers of this large three-story wood-frame dwelling.

First alarm companies began an interior attack on the fire and put in a strong effort to make the third floor of the building, but were pushed back by high heat and deteriorating structural conditions. Oak St. command ordered the second-alarm to be struck shortly thereafter, bringing most of the remaining on duty Holyoke jakes to the scene and requiring station coverage from neighboring departments.

A defensive attack was set up on three out of four sides of the building, using ladder pipes on the 'Alpha', 'Bravo' and 'Delta' sides of the structure.

Crews remained on scene well into the night chasing hot spots and overhauling the building. The cause of the fire remains under investigation. In all, seven residents were displaced but are being assisted by the Red Cross.