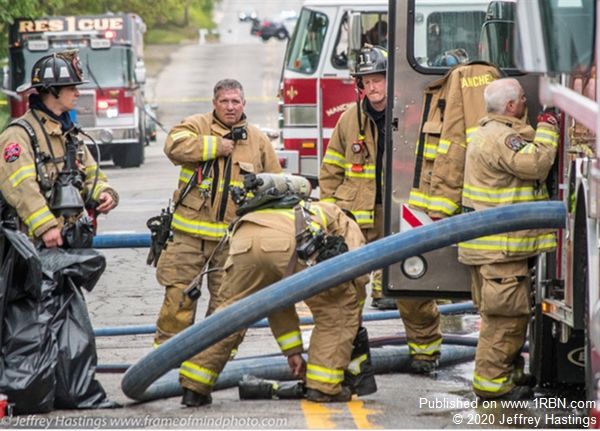 Photo by Jeffrey Hastings Manchester NH Firefighters take a well deserved break at this devastating fire after reviving one of there own firefighters who collapsed inside the burning building ! 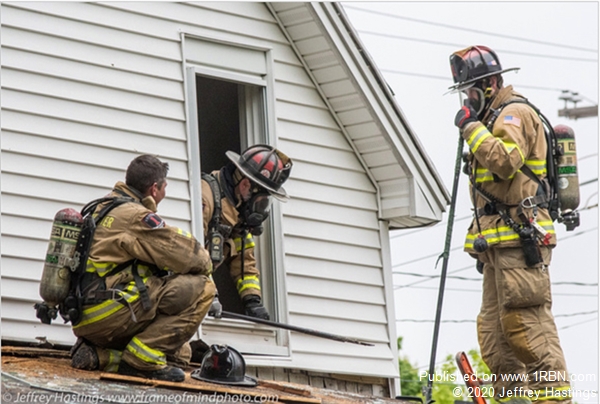 Manchester, NH- A working fire at 466 South Beech Street in the city prompted a "Firefighter Down and May-Day" on Monday morning, May 25th, at 10:30 A.M.

First due Engine 9 found heavy smoke showing from a residential house as firefighters immediately entered to attack the fire and make searches. The 51-year-old city firefighter, who is a 24-year veteran of the Manchester Fire Department, was just inside the doorway when he collapsed.

"He was part of the initial team that responded from Engine 9," Fire Chief Dan Goonan said. "It's such a matter of minutes in these situations. If he had collapsed on the second floor, they may have not found him and started CPR as quickly as they did. He is in serious condition, but given the conditions I'd say he is doing remarkably well." The firefighter remained unconscious and was listed in serious but stable condition.

Chief Goonan said the cause of the fire appears to be from an overloaded electrical cord and estimates the damages to the home to be around $75,000. The fire was knocked down by 11:00 A.M.

"The Manchester Fire Department would like to commend the on-scene crews, as well as AMR Ambulance and the Elliot Hospital staff for their tremendous efforts in saving the life of one of our firefighters," Manchester Assistant Fire Chief Brendan Burns said in a statement. "Today was a reminder of how difficult and dangerous our job can be, as well as an example of the tremendous emergency responders and hospital staff that our city is lucky to have."