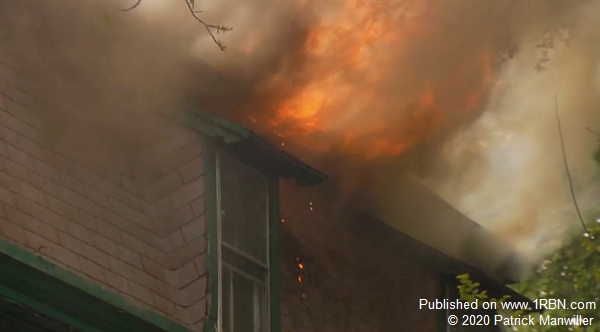 Photo by Patrick ManwillerReading Firefighters were confronted with a wind-driven fire at 239 Greenwich Street. A second alarm was requested for additional help. 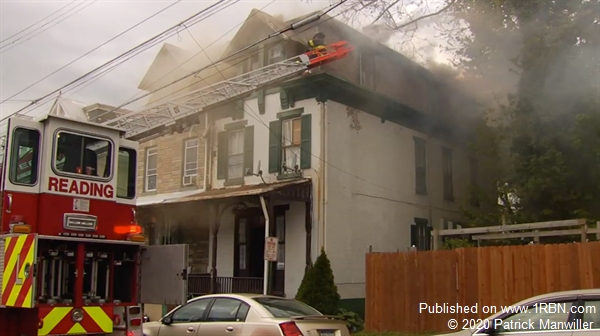 Photo by Patrick ManwillerLadder 1 weaves their Seagrave Aerial through several power lines to make the roof during this top floor fire at 239 Greenwich St.

Reading, PA - Shortly before 4:30 P.M. on Monday, May 11th, dispatchers at the Berks County DES began receiving phone calls reporting a fire in the 200 block of Greenwich Street.

Chief Kemery (C3) arrived at a three-story semi-detached, multiple-dwelling with smoke showing from the rear. Initially, it was believed that a fence was burning in the backyard due to the smoke obscuring the side of the structure. Seconds later, a wind gust displaced the smoke and fire was observed from the third floor.

Firefighters stretched a line to the rear of the home and accessed the upper floor via a fire escape. With the wind gusting the fire spread rapidly and threatened the attached side. Chief Kemery requested a second-alarm for additional help at 4:46 P.M.

Ladder companies had difficulty accessing the roof due to the number of overhead wires in the area. Crews would eventually reach it after placing a roof ladder perpendicular to the tip of the aerial beam. Additional hose lines were stretched from both Engine 7 and Engine 3 to support firefighting operations.

The fire was placed under control at 5:11 P.M., with a large amount of overhaul following. No injuries were reported, and the Fire Marshal's Office is investigating. Firefighters from West Reading, Wyomissing and Spring Township assisted.