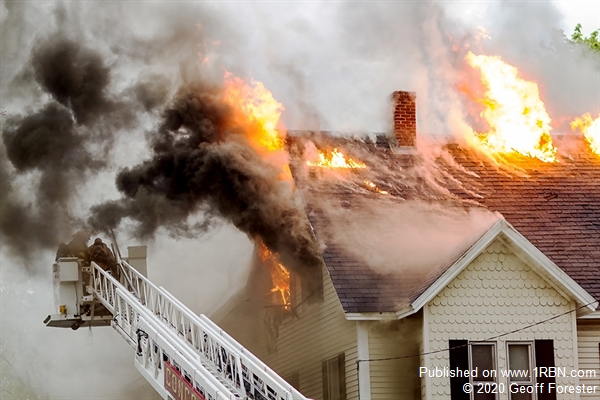 Photo by Geoff Forester Heavy fire burns through the roof as Concord's Tower 1 gets into position. 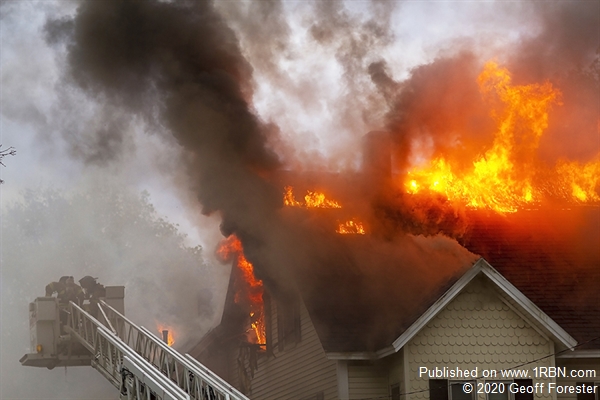 Photo by Geoff ForesterHeavy fire and smoke through the roof ! 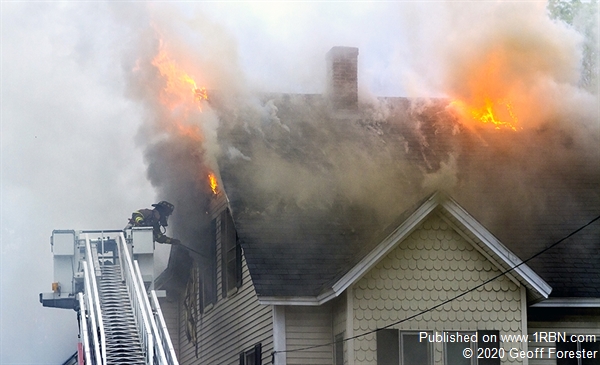 Concord, NH - A two-alarm fire raged in a four-unit apartment building at 266 North State Street on Friday, May 15th.

Concord Fire Alarm dispatched the building fire and reported smoke showing, seen from the cameras located in the Fire Alarm Office, as companies raced to the scene at 6:19 P.M. Just up the street from Central Fire Station, Battalion Chief 1 Derek Kelleher arrived at 6:22 P.M., reporting heavy smoke and fire showing from a three-story building and immediately requested a "working fire" assignment.

The fire appeared to have started in the rear of the building when tenants suddenly smelled smoke. As they started to investigate they saw smoke and flames in the back of the building and started to flee immediately while calling 9-1-1. A second-alarm and audible alarm, calling in off duty city firefighters, was ordered by Battalion 1 at 6:28 P.M.

As firefighters made an aggressive interior attack and conducted searches to make sure the residents had escaped, heavy fire took over the attic and burned through the roof. One firefighter was transported to Concord Hospital. A General Alarm was ordered at 7:08 P.M., summoning the entire call back of off-duty city firefighters, along with an additional mutual aid ambulance to the fire scene.

The fire was brought under control at 7:51 P.M. Crews had extensive overhaul and did not clear the scene until 9:30 P.M. The fire is under investigation.