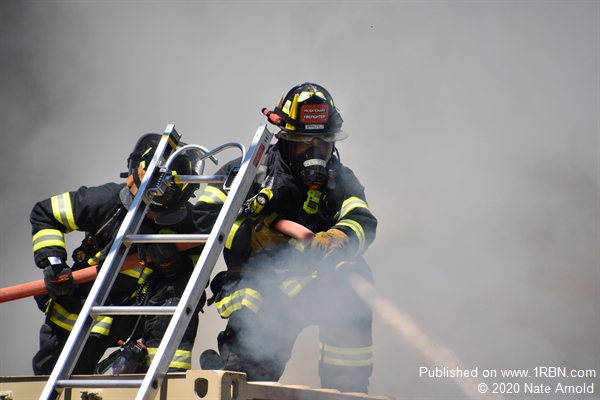 Photo by Nate Arnold Firefighter Bill Penkala plays his attack line into the dumpster from on top of a storage container.

A well involved 30 cubic yard construction dumpster fire threatened a High Rise apartment building under renovation in downtown Springfield on Thursday May 14, 2020.
Springfield fire dispatch received a 911 call for a dumpster on fire on Harrison avenue in the Metro-Center section of the city shortly after 1:00 p.m. and, per protocol, dispatched a single engine company to handle the situation. Engine 1 arrived on scene 4 minutes later to find out that the dumpster was a 30 cubic yard roll away type construction dumpster that was butted up against the Chestnut Park apartment complex, one of three high rise towers in downtown Springfield. With heavy smoke and fire venting from the dumpster and over concern the fire may have extended into the tower which is under going a multi-million dollar renovation project, Engine 1 requested dispatch fill out the high rise assignment which, in Springfield, brings three additional engine companies, three truck companies, the Rescue Squad and multiple chief officers to the scene.
As a precaution, while several companies worked to extinguish the fire in the dumpster, later arriving engines brought high rise packs into the building and ready them to make the stretch from standpipes if need be. The high rise packs would not be needed this time as crews brought the dumpster fire under control before it could extend into the building. The cause of the fire remains under investigation by the SFD Arson Squad.