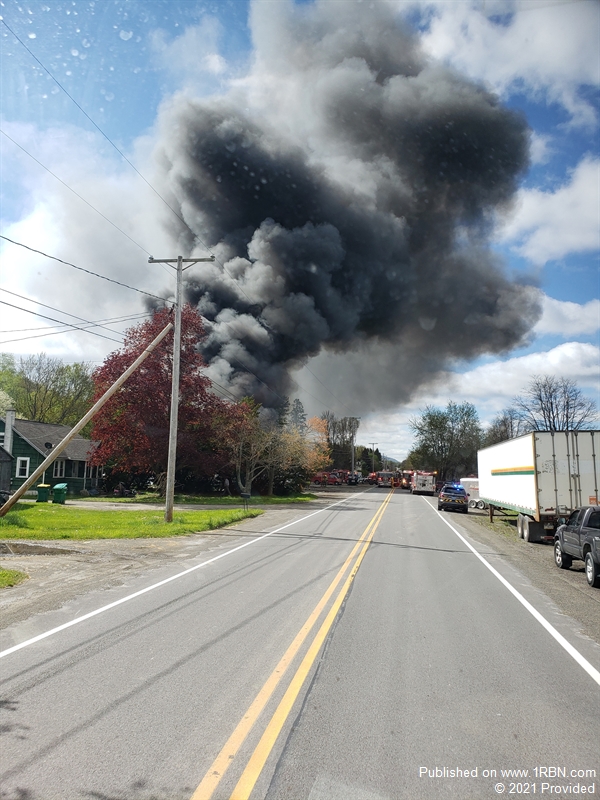 Photo by ProvidedTower 59 arriving on scene. 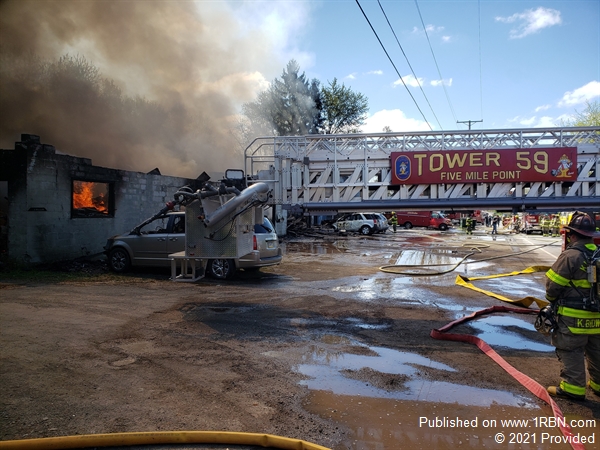 Photo by ProvidedTower 59 waiting for tankers to return with water to continue master stream ops. 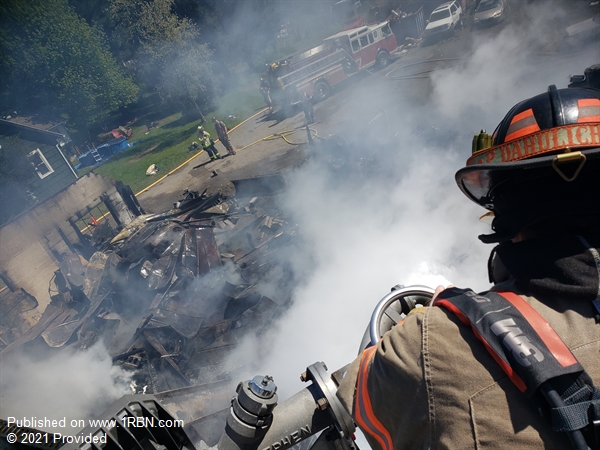 Photo by ProvidedView from Tower 59 as they continue to soak hot spots. 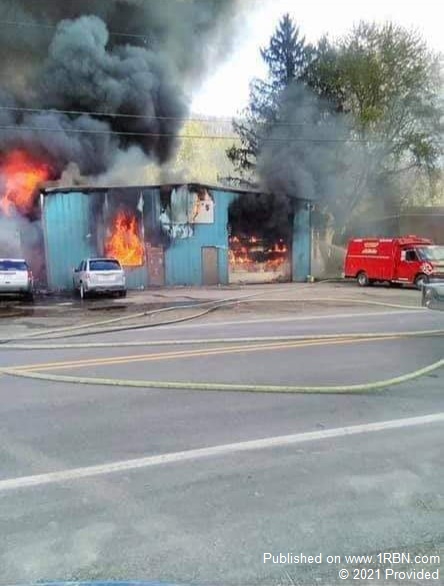 Photo by ProvidedFire spreads to the south exposure building. 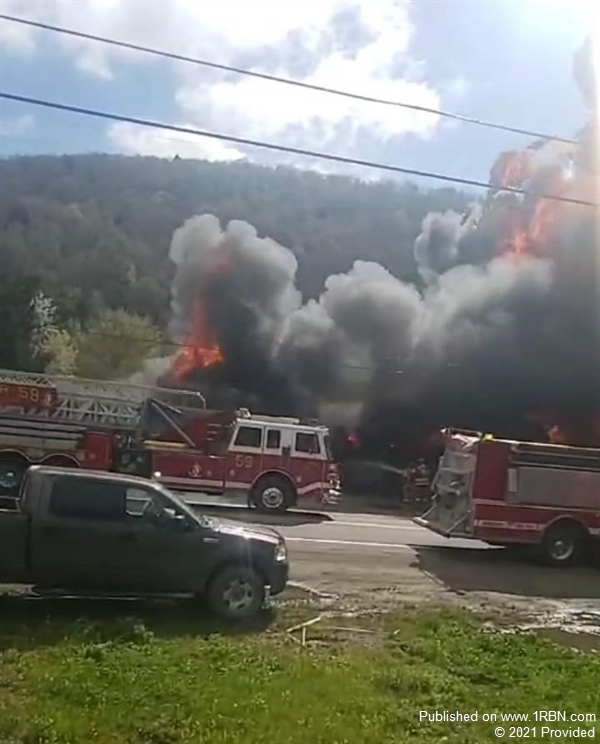 Photo by ProvidedHeavy fire conditions at the north end of the building. 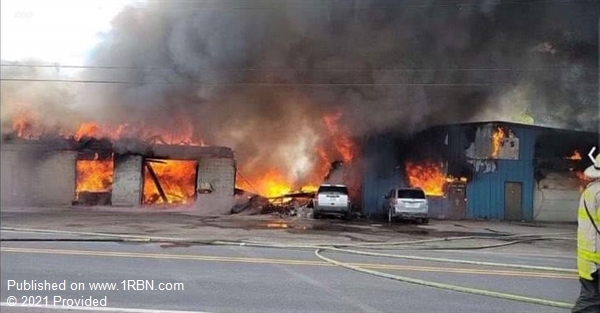 Photo by ProvidedHeavy fire conditions throughout the building. 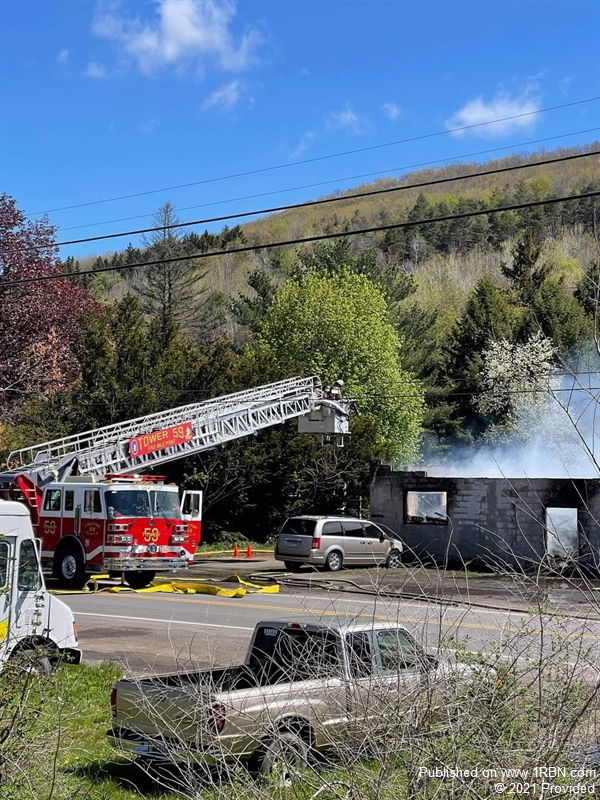 Shortly after 0900 hours on the morning of May 12th, 2021 Susquehanna County PA 911 center dispatched Great Bend PA Fire and EMS for a reported structure fire at Marv's Auto Repair at 26854 State Rt 11. A Great Bend Chief nearby quickly reported heavy black smoke visible and requested a 2nd alarm. Initial request to Broome County included Tower 59 from Five Mile Point Fire and Pumper Tanker 38 from Kirkwood Fire along with Broome County Fire Coordinators. Within minutes and before these units had even responded Great Bend command requested the 3rd alarm which added Engine 59, Tanker 38, Engine 54 from West Windsor. An additional request was made for Pumper Tanker 46 from Conklin Fire very shortly after.

As Pumper Tanker 38 and Tower 59 went enroute Broome County advised that Susquehanna County was reporting heavy fire in a 100' x 40' block and steel auto repair garage with multiple major explosions and serious exposure issues to a 50' x 100' Steel garage next door. Upon arrival Broome County crews were faced with heavy fire conditions involving vehicles, 55 gallon drums of multiple vehicle fluids, and acetylene tanks. Multiple explosions continued to happen as crews stretched lines, set up the aerial device, and supplied water. Tower 59 would be situated at the north end of the building to provide master stream operations. Engine 54 would eventually be moved to the B/C corner of the building to help cool a pile of acetylene tanks. Pumper Tanker 38, Tanker 38, and Pumper Tanker 46 would be used to shuttle water from New York into PA for crews on scene. Engine 59 would be used to fill tankers at the hydrant across the NY stat border.

As the fire progressed Command struck a 4th alarm. In the process Tanker 59, Pumper Tanker 28 from Windsor Fire, Engine 58-2, and Tanker 58-2 from Town of Binghamton Fire, and FAST 25 from Endicott Fire were all dispatched to the scene. Engine 58-2 was used to supply tankers with water from the Boat launch in Hallstead and FAST 25 would supply RIT at the scene while the tanker 59 and 58 would shuttle water at the north end and Pumper Tanker 28 would shuttle water at the south end. While crews were operating on scene Vestal Fire (32), West Colesville Fire (51), and City of Binghamton Fire (21) were placed on standby. Most Broome County Units would clear the scene about 12:30 hours but Engine 58-2 and Tanker 38 would remain on scene until 14:30 hours. Departments from four counties in Pennsylvania and New York operated at this fire.