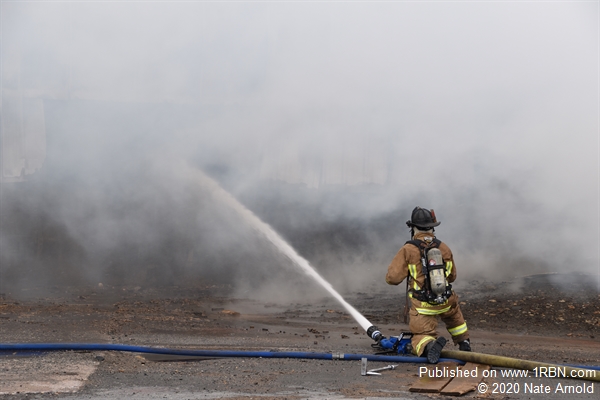 Photo by Nate Arnold A blitz gun plays into the Bravo side of the building on Western Ave. 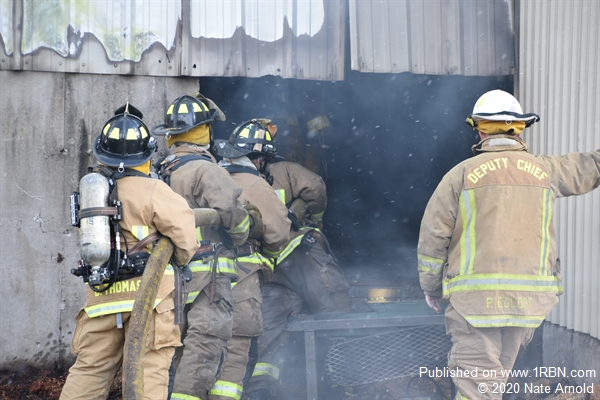 Photo by Nate Arnold Chief of Department Patrick Egloff watches as his fire fighters advance a big line into the Alpha side of the storage building.

A large fire burned undetected for a period of time on a lumber company's property that was set back over two thousand feet from the nearest main road in Westfield on Saturday May 9, 2020.
By the time yard employees who lived in the neighborhood noticed the fire and made the call to Westfield Fire-EMS, it had taken total possession of a single story metal clad "butler building" that housed thousands of pounds of scrap lumber, shipping pallets and large quantities of saw dust. When Westfield jakes arrived on scene to a report of a "shed" fire, the size of the "shed" immediately caused Deputy Chief Eric Bishop to strike a second alarm. To compound problems on scene even more, sustained wind gusts of 20 miles per hour were fanning the flames and the closest hydrant was out on Western Avenue, requiring a 2,300 foot LDH hose lay and two of the departments four engines to relay pump within that 2,300 ft. stretch.
Crews used what weak water pressure they could muster to lob streams into the building from all sides and spent most of the afternoon and evening battling the blaze while mutual aid companies covered the city. The cause of the fire was traced back to a wood fired furnace the owner had used inside the building earlier in the day.