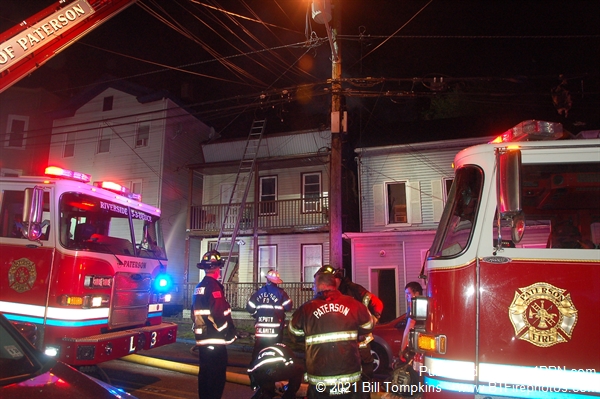 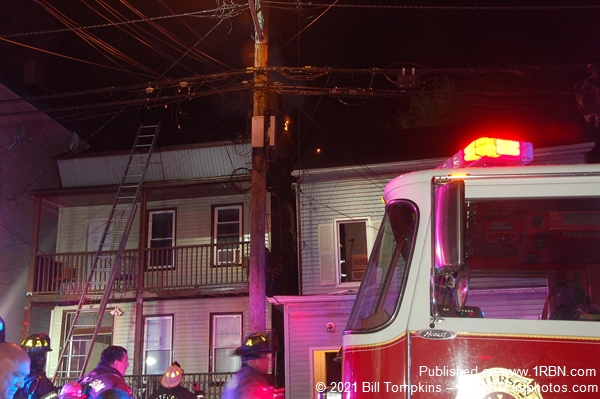 PATERSON, NJ - Initially trapped inside a burning building, 10 residents and rescuers found themselves trapped in a rear yard as flames spread to three dwellings on May 7th.

Paterson fire units responded just after 3:00 A.M. to 104 Lafayette Street. Police units had arrived first and observed heavy fire from the rear of a two-and-a-half story frame with close exposures on both sides. The flames were venting out of the second floor and extending to the attic and roof of the original fire building, and extending to the exposure buildings on both sides.

Police units removed 10 residents, including one that was handicapped from one building to a rear yard, but found themselves trapped there due to heavy fire conditions and a fence. Firefighters were notified of the situation and were able to cut the fence and allow all to escape.

Flames broke through the roof of the original fire building as a second-alarm was sounded. With the fire extending to both exposures, a third-alarm was transmitted. Companies operated in an offensive mode in all three buildings and were able to knock down the heavy fire in short order. All visible fire was extinguished by 3:45 A.M., and the fire was placed under control at 5:00 A.M.

The fire was held to the three home, but a total of 17 residents were displaced.