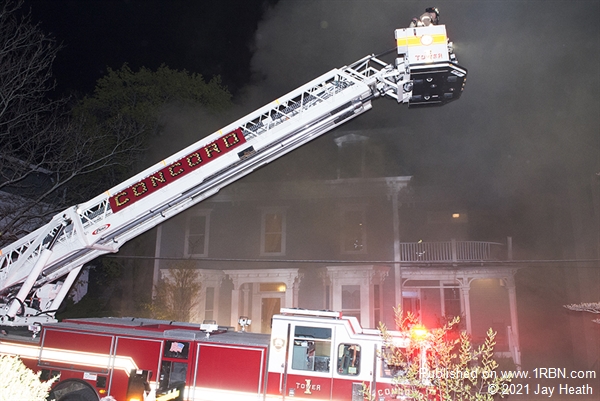 Photo by Jay HeathHeavy smoke billows through out the large historic condominium building in downtown Concord as Tower 1 goes to the roof to ventilate. 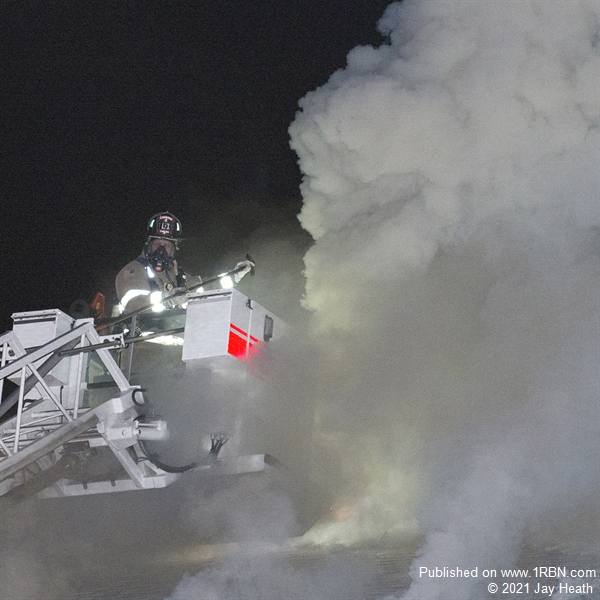 Photo by Jay HeathConcord Tower 1 ventilates the roof as heavy smoke pushes out. 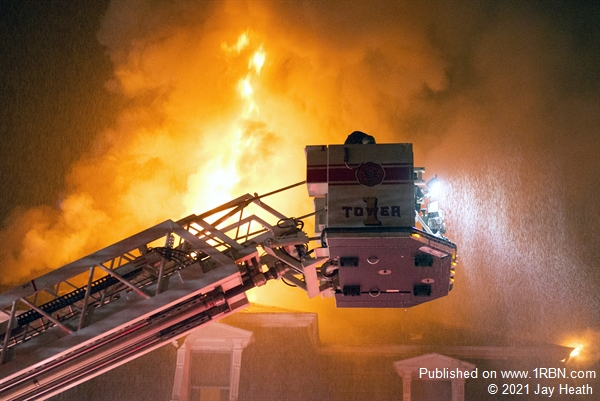 Photo by Jay Heath Heavy fire erupts from the roof. 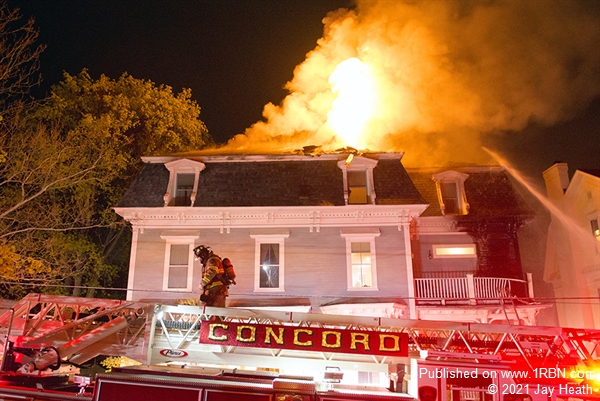 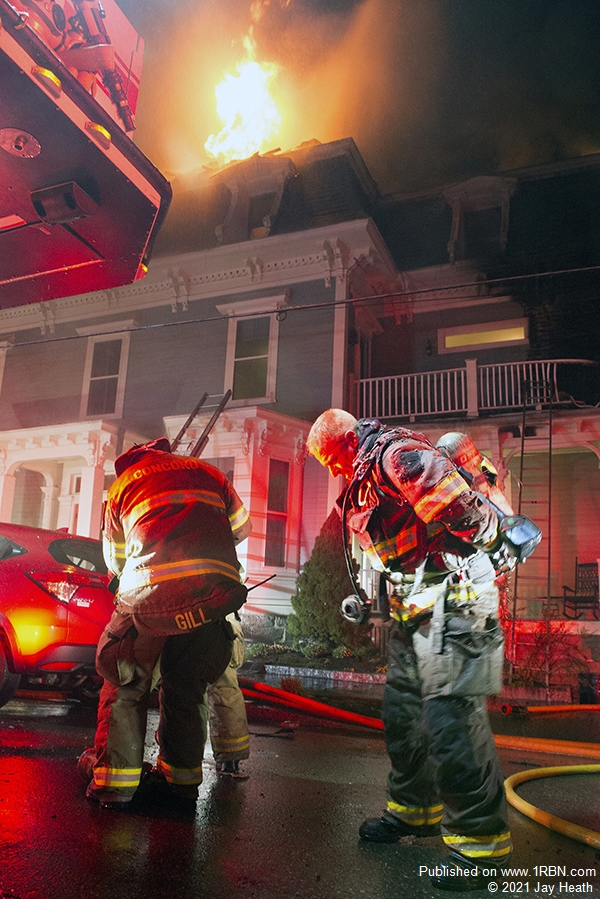 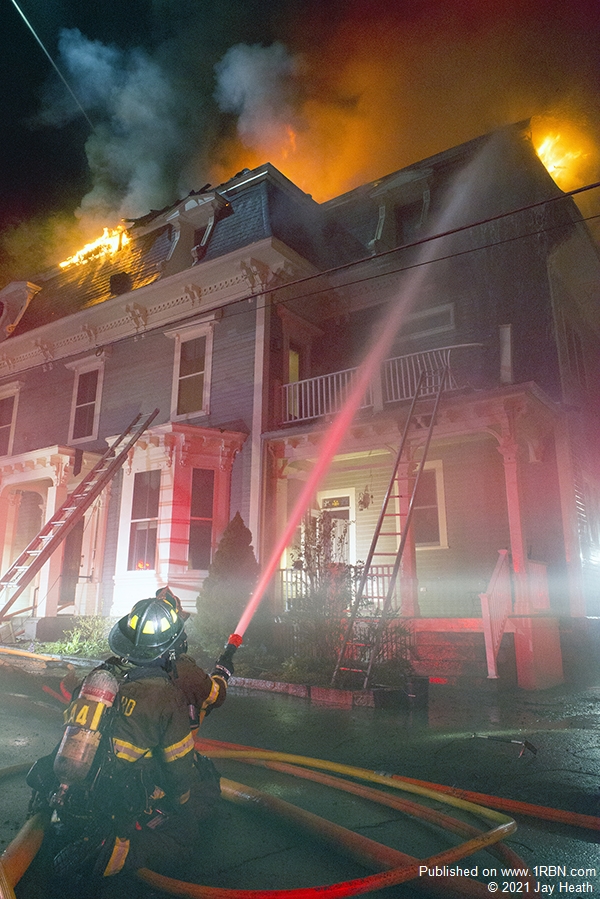 Photo by Jay Heath Firefighters withdrew from the building to knock down the fire extending through out. 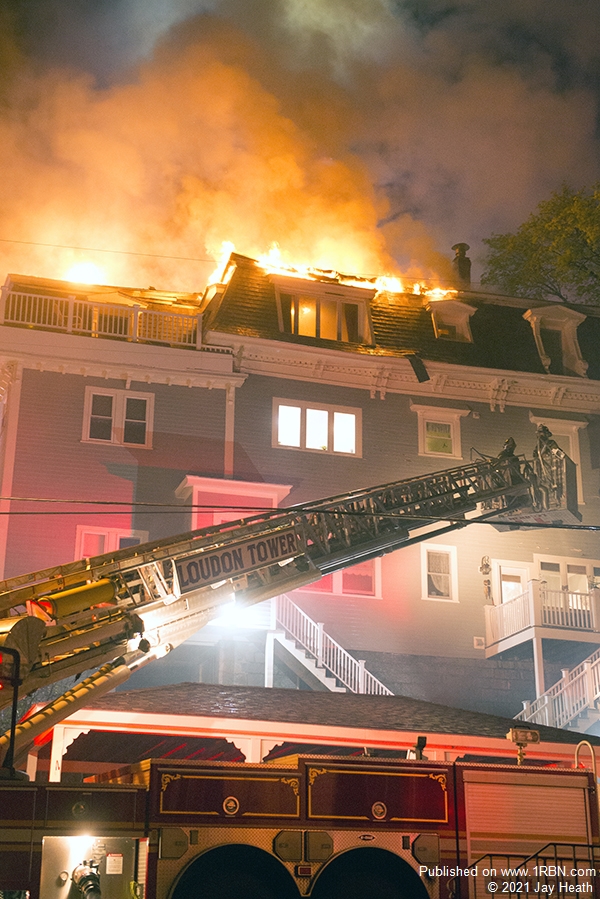 Photo by Jay HeathLoudon's Tower operates from the rear of this large 3 story building. 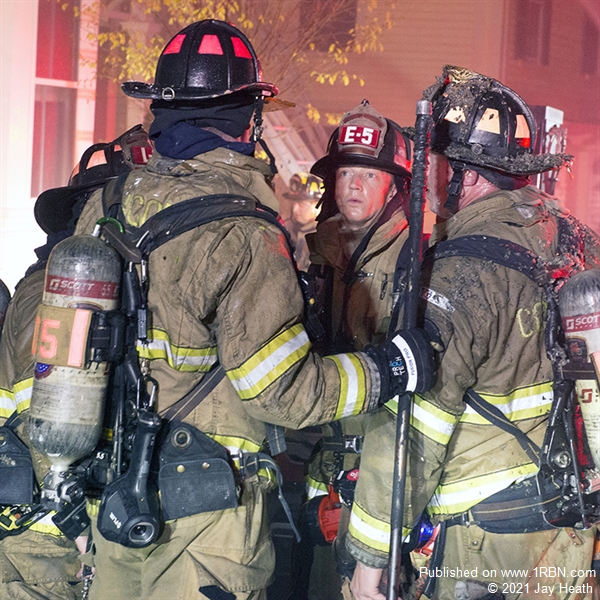 Photo by Jay HeathConcord firefighters regroup to go back inside.

CONCORD, NH - For the second night in a row, city firefighters battled another major fire on April 28th.

Concord Fire Alarm dispatched the Box for a "porch fire" in the downtown section of the city at 32 Merrimack Street at 12:31 A.M. First due Engine 4 arrived and reported fire showing from a second floor porch that was rapidly extending into the third floor and attic. Fire companies initiated search operations and an aggressive interior attack. All five occupants of the building were able to self-evacuate and one cat was rescued by a Concord firefighter.

A Working Fire was transmitted by Battalion 3, BC Manning, and Tower 1 immediately went to the roof for ventilation as companies stretched additional hose lines. Due to the size and age of the building the fire entered multiple void spaces between walls and floors, creating very challenging firefighting conditions, reported Concord Fire Chief Sean Brown.

The large four-unit condominium building, known as the Historic King House, was built in 1880. A second-alarm was transmitted with special calls for two additional tower ladders to the scene as fire spread throughout the building. The fire eventually went to four alarms, bringing in mutual aid from 18 surrounding communities. About three-and-a-half hours later, the fire was brought under control at 4:08 A.M. Chief Brown said there were no injuries reported and the fire is under investigation.

Concord Firefighters had a flurry of activity all throughout the 24-hour tour, as firefighters extinguished a small fire in an attached storage area around 4:31 P.M. in the Penacook Section of the city, along with numerous other fire and EMS calls.