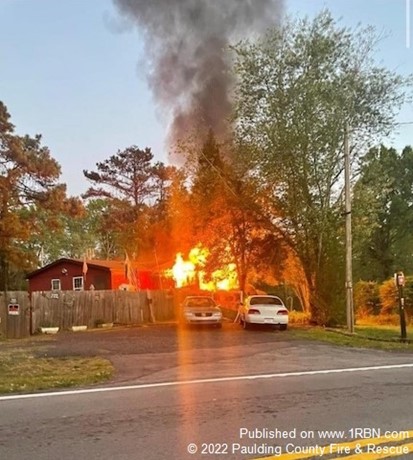 Prior to arrival, an additional caller, identified as a family member, advised an elderly female might be at home and would not be able to get out on her own.

Approximately 5 minutes following dispatch, a Deputy from the Paulding County Sherriff’s Office was the first to arrive on the scene. Despite encountering heavy fire and smoke conditions, the Deputy attempted to make entry into the home but was pushed back by the intense heat and flames.

PCFD’s first Engines arrived at 8:33 PM and quickly initiated fire suppression and search/rescue operations. Sadly, crews located the body of a female victim under debris from fire-related structural collapse near the front of the mobile home.

Investigators from the State of Georgia’s Fire Marshall’s office are leading an investigation to determine the cause & origin of the fire.

Questions regarding the victim may be referred to Paulding County’s Coroner who is coordinating with the Georgia Bureau of Investigation’s lab for positive identification and determination of the cause of death.